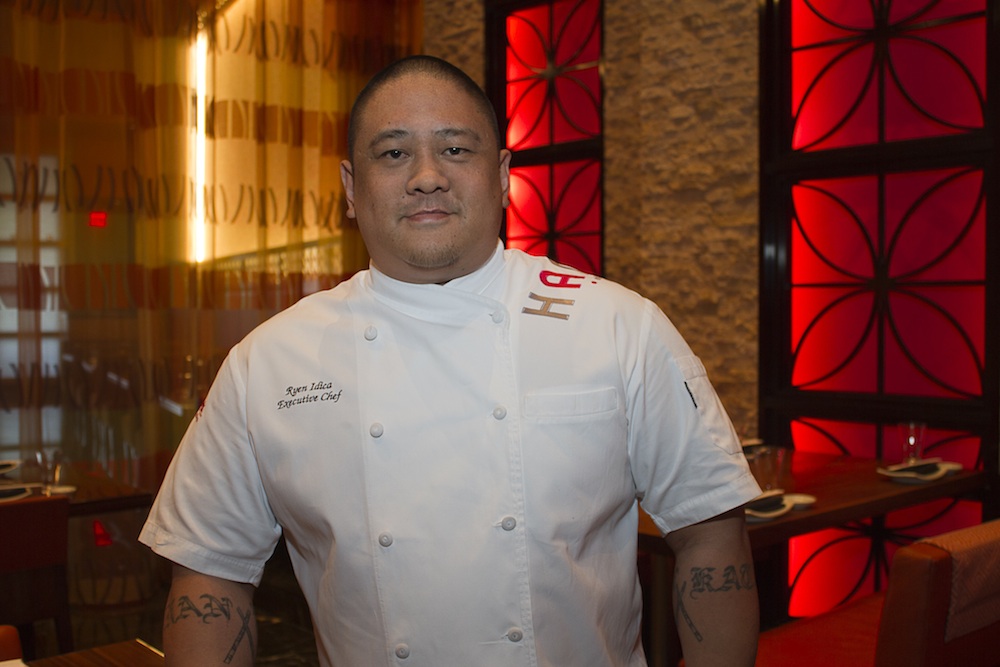 Chef Ryen Idica worked at Zippy's Restaurant in Hawaii while in high school, where he decided to follow his calling in the food industry. He studied at what he calls "the School of Hard Knocks." He helped oversee operations as sous chef at Vino's Restaurant in Kapalua, Hawaii, and then as executive chef at Sansei Restaurant & Sushi Bar in Honolulu. He hit the mainland, heading to Aspen, Colo., where he continued to develop an arsenal of experience with modern and contemporary Japanese cuisine, working under various chefs, including Jon Maza and Taka Sama (Takah Sushi), master sushi chef Kiyomi Sano (Kenichi) and Nobu Matsuhisa and Noboku Kang (Matsuhisa Aspen). He arrived in Las Vegas during the blazing hot summer of 2005 to work as the room chef of Restaurant 808 at Caesars Palace and then as a consulting chef and executive sushi chef at Sea Stone Restaurant & Sushi Bar. Now he's the executive chef of Hachi at Red Rock Resort. Here he talks about some of his favorite Hawaiian restaurants around Las Vegas.

Which Vegas restaurants do you turn to when you're not working?
I love to eat at comfort food places! I eat at restaurants that take me on my Hawaii mind trip, with a taste of my home, which are the home cooked meals and smell of everyday eating in Hawaii. Some of my favorites include Thelma's Filipino Restaurant (Hawaiian Ilocano style of food), Aloha Specialties (Hawaiian food) in the California Hotel and Wo Fat (Hawaiian-Chinese style food).

What dishes are most memorable?
At Thelma's, I always get the Thelma's Special, which features chopped up pieces of roasted pork belly with garlic, chilies, tomatoes, onions, green onions and their special sauces; Sari Sari, an everything soup featuring pork, long beans, tomatoes, onions, garlic, shrimp, bok choy and a savory broth; and the fried rice omelet featuring bacon, special Portuguese sausage, onions, rice with an herb mix and lots of love wrapped in an egg omelet.

At Aloha Specialties there is so much to choose from! But I always get my favorites including the tripe stew, which is a Hawaiian version of Menudo that comes with rice and macaroni salad; Spam musubi; and classic saimin, a Hawaiian-style ramen featuring Japanese ramen noodles, rich broth, char siu pork, cabbage, spam and some wontons, with a side of Chinese hot mustard. To keep those good flavors pumping, I have the teriyaki chicken sandwich featuring grilled marinated teriyaki chicken thighs served on a sesame burger bun with grilled onions and nice slap of mayonnaise. For some reason it reminds me of soup and sandwich, on a larger scale.

At Wo Fat, my favorite Hawaii-style Chinese comfort food, every dish tastes way different from what people taste in other Chinese restaurants, from the flavor to the texture. My favorite dish is the Crispy Gau Gee Mein with cake noodles featuring deep fried rectangular wontons filled with oily goodness, crispy baked cake-layered chow mein noodles sautéed with Asian root veggies, shrimp, chicken, chestnuts, squid, and a savory brown sauce. Another favorite of mine is the crispy oyster sauce chicken featuring crispy half chicken with oyster-gravy like sauce over won bok on a hot plate. My all-time favorite is the steamed pork hash with duck egg featuring steamed sesame essence of ground pork and herbs, and steamed duck egg. Everything is really good there, but these are items I always order.

Why do you enjoy going there?
I chose these places because no matter what day of the week, month, or year, the dishes are always the same. I guess it comes to consistency. It also gives me the feeling of being home, in Hawaii and having the Aloha spirit that I try to express in any restaurant that I cook at.
· All Coverage of Hachi [~ELV~]
· All Dining Confidentials [~ELV~]