Fremont Street Heads to The Linq and More New Updates

Share All sharing options for: Fremont Street Heads to The Linq and More New Updates

The roster of previously unannounced tenants heading to The Linq continues to reveal itself and the latest revelation includes some newly familiar names. Justin Weniger, Ryan Doherty and Kenna Warner, the team behind downtown's Commonwealth and Park on Fremont, are bringing their BLVD Cocktail Company to the outdoor retail, dining and entertainment complex.

BLVD will cover 2,292-square-feet and has recently declared an estimated construction valuation of $800,000. NuTone Construction, the same design-build force behind those two Fremont Street taverns, is assigned to the new project. They'll be occupying a space three doors down from the F.A.M.E. Night Market & Ultra Lounge.

The Linq serves as an augmented promenade to the main attraction of the area, the unmissable 550-foot High Roller observation wheel. An estimated 10 million riders will take the spin yearly, so pre-orders for the Line Roller Pass will cut down the wait time for tickets. While waiting for the 30 minute rotating journey, guests can enjoy a drink at the official bar, the newly named Launch Lounge and then afterwards heard over to the Sky Shop to load up on souvenirs. A Spring 2014 debut for the wheel looks increasingly likely. 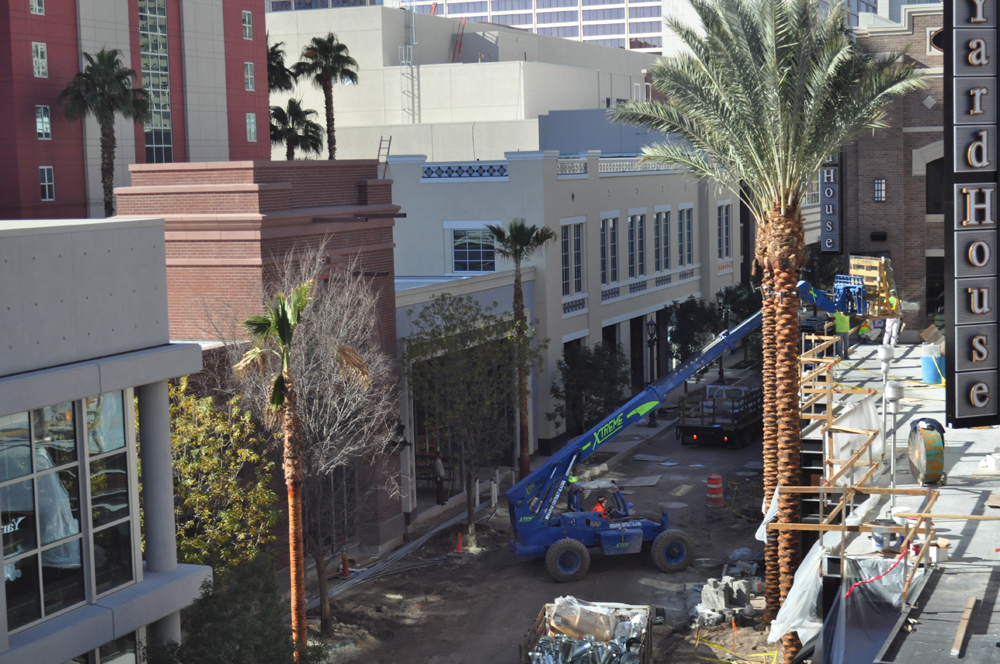 Across from the entrance to the High Roller, with one of the best views of the wheel, construction on Yard House has picked up speed. At almost 17,000 square feet, the chain's largest beer and casual food restaurant is being constructed next to The Linq's taxi drop-off and valet area. The space includes 4,500-square feet of patio seating on the first two floors, now taking shape, and signage is now place in anticipation of an early 2014 debut.

Also progressing on schedule is the Purple Zebra Las Vegas, a twist on a traditional daiquiri bar. The 4,230-square-foot concept carries a weighty construction valuation of $2,115,000 and is being constructed on the Flamingo Las Vegas side of The Linq.

The Purple Zebra name is borrowed from a reference in F. Scott Fitzgerald's 1920 novel This Side of Paradise, which features a daiquiri drunk character hallucinating a "purple zebra."

They are hoping to be one of the earliest business to open at The Linq, with an optimistic late December debut.
· All Coverage of The Linq [~ELV~]