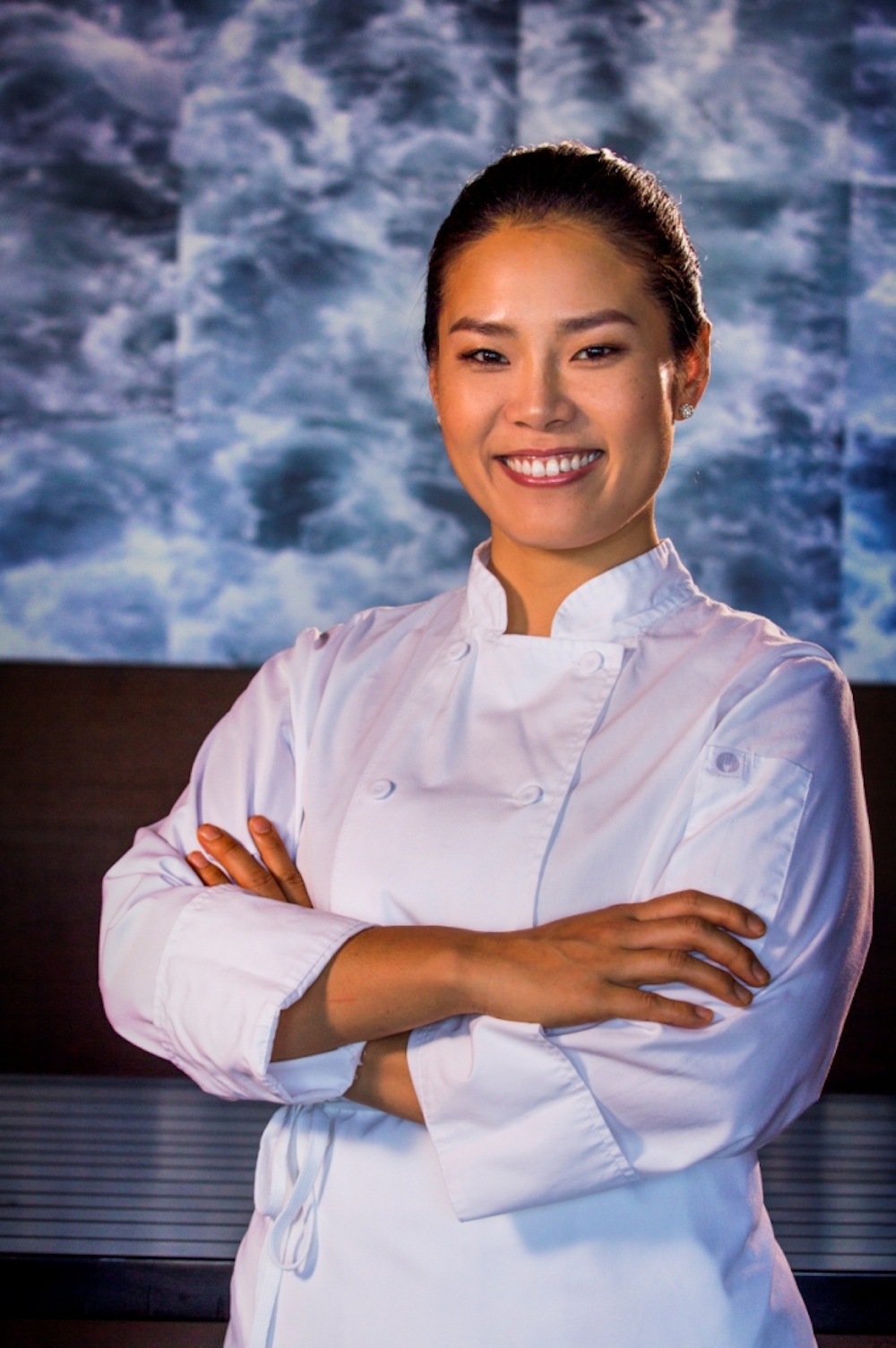 Seonkyoung Longest had only been cooking for three years when she decided to try out for Restaurant Express, the Robert Irvine-hosted show that gave eight contestants a shot at running their own restaurant at the M Resort. The contestants lived on a bus that traveled to different locations in Las Vegas and California with each weekly challenge narrowing the field down by one. Longest stuck to her idea of a restaurant with Asian fusion food, winning her chance to open a restaurant of their own. Last night, Jayde Fuzion debuted at the M Resort with Japanese, Chinese and Korean small plates. "I am super duper excited," she said right before the restaurant opened. "My lips are about to go to my ears right now. I'm probably the happiest girl in the world." Here Longest talks about life on the bus, what she thought her odds of winning were and more.

When you started this competition, did you really think you would make it to the end and win?
Hell, no. I was there and talking with everybody when we first met. I asked everyone how long they've been cooking and how much they were involved in restaurants. I was hoping I was not the only home cook there and I only had three years experience cooking. Everyone had cooked a whole lot and some even had a restaurant before. I thought, "Crap, I'm screwed."

When I was growing up in Korea, I worked in my parent's restaurant, and I thought that was just because they thought I was cute trying to help at age nine.

I started cooking since I came to America by watching the Food Network.

But you have your own cooking channel on YouTube.
When I very first started, I didn't have a job in Columbus, Miss. I was sitting in the house waiting for my husband to come home. Paula Deen, Rachael Ray, Guy Fieri, Giada Di Laurentiis, they looked so happy cooking. That's how I started cooking.

My husband was impressed with my skills and flavors. I started watching YouTube videos on makeup and thought, "Why don't I do a video?" I want to share with people. It's not that I think I'm better than people. It's one thing to share my joy with people. So far, I'm still doing it. All of the recipes from the show are on YouTube.

What was the most-difficult challenge for you on Restaurant Express?
Living on the bus with everybody. We didn't have personal private space. We were parking in RV spaces. We would hang out in the bus on a chair or the picnic tables. The shower or bathrooms were so far away. Definitely it was hard.

The challenges were hard too. It was a fun, once-in-a-lifetime experience.

Lots of times on the show I might of looked like crap and my mom even said, "Sometimes you look good and sometimes you don't." I told her I was trying to get ready on the bus.

So what was Adam really like? He really came across as a jerk, stealing your ingredients in the finale.
I really liked him. He even gave me a cookbook on French cuisine. I was thankful for that and I'm still looking at it and trying recipes.

I mostly talked to Jan.

[Adam] has his own sense of humor and not everybody loves it. It's a little cocky. At the same time he was funny too. He's a good guy

How long did you have between the end of filming and actually planning and executing Jayde Fuzion?
I started at M Resort in November. I was able to design it how I wanted to have it. This color or I want the menu to have these dishes. I was plating the dishes the way I wanted. I wanted this kind of cocktails. I was having fun.

Did you move here?
I did. By myself.

He's here with me now.

Can you talk a bit about the menu?
We have Korean, Japanese and Chinese all three countries. My dishes are bibimap with Korean rice, a Korean barbecue. Several of the items I made on the shows are on the menu — the crab salad I made on the first episode, the Korean fried chicken skewers I made on the food truck.

What about the sticky Korean barbecue ribs?
They're not on the menu yet. The ribs are totally Asian stye with a Korean touch. They're almost finger chewing good. I was putting lots of food on the menu and I totally forgot about that one. I would like to make that one of my signature dishes.

What are you most looking forward to showing people about Jayde Fuzion?
Finally sharing my food with people. That's what I'm most excited about. I've been sharing a lot on YouTube and people tell me how great it was.

This will be me cooking the food and bringing it to the table. I want people to have a full belly with my food.

Have you had any time to explore Vegas since all of this happened?
Yes, I have been traveling here before and actually got married here 4 1/2 years ago. I didn't know I would have a first job in Las Vegas. It's a special to me.

But have you been anywhere in Vegas since you got here?
I wanted to focus on opening the restaurant and when I'm not working at the restaurant, I'm working on my YouTube videos.

I go to Whole Foods a lot. I love organic food. My dad is an organic farmer in Korea. I learned from him that the food you put in your body is important. Right now you pay for the food but later on you'll have to pay the doctor.

In Mississippi, I shopped and Wal-mart and the commissary on base, which is not so nice for someone who likes to cook.
· All Coverage of Jayde Fuzion [~ELV~]
Seonkyoung Longest [Photo: M Resort]