Angelo Sosa on Opening Poppy Den One Year Ago

Share All sharing options for: Angelo Sosa on Opening Poppy Den One Year Ago 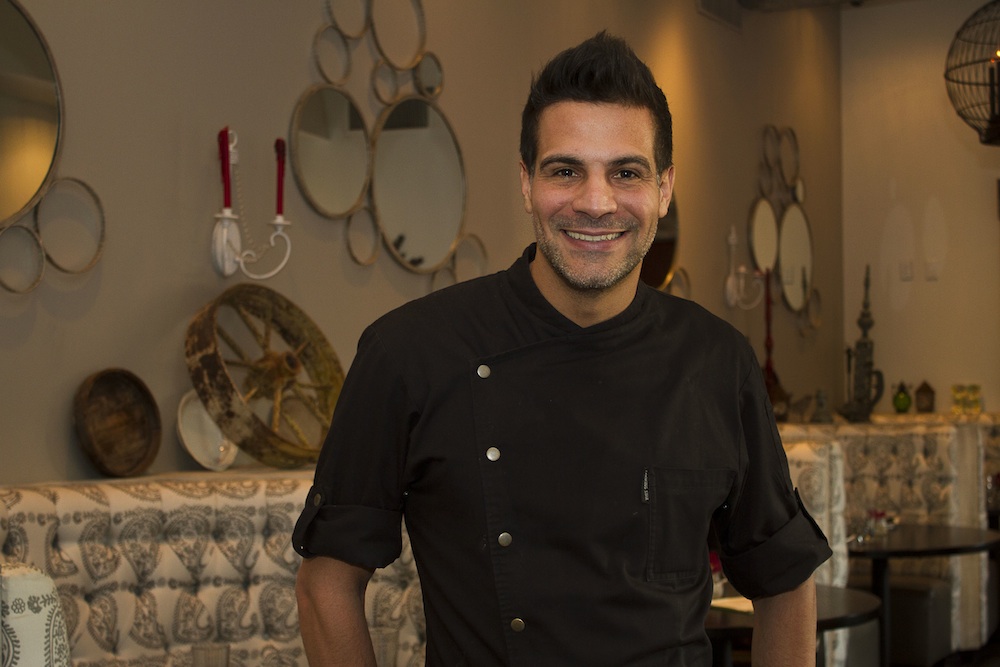 Just last year on New Year's Eve, Poppy Den opened, bringing Top Chef season seven runner up Angelo Sosa not to the Strip, but Tivoli Village. With all his experience in New York City, it seemed like it would be easy to come to Vegas and open. Not so. Here Sosa, who finally moved to Vegas full time in November, talks about listening to his guests, changing the menu to meet their needs, Top Chef dinners and his upcoming Iron Chef bout with Bobby Flay.

How did Poppy Den come together?
It was just magic. About three years ago, I came out here to do an event. I think it was Luckyrice.

Ever since then I had it in my head the Las Vegas is really culinary mecca of the world. It's a food play land and I really wanted to be a part of that.

I was in Vegas for five hours and looked at Tivoli Village. Our space and surroundings off Strip made it cool and alluring to me to be a trendsetter, foolishly or not, to come out here and give it a go

There are locals who don't go to the Strip. I really wanted it to be a destination for that. I really focused on feeding locals and the neighborhood and growing a strong business.

Why open a location in Las Vegas?
New York, you know, again it's really I think like Vegas. It has everything. Some of the best Asian food in the country is here — Lotus of Siam, Le Thai, little shops here and there. The food is more authentic than anywhere I've tasted throughout the country.

How has it been different in Las Vegas than in New York City?
Um, my lord, where to begin. Being off the Strip has been great, especially away from the pace of New York. It's challenging. I really have to hone in and listen to the guests and fine tune my dishes. At the end of the day it's really about the guest. That's been pretty amazing and eye opening to me.

You have to be very humble out here. They're the ones who sustain you.

What did you learn?
I actually I feel very blessed to be out in Summerlin. It helps me because I want to grow and have multiple restaurants. Summerlin helps me integrate in the community. On the Strip you don't have that rapport. I love to share and that's why I cook.

I have traveled the world and I want to tell the story of where I'm from and where I've been and that's important to me.

What were you thinking about in terms of design?
The decor was inspired by a country Asian chic home. It's very warm, very welcoming. Outside is more of an Asian garden. You'll see more coming in the summer with kumquats, jasmine and a Buddha waterfall to add some exoticism to the concept.

We just launched The Den. You can go downstairs and have a meal and enjoy the aromas of the garden or come upstairs after the meal and just chill and be dazzled by the cocktails.

How is Ken Henderson involved?
We have a very unique relationship. He's the older version of me. We share the same philosophies on how to treat a guest. We need to listen to the guest.

Ken is a local here, born and raised here. Integrated in the community and charities. I like to say we're like LeBron James and Dwyane Wade.

Can you talk about the decision to open The Den?
Being off the Strip here in Summerlin, is there a late night place? We're open until 2 a.m. It's a little oasis off the Strip with cocktails. The vibe is cool sexy. You can go outside and watch the sunset. Eventually we'll have hookah. We want to be your late-night option.

The menu has evolved and changed. We dialed in and listened to locals. The key word here is approachable. We have ramen, Peking duck and Asian dishes inspired by my travels.

Has Vegas embraced the restaurant?
I think we're definitely growing. With Ken involved and with the Den and changes to the menu, locals more receptive to the menu. We've been getting positive feedback.

The key here is want people to think this is a neighborhood place.

Six months in, what changed?
My gray hairs. Wow, I think what changed was understanding the demographic. We had no data. Tivoli Village was new. We've just been adapting and evolving and listening. That's why we're excited for these changes.

Does it seem like it's been a year?
In dog years.

What's the must order dish of the moment?
Hands down the Peking duck. If it's not the best duck you've had in your life, I will pay for your dinner. We cure it for three days, air and dry it. It's just ridiculous.

What's on tap for the future?
We're launching Iron Chef on March 2. I'm going against Bobby Flay. I'm pretty jazzed and fired up about that.

In the Den, we're launching a gay night.

We're looking to have a one-year anniversary party where we invite chefs, chefs from Top Chef and locals.

I'm super excited especially partnering with Ken, who brings an entertainment lifestyle aspect. I'm super excited for the outside to open with Buddha's Lounge outside. We'll turn that into an Asian garden with a reverse happy hour and make it cool.

We're doing these Top Chef dinners. We'll have a Top Chef come out and do a dinner. Those fans from the show can meet them and greet them and experience the real deal.
· All Coverage of Poppy Den [~ELV~]
· All One Year Ins [~ELV~]