Confirmed: Carson Kitchen Is Next for Kerry Simon

Share All sharing options for: Confirmed: Carson Kitchen Is Next for Kerry Simon

Not letting a very serious illness get in the way of a pioneering spirit, celebrity chef Kerry Simon is officially confirmed to be heading downtown with an American-focused restaurant.

First revealed by Eater Vegas back in August, Carson Kitchen will occupy a corner space, Suite 100 of the John E. Carson Hotel, described by Councilman Bob Coffin as a former "flophouse."

Joining Simon, but not yet announced, will be Le Thai's Dan Coughlin with Bocho, a 1,000-square-foot sushi restaurant upgraded with 1,150 square-foot upstairs lounge. Both sites will feature access and use of the interior courtyard. Carson Kitchen will possess the distinct advantage of a roof lounge. 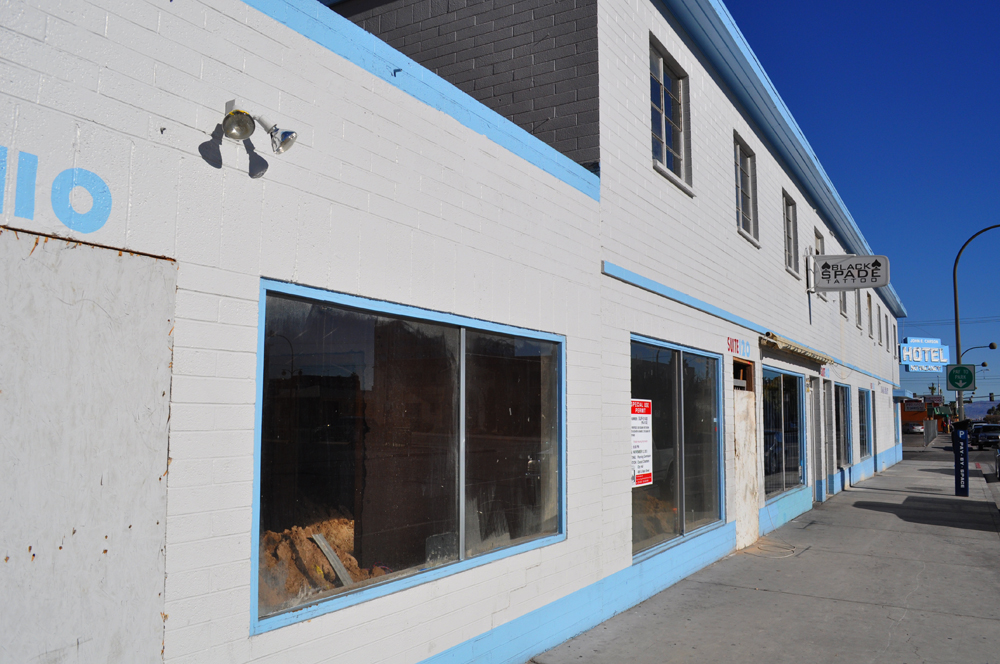 Construction on the U-shaped property has amounted to a complete renovation and the design is being overseen by Craig Sean Palacios and his Bunnyfish Studios. Their work on the new Inspire arts complex on east Fremont is set to be unveiled this month.

Construction is currently fast and furious, but a visual inspection indicates some way to go. No official timetable for completion has been released.

Nona Sivley, Hell's Kitchen season eight winner and former head chef of Kerry Simon's LA Market was scheduled to run the kitchen at the Carson. But earlier this month, Sivley was controversially dropped from her post running Pork & Beans at the nearby Container Park. The fast casual Pork & Beans is a Kerry Simon and Micheal Cornthwaite venture. Sivley had previously tipped the name of the restaurant as "Carson's Table."

Despite its humble purpose, the John E. Carson Hotel's motto used to be "The Heart of Downtown." Built in 1955, Zappos CEO Tony Heish and his Downtown Project redevelopment team bought the hotel for $2,060,514 in April 2012. Hotel rooms on both floors are being converted into re-purposed businesses. Eater Vegas has already reported business licenses being issued for O Face Donuts, tech firm Digital Royalty and Interactive Organics. Still operating during the current construction and Kerry Simon's immediate neighbor on the property is long-term resident Black Spade Tattoo.
· All Coverage of Kerry Simon [~ELV~]
· All Coverage of John E. Carson Hotel [~ELV~]