Name the Mystery Downtown Institution Up For Sale

Share All sharing options for: Name the Mystery Downtown Institution Up For Sale

Looking to take over a piece of Las Vegas history? A mystery real estate property now hosts a couple of for-sale ads for a family-owned Mexican restaurant run by the current tenants since 1970. But the tradition dates back even further. An eternity even, when measured in Las Vegas restaurant years.

For $1,275,000 you can be the proud owner of a "very established restaurant," with a "perfect boutique theme" in a "hot high traffic downtown location in the heart of the redevelopment action arts district!"

The owner and brokers will only reveal the actual location and name if a prospective buyer has the right credentials. But, as usual, allow us to provide some thoughtful speculation as to which institution is looking to sell.

For a million dollars and change, you'll receive a 2,000-square-foot restaurant and a 950-square-foot separate office. There's a decent amount of on-site parking and it's a location popular among visitors, lawyers and politicians who frequent downtown legal and government buildings.

Long-time customers are used to opening hours on Monday to Thursday from 11 a.m. to 4 p.m. and extended to 9 p.m. on the weekends. As a bonus, there is additional income from a billboard on property and a leased cell phone tower that stands in the parking lot. You will need to apply for a beer and wine license.

We have our informed guess on which restaurant is up for sale, after the jump. 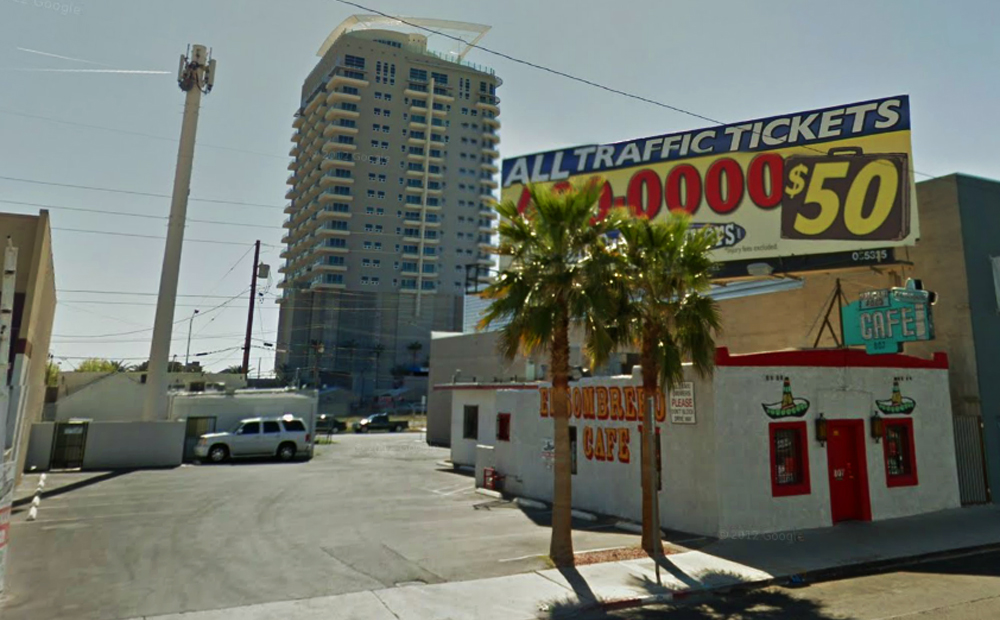 El Sombrero Cafe was opened by Clemente Griego all the way back in 1950, making it Las Vegas' oldest Mexican restaurant and almost the oldest restaurant of any cuisine. In 1970, his nephew Jose Aragon took over the place and has been there ever since.

The two property listings are confusing for a potential buyer, with marked differences in declared cash flow and the value of furnishings and inventory, but if you are in the market you'll work it out. Between the two descriptions it isn't hard to take the separate details to build a mental picture of a Mexican restaurant with large billboard on the roof that has been serving since 1970. And is located on Main Street. We believe it fairly safe to speculate that El Sombrero Cafe is for sale.

It has also been planned for quite a while. In 2010 Aragon explained the tough economy had forced the abbreviated weekday hours and he was already looking to semi-retire or sell-out.

El Sombrero is noted for made-from-scratch dishes and a happy unwillingness to compromise on the spiciness of its flavors.
· All Up For Grabs [~ELV~]