Get to Know Dario Cecchini, the Singing Butcher of Panzano

Share All sharing options for: Get to Know Dario Cecchini, the Singing Butcher of Panzano 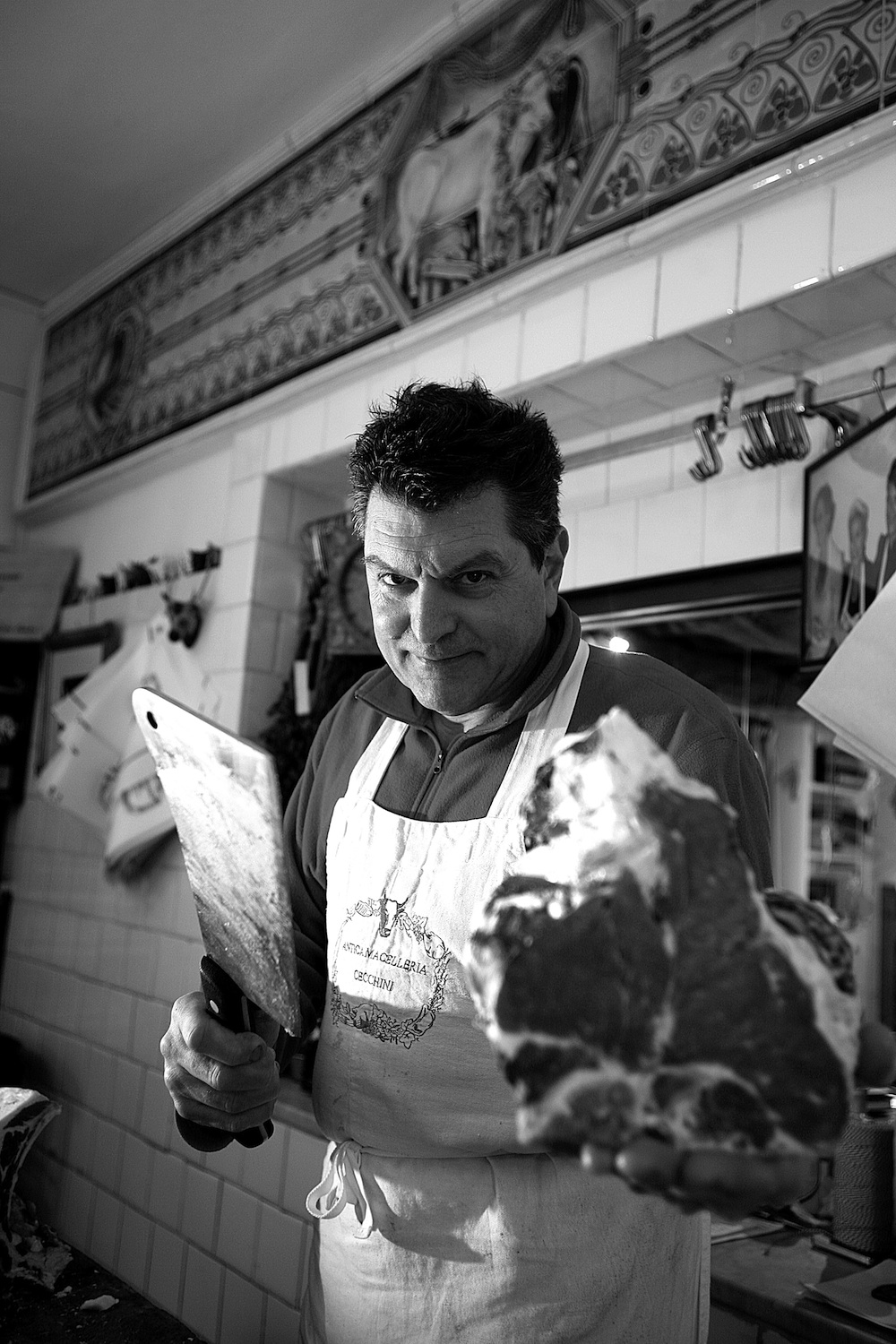 Dario Cecchini didn't want to be a butcher when he was growing up in Chianti, Italy, even though he represented the eighth generation in a line of Tuscan family butchers. Instead he wanted to be a veterinarian. In his third year of study, his father had taken ill and he got the call that he needed to come home immediately to take over the family business. Since he showed little interest in becoming a butcher while he was growing up, he had no education on the art. His dying father sent him to The Maestro, a local legend in the butchery world, to learn the trade.

That was 1976. Now Cecchini is known as the singing butcher of Panzano, a man restauranteurs and food critics alike call one of the best butchers in the world. In his little town of Panzano, he has two restaurants, Solociccia and Officina della Bistecca, where food fans flock to taste his fare and share his philosophy of using and respecting the entire animal. This weekend, he'll be part of the Winter in Venice celebration at the Venetian and Palazzo, cooking alongside Wolfgang Puck on Thursday night at Cut during the four-day La Cucina Italiana Food & Wine Festival. Cecchini makes his first visit to Vegas, where he says, "I want to smell the air, to get a feel for the energy that this city emits." Here, get to know the dishes he serves, his tips on ordering from a butcher and why he has a penchant for quoting Dante's Inferno.

You use Chianina beef in your restaurant. Will you be serving that at Cut?
In my restaurants we serve both Chianina and other meats. We are not bringing our own, as U.S. regulations to not allow us to.

You have your own Chianti as well. Can we expect to taste that?
I do not produce wine at the moment. As a sign of hospitality, in my restaurants and butcher shop, I serve Chianti wine made by my friend Vittorio. I have not brought it to Las Vegas. In my restaurant customers are welcome to bring their favorite wine with no corkage fee. You can enjoy the wine Vittorio makes, if you come to visit me in Panzano-in-Chianti, my small, wonderful village.

What should we look for when shopping at the butcher?
Look for an artisan butcher. In America there are many great meat craftsmen. You have an exciting, energetic movement, led by young, enthusiastic artisan butchers, across the country. This last October, I was in San Francisco and met a fabulous group called the Butcher's Guild. Look for small butchers, in Italy, America everywhere. They will lead you to the best. Industrial meat is another "animal."

You serve a rib-eye and a strip steak at your restaurant. Are those the two cuts of steak we should be ordering?
Not necessarily. Between my two restaurants (Solociccia and Officina della Bistecca), with two fixed menus, I serve cuts from every part of the animal. This is how I seek to show respect for the animal, this is my philosophy.

How do you choose your side dishes to go with your meat?
My choices are based on simplicity. We offer fresh, raw vegetables, dressed with our own extra virgin olive oil and Profumo del Chianti, my fantastic salt, along with traditional Tuscan white beans.

What are some of the forgotten cuts of meat that we should know about?
The Pope's Eye or Spider, the shank, beef knees, these are all superior cuts.

You gave up veterinary studies to take over your father, and family's trade. Any regrets after all these years?
No regrets. I am proud of carrying on the family business after the untimely death of my parents, and the way I seek to keep the business in line with the times. I hope I have succeeded. As our ancestors believed, I too believe that we should try to leave the world a little better than we found it.

Any correlation between the two mindsets, being a veterinarian and a butcher?
Both the vet and the butcher, if they do their job well, seek to give animals a good life, and a compassionate death. The butcher then works to respect the food that the animal has given us.

You're called the world's best butcher. Can you talk a little about why?
I do not know. I am an artisan butcher in the small village of Panzano-in-Chianti.

You didn't want to be a butcher, yet here you are now being called the world's greatest butcher. What switch flipped in your head to make that change in your life?
The desire to improve myself through my work.

You were an apprentice to a butcher known as The Maestro. Do you think being a butcher in your genes or learned?
One can always learn so much, from so many. What is important is to do what you love, and love what you do, with your heart, with your head, following your passion.

How are you going to pass along your knowledge to the next generation?
To all the young people who have a desire to learn, I recommend they follow their passion, as I have said in the previous response.

Tell me about your obsession with Dante's Inferno? I read that you quoted an entire canto on Italian MTV while butchering a side of pork.
Dante understood human passions, his greatest lesson is boiled down in the final verse of the last triplet: "... It is Love that moves the sun and the other stars."
· All Coverage of Winter in Venice [~ELV~]
Dario Cecchini [Photo: Courtesy]