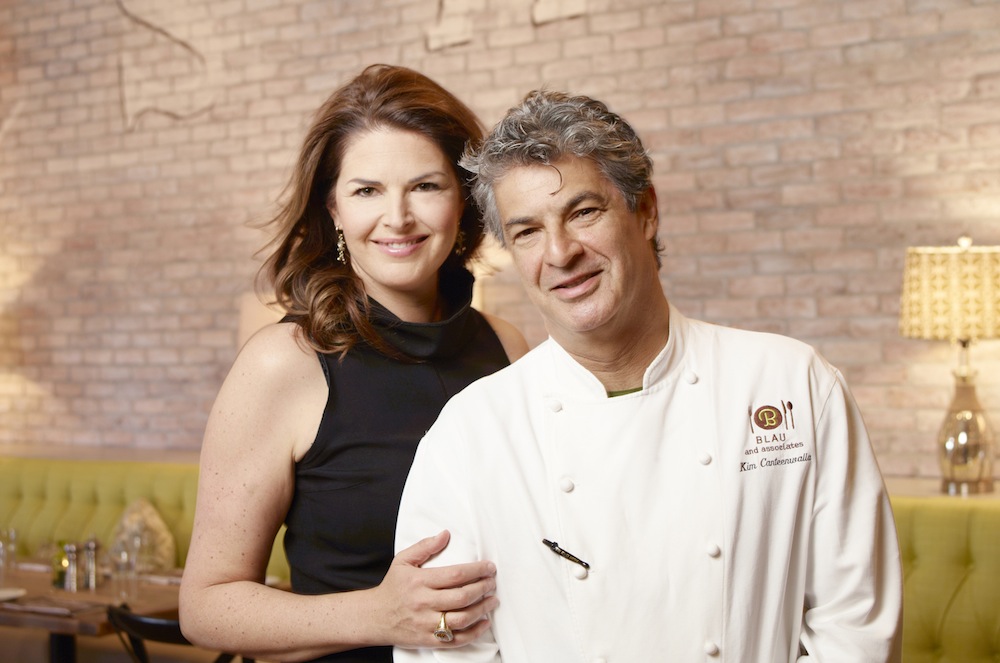 Honey Salt marked perhaps one of the biggest openings last year off the Strip. Helmed by über restaurant couple Elizabeth Blau and Kim Canteenwalla, the restaurant with lunch and dinner on the westside has become a go-to destination for those who don't want to venture to the casinos. Here, Blau and Canteenwalla talk about the first year of the restaurant, including how they came up with the concept, what dishes have struck a chord with guests and what future plans they may have.

We used to go to Nora's right around the corner. It was literally five minutes from our back gate. We used to enjoy it. We looked at a few spaces. We were thinking about dong something outside the casino world where it's really your own thing. We came to this, looked at it and loved it as a place we used to go to. We saw something that we could make it more than what it was.

The idea was we do a lot of entertaining at home We started taking bits and pieces from the house. First we were doing everything in the house. It just translated from there. It really became an extension of our home. The food, the parties we did from our home all extended to Honey Salt. It's grown from there. We diligently choose our partners Steve Jerome for the front of the house and Joe Zanelli. They treat the place very much like it's their place. We want to have the ability for them to be part of the team if we're going to grow the team further.

Elizabeth really saw a vision of the place as a warm comforting place. We didn't really copy anyone. She really nailed it and kept to it. We had some quarrels along the way about what to retain and what to keep. Her vision didn't waver. She knew what she wanted and we were both on board to do what we had to do to make this restaurant successful.

What changes did you have to make to the space?
KC: We really changed everything except the pizza oven and there was a wine refrigerator. We downsized that. I insisted on making a second entrance to the back kitchen. I knew the way the restaurant would work we would need two entrances.

The demo kitchen up front was all new equipment. Everything from the ceiling to the floor is new. It was Elizabeth's decision to put the bar up front. She had the vision to knock down the walls and make the bar a little bit of a buzz center and make that back room a buzz center.

The photographs are from a friend of ours. He took a lot of photos. The art is from Elizabeth's sister. One of the chandeliers taken out of our dining room.

Jason Lapin was instrumental in keeping it within budget. He kept all our spending to a minimum, because Elizabeth loves to spend. She found the tables and chairs. Jason found the tabletops in Minnesota. With the dry climate in Vegas they started cracking. We've replaced all the tabletops twice. The bar stools were replaced and now we're on our third rendition. The first were too uncomfortable. The second were so beautiful. They were really well appointed but for women it was a little too low.

EB: We loved Nora's, but this just feels so much more open. There was a lot of positive feedback.

As a consultant, that's what I've been doing. Everybody has a talent and I can look at a room good sense of space. The key was to make it more efficient operationally and aesthetically.

What did you learn in the past year?
KC: Just staying true to yourself and staying true to the vision. Being comfortable and doing a great good. Putting it in a comfortable setting with good price points. There's an energy in the place. I think people feel comfortable coming in with their families. We see a lot of families coming in there.

EB: I think I have learned the importance of social media firsthand. They're so much chattier on Facebook. There's so much from the blogs and various Websites. No one's ever going to completely replace newspapers and magazines. I think far more people are relying on Eater for their news.

How is running a restaurant off-Strip different than on the Strip?
EB: It's much more about he neighborhood. Sometimes I joke that our bar is like Cheers. It's wonderful. I get to see old friends and we've met so many new friends. The Strip is like changing your menu every night.

On a given night it takes me 20 minutes to get to the dining saying hello from old and new friends.

KC: Well for one, we have major repeat guests. On the Strip you try to achieve that as well. We do get guests from Red Rock or the Marriott. occasionally from the Strip. It's nice because these people are coming a long way in a taxi to come to your restaurant. You feel like you're dong something right.

We've got some staff who could easily be working at any five-star restaurant on the Strip.

What was the menu testing process like?
KC: It started at our home. Like I said, it was all in our home and it grew from there. It was a collaboration between myself, Elizabeth, Jason, Joe and Stephen Jerome. We cooked in the house for three to four weeks. We had the refrigerator in the garage. We had vendors coming into our neighborhood. We made things we enjoyed and things people enjoyed eating in our home.

The Tippan curry, my mother inspired that. She makes a great curry. We run specials inspired by the chef or what's fresh from the farmers in Pahrump. We get our greens and arugula from North Las Vegas. We keep working with the little guys as well, and it's expensive to work with these little guys. They're pricing is out of the ballpark.

EB: Again, a lot of the dishes like the tuna was something that I made in the summer. Kim had gone fishing and a friend of mine made this wasabi with crushed ginger in Connecticut. Kim amped it up.

Everything has an inspiration and a story. There's nothing on the menu that just happened to be there.

Have the guests embraced the restaurant?
EB: Oh, yeah, it's wonderful. We have people who come in twice a week for lunch and dinner. People have engaged with us. People will ask if I'm Honey.

Six months in, what changed?
KC: The menu continued to grow. The menu changes seasonally. We just did a menu change. Product comes in. Everything from cocktails and wine all changed along the way. A lot of signature things haven't changed.

The Midnight Rambler is simple with a perfect ice sphere and Bulleit rye. It's the perfect drink.

The scallop dish hasn't changed. Who would think the scallops would take off like that? I think it's our biggest selling entree. The filet is the biggest seller in most places.

EB: The chicken is the second biggest seller.

Most of the changes come with the seasons. Apple pie switches to peach pie. The soup changes from the Tuscan bean to a butternut squash. The arguments always are that I have too many ideas and the menu's too big. When we opened we didn't have the brunch menu. Corn beef hash to the pancakes and the monkey bread don't exist anywhere else.

We haven't really lost anything other than the crudités.

What's the must-order dish of the moment?
KC: I think the scallop is. It's got different components like pureed cauliflower with the vanilla bean in there. Then it's got the roasted cauliflower and the truffle sauce. East Coast scallops, these big sea scallops caramelized perfectly and getting a good hard sear on them. We finish them with a little sea salt and truffle.
At lunch time, probably the Biloxi chicken sandwich.

There are other dishes that come and go, but these are the dishes that people tend to turn to. The green juice. The salad in the glass. That's always going to be a go-to item, fresh and clean. The go-to on the dessert menu is the cookie with the salted caramel ice cream. I hope when we talk again I hope it's a different dish. Things will continuously grow.

What's in store for the future?
KC: The future is looking good.

We're looking at other restaurants. Honey Salt is never gong to be a chain restaurant. It does have the ability to grow. We've been offered locations a few times already. We held back. And I believe we're doing the right thing. We have the resources and the people and the infrastructure to keep growing. The key thing is we have good people.

EB: You know, with Simon and Buddy V's and Honey Salt, we're very complacent right now. We have a lot of cool concepts on paper like a funky barbecue or a casual steakhouse. We're sitting back and looking and exploring.
· All Coverage of Honey Salt [~ELV~]
· All Coverage of One Year In [~ELV~]