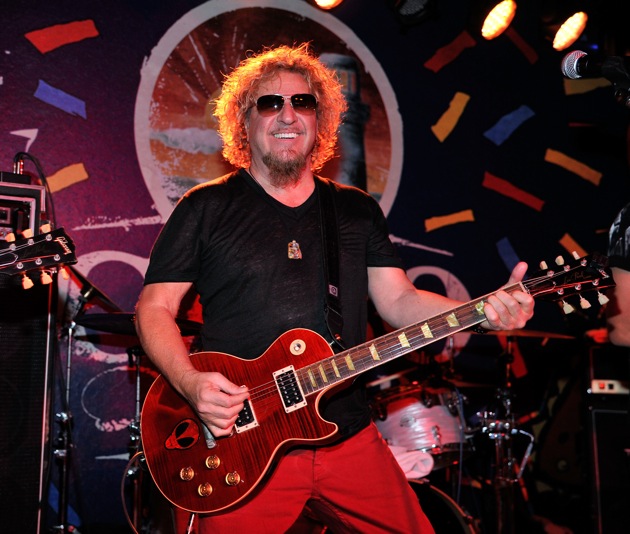 The Red Rocker Sammy Hagar celebrated the third anniversary of his Cabo Wabo Cantina inside the Miracle Mile Shops at Planet Hollywood Resort with a free performance on Saturday night. Hagar joined the house band from the flagship restaurant in Cabo San Lucas, Cabo UNO and Hagar launched into his hit, "I Can't Drive 55." His performance was projected on Miracle Mile's jumbo marquee for foot traffic on Las Vegas Boulevard. The hourlong show included "Mas Tequila," an acoustic rendition of "Eagles Fly" and the Van Halen single, "Why Can't This Be Love." [EaterWire]?

Actor Rob Lowe was spotted eating at the newly opened Citizens Kitchen & Bar at Mandalay Bay with a group of friends. The Parks and Recreation star, who was at Citizens celebrating a friend's birthday, ordered a burger before leaving with a group of 10. [EaterWire]

Olympian Michael Phelps dined at Heraea at the Palms during a friends and family preview on Friday. Phelps, joined by a small crew of friends, ordered a selection of piquillo pepper poppers, Alaskan King crab cones and artichoke spinach dip while sipping on Bulleit and diet Coke. [EaterWire]

Michael Bolton and Smokey Robinson dined with a large group at Tao Asian Bistro at the Venetian on Friday night. Paula Abdul also stopped by to visit them singers in the private dining room. The group ordered wine and sake along with crispy shrimp. Bolton and Robinson were spotted at Lavo Italian Restaurant at the Palazzo on Thursday night with both of their managers in Lavo's private dining room. Starting their meal with salad and bruschetta, Bolton then ordered eggplant parmigiano for his main course while Robinson ordered a chicken salad. [EaterWire]

Model and actress Milla Jovovich was spotted lunching with her family at Postrio Bar & Grill at the Grand Canal Shoppes at the Venetian on Friday. Milla ordered steamed PEI mussels for the table as well as the Tuscan bean soup and the corned beef reuben and a raspberry lemon drop to drink. [EaterWire]

Kelsey Grammer dined at Wolfgang Puck's Spago at the Forum Shops at Caesars on Wednesday and Thursday nights. [EaterWire]

Among the celebrities at the =opening of Heraea at the Palms for a Super Bowl party were model Selita Ebanks and singer Taylor Dane got the crowd going by singing her club hit "Tell it to My Heart." A crowd of NFL stars came to cheer on the competition during the football league's championship game including Greg Little of the Cleveland Browns, Michael Bush and Lance Briggs of the Chicago Bears, James Johnson of the Pittsburgh Steelers, Jalil Brown of the Kansas City Chiefs, Brandon Bostick of the Green Bay Packers and former San Francisco 49er Rock Cartwright. Also attending were former players Keith Bulluck and Kelvin Smith. [EaterWire]
· All Coverage of Star Watch [~ELV~]