Share All sharing options for: Gronk Forks Out a $9,615 Bar Tab at XS Nightclub

Welcome to Receiptrocity, bringing you the strangest and most entertaining receipts Vegas' restaurants have to offer. If you've got an interesting, notable or funny receipt, scan/photograph it and send it over to vegas@eater.com. 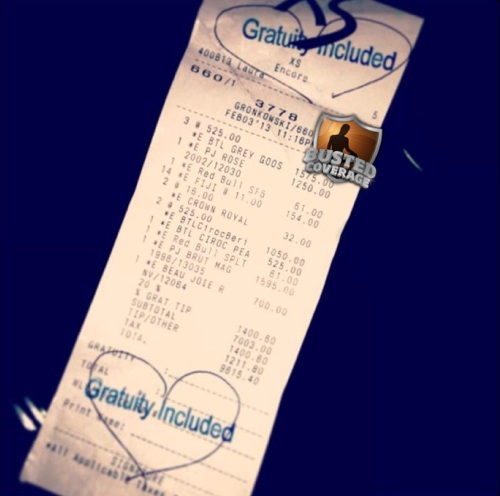 How much does the highest paid tight end spend on drinks while partying in Vegas for Super Bowl Sunday? Well, if it's Patriots tight end Rob Gronkowski, that bar tab runs $9,615. Gronk partied at XS Nighclub at Encore Las Vegas, where he ran around the club shirtless and body slammed a buddy on stage, of course.

Busted Coverage landed the big bar bill that includes $1,575 in Grey Goose, a $700 bottle of Beau Joie Champagne along with a magnum of Perrier-Jouet Brut for $1,595 and some bottles of Ciroc vodka for $1,050. Busted Coverage notes that the Beau Joie retails for $125 to $135, but marked up prices like that helped land the club in second place among the highest revenue-generating clubs in America.