While Downtown Vegas has already seen unprecedented expansion in the past year, that doesn't mean construction has let up. No less than 30 new restaurant, bar and lounge projects are under construction in Downtown Las Vegas. Delays galore have pushed back the openings on many of these projects that take over the Ogden, the Fremont Street East entertainment district and Neonopolis.

Some are just about ready to pop on the scene such as Rachel's Kitchen, Velveteen Rabbit and Mingo Kitchen & Lounge, while others including the restaurants going into the Downtown Grand will have to wait until fall.

With that, take a look at the what's about to come to Downtown.
Bradley Martin contributed to this article. 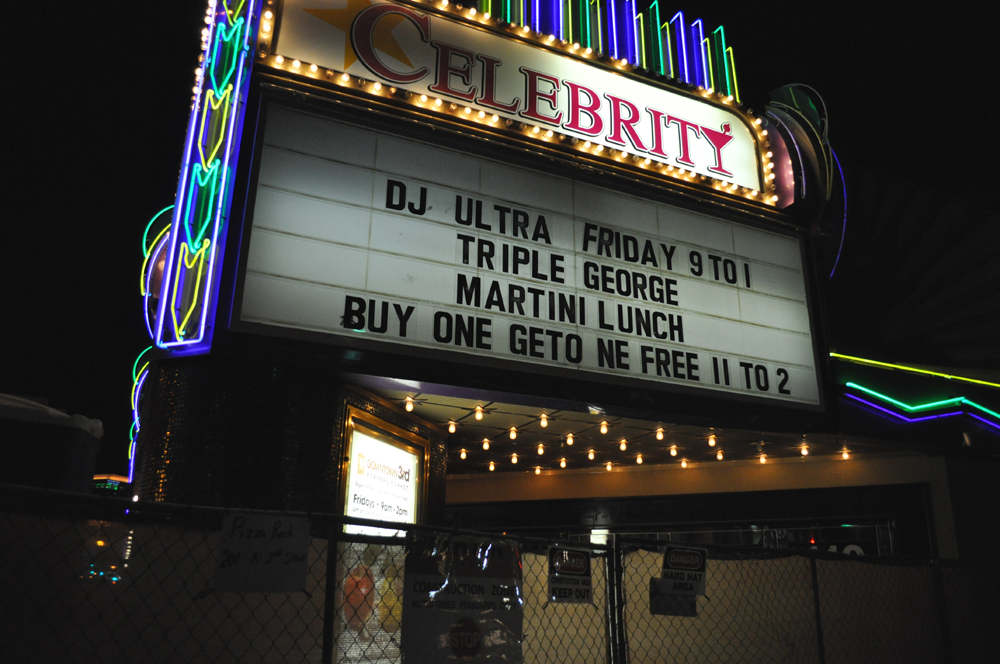 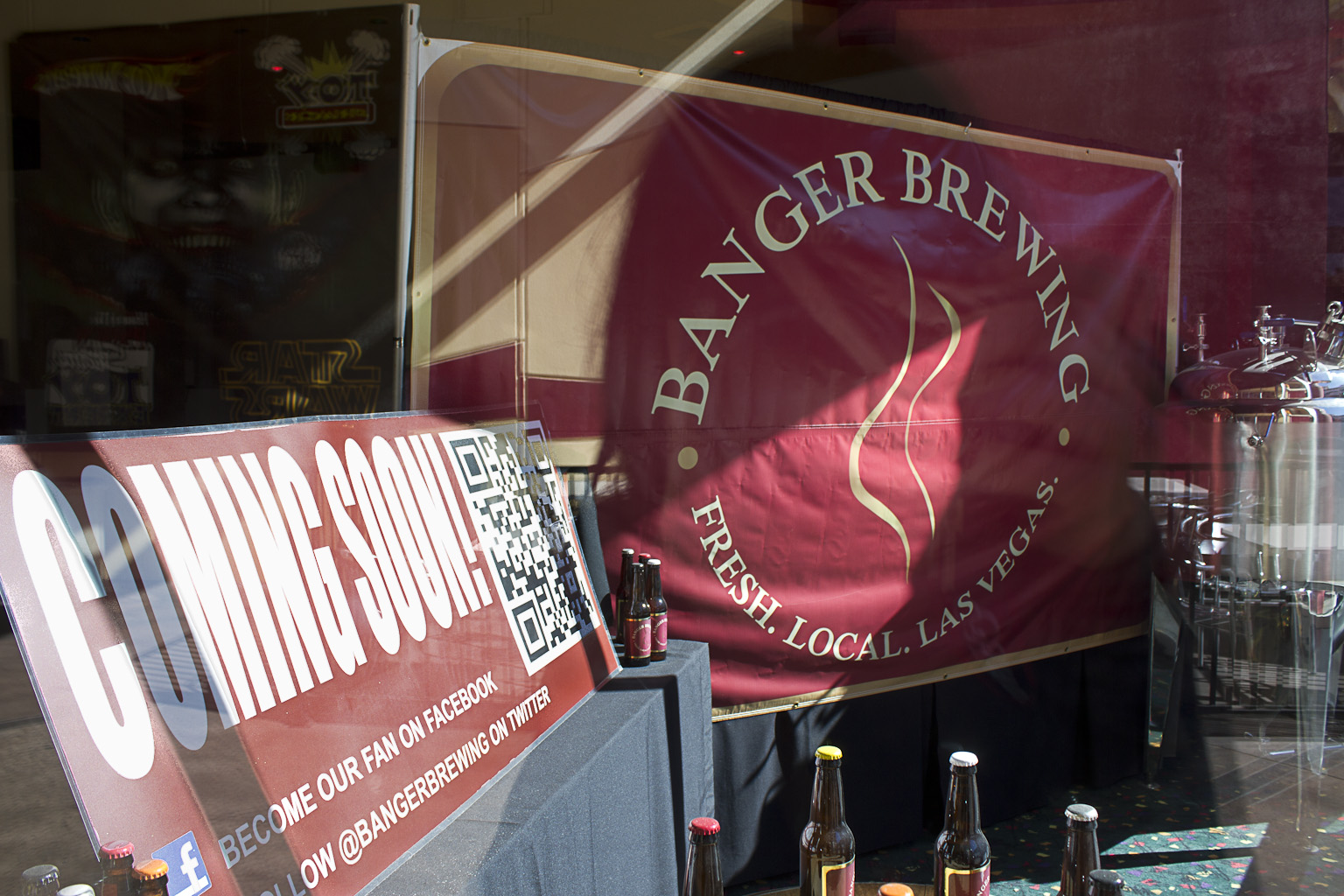 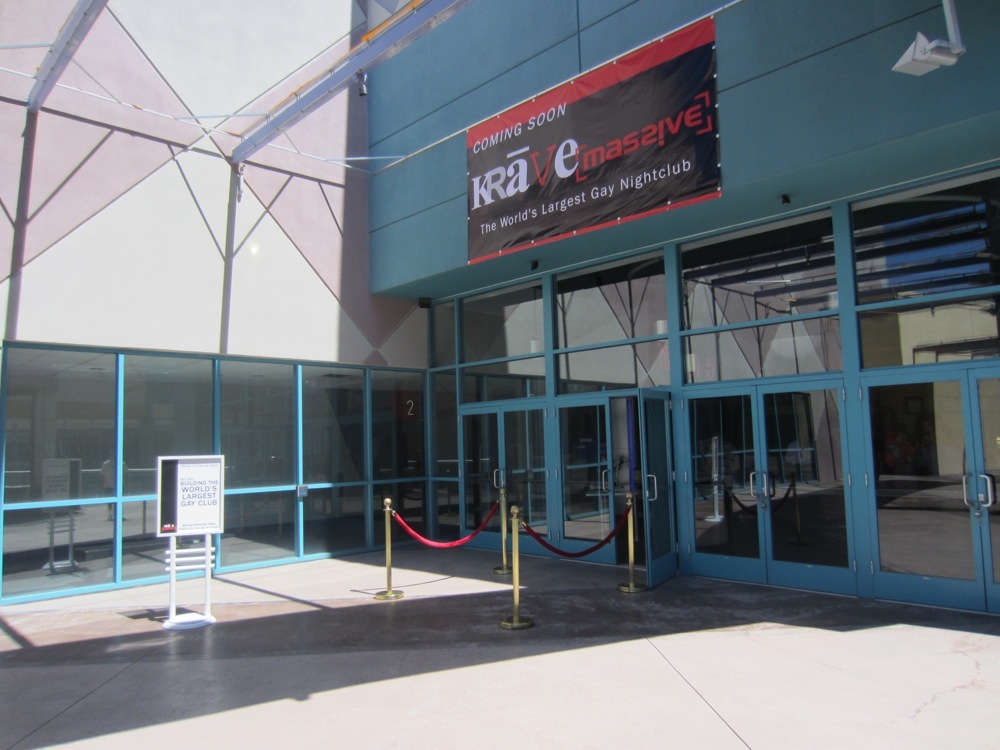 Krave Massive
Location: 450 Fremont St.
Krave Massive transplants the gay nightclub Krave to the third floor of Neonopolis. Five themed dance rooms — covering house, top 40, hip-hop, country and Latin music — will be created inside. A martini lounge, a members-only VIP lounge called Indulge Private Lounge, Tickled Pink comedy club, a performing arts theater, an LGBT movie theater, a retail store and a lesbians-only dance lounge are among the proposed venues within the club. There's even talk of a 20,000-square-foot pool being built in front of the club, complete with cabanas. The club originally planned to open for New Year's Eve, but now pegs a May 2013 opening. In the meantime, the club is in the Crown Theater at the Rio on Friday and Saturday nights.
Opening: May 2013
· All Coverage of Krave Massive [~ELV~]
[Photo: Susan Stapleton] 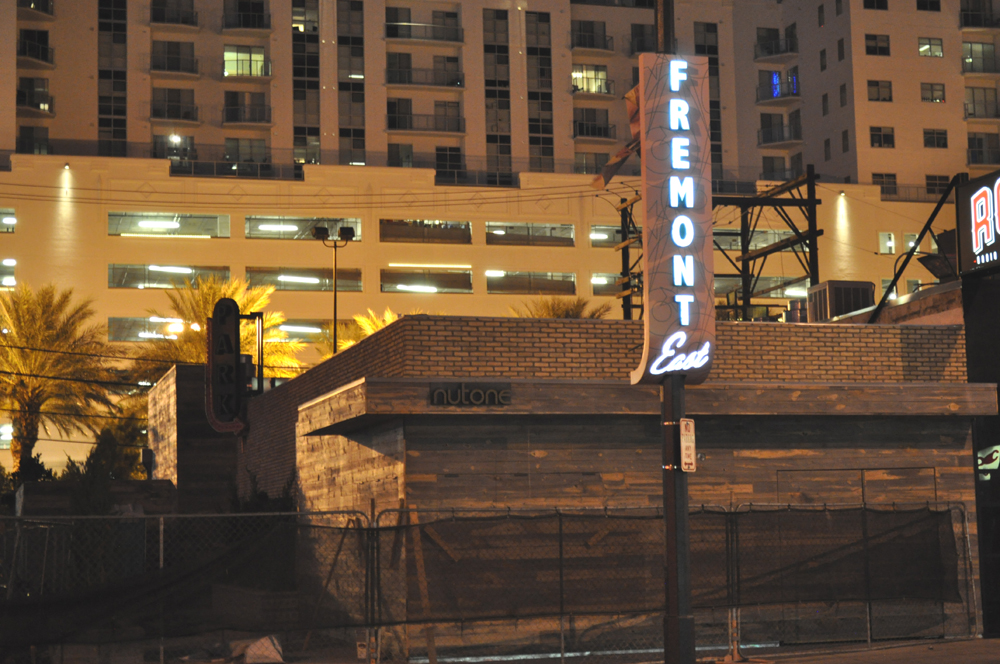 Park on Fremont
Location: 506 Fremont St.
Park takes over the former Maharaja Hookah Lounge space and plans to feature a bar, beer garden and restaurant. Look for custom cocktails, an impressive beer selection and gastropub fare. The name comes from the parklike setting that inspires the space. Expect to find shabby-chic furniture, antique-style lampposts and a communal table in the shade of live oaks and extensive trellising.
Opening: March 2013
· All Coverage of Park on Fremont [~ELV~]
[Photo: Bradley Martin] 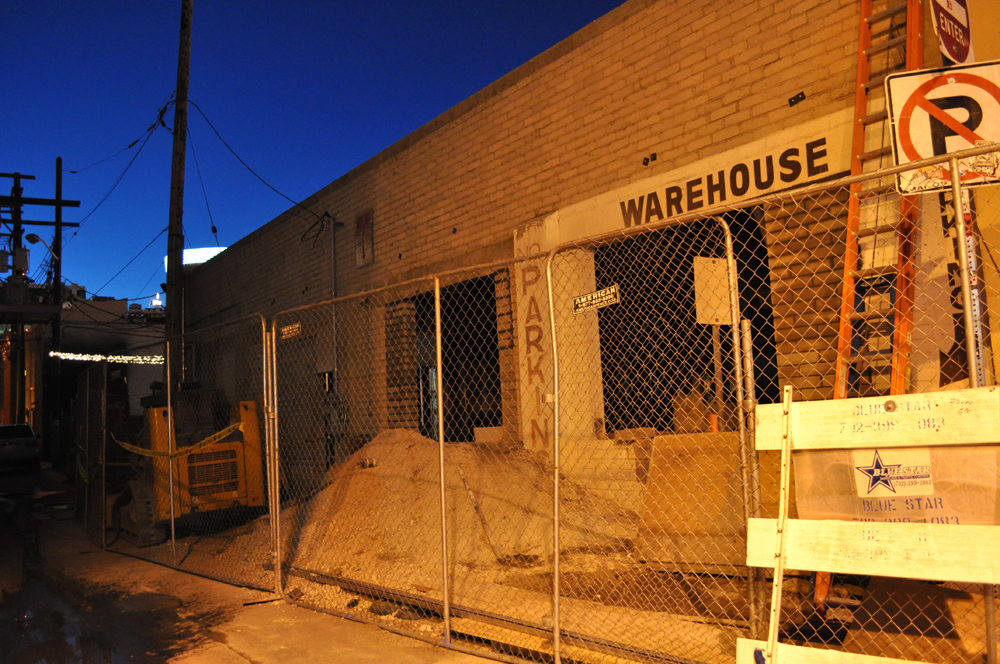 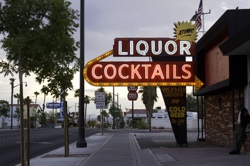 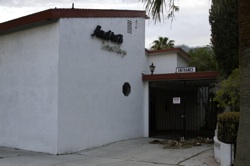 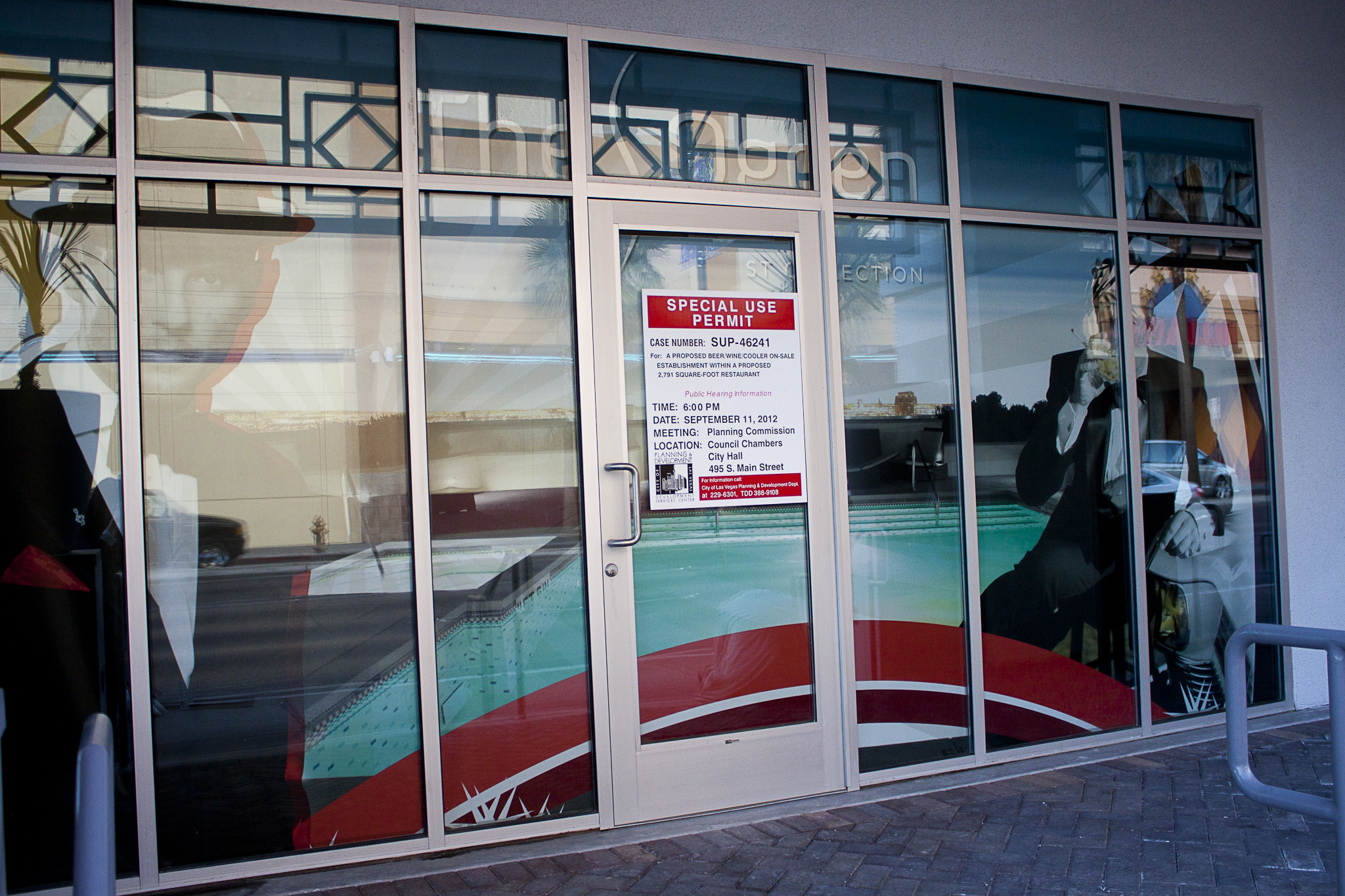 Slice A Perfect Food
Location: 150 Las Vegas Blvd. N.
Miki Agrawal from Manhattan is planning to open her healthy A Perfect Slice at the Ogden with a little help from Zappos head honcho Tony Hsieh. Expect healthy choices here along with Agrawal entertaining on the ukelele.
Opening: Summer 2013
· All Coverage of Slice A Perfect Food [~ELV~]
[Photo: Chelsea McManus] 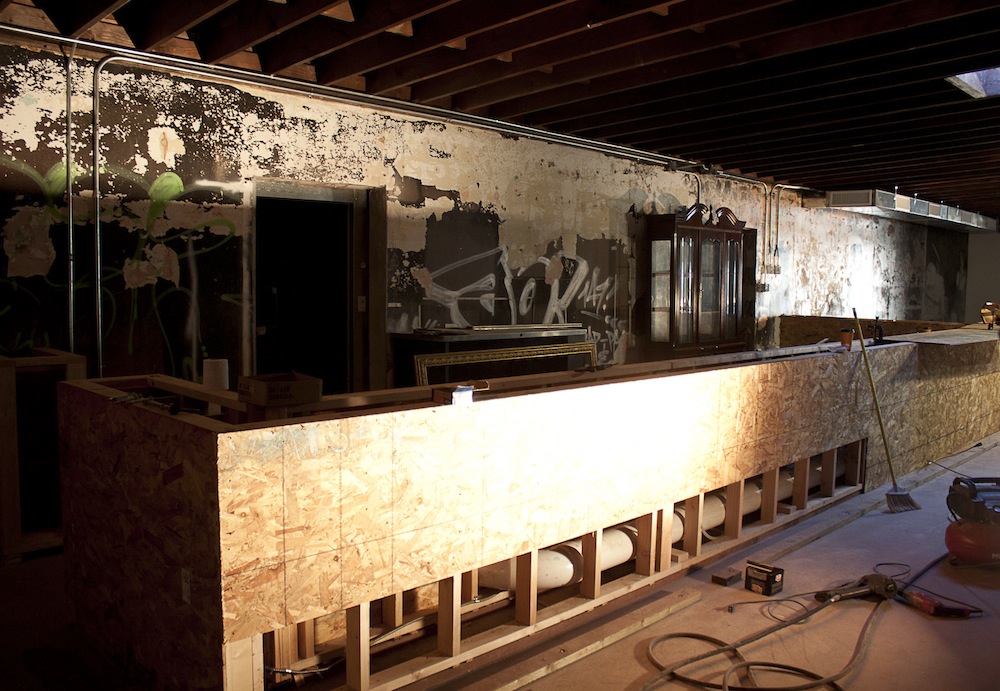 Velveteen Rabbit
Location: 1218 S. Main St.
The Velveteen Rabbit takes over a vacant space ravaged by fire. This lounge named for a children's book to leap onto the scene just in time for spring. Look for old timey cocktails and vintage and reclaimed pieces to decorate the space.
Opening: April 2013
· All Coverage of the Velveteen Rabbit [~ELV~]
[Photo: Chelsea McManus] 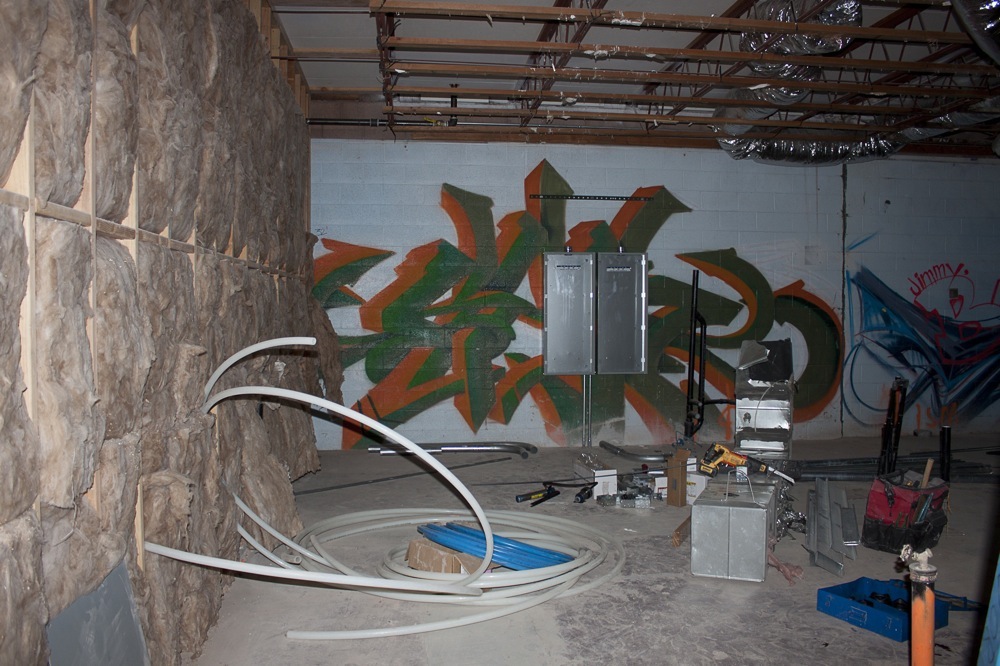 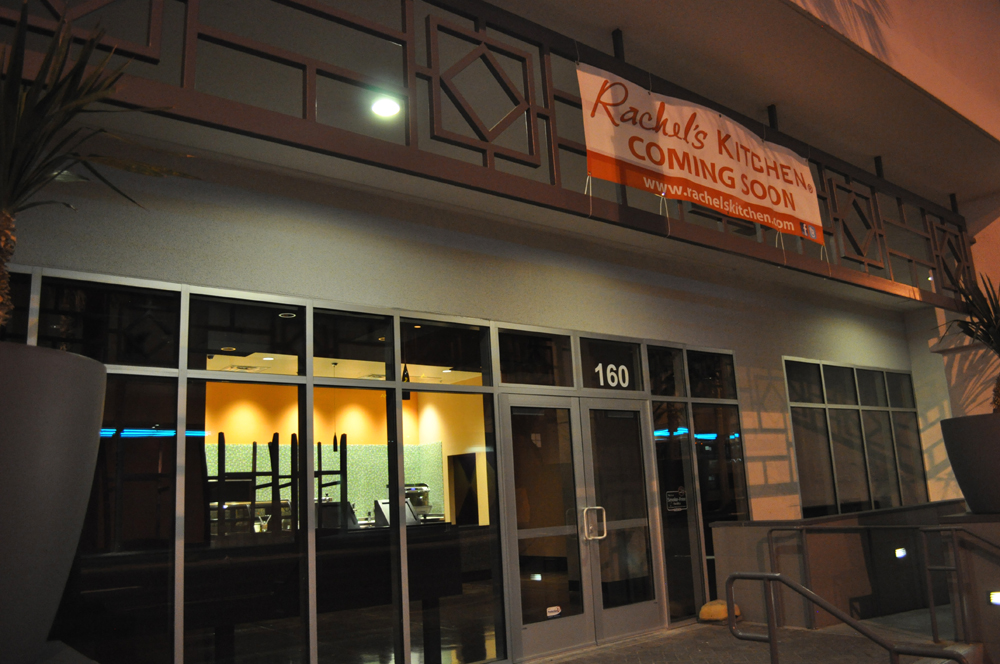 Rachel's Kitchen
Location: 150 Las Vegas Blvd. N.
The California-inspired Rachel's Kitchen continues its expansion with a new location inside The Ogden. The 2,791-square-foot, quick-serve restaurant will seat 71 people with room for outdoor seating under a covered area and even plans to serve alcohol.
Opening: Next week
· All Coverage of Rachel's Kitchen [~ELV~]
[Photo: Bradley Martin] 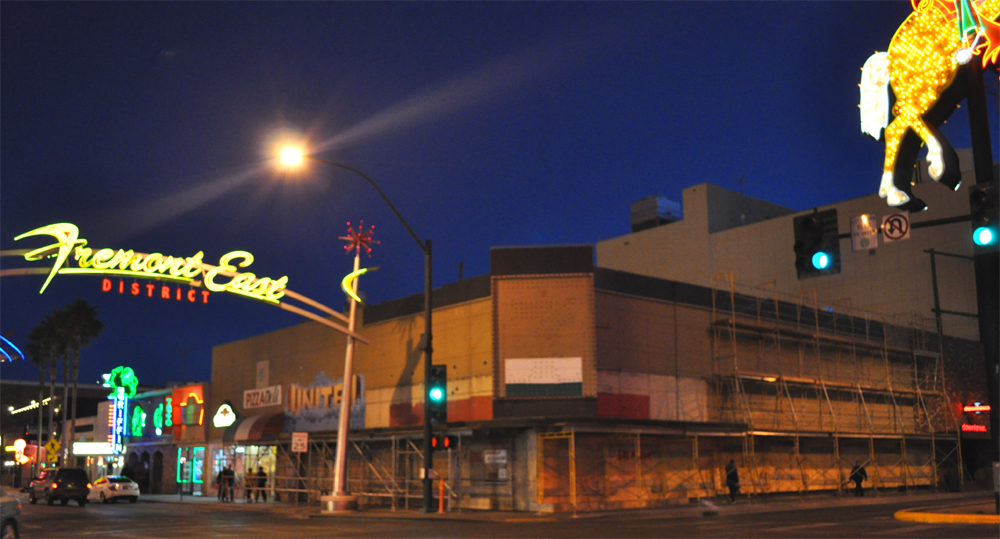 Inspire Theatre
Location: 501 Fremont St.
Tony Hsieh is converting the former 7-Eleven building at the corner of Fremont and Las Vegas Boulevard with the Inspire Theatre, which includes a 1,452-square-foot rooftop deck that wraps around the top of the building. A "secret passage to the roof" had been included in the initial proposal. A small, second floor "secret bar" and a 235-square-foot outdoor section for cocktails are all part of the plans.
Opening: Originally first quarter 2013
· All Coverage of Inspire Theatre [~ELV~]
[Photo: Bradley Martin] 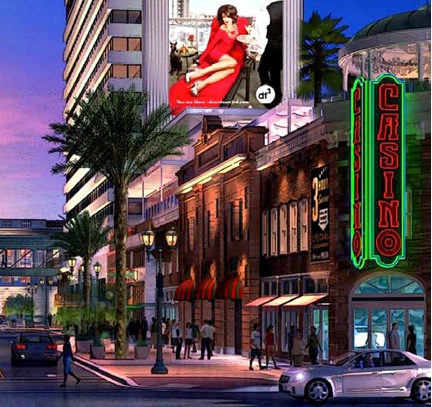 Downtown Grand
Location: 206 N. Third St.
The reopening of the Downtown Grand, formerly the Lady Luck, brings with it a bevy of new dining options. I Love Burgers, Pizza Rock and Daily Kitchen & Wellness Bar, all part of parent company Fifth Street Gaming and LEV Restaurant Group, plan to join the fray. Pizza Rock will be part of the construction, along with a revamped Mob Bar, Triple George and Hogs & Heifers. Inside the casino, look for Commissary on Downtown3rd and "Ultra Tavern" Little Macau. Other food options for the Downtown Grand include a Biergarten, NY Deli & Sports Book and the S+O Cafe, presumably named after surrounding streets Stewart and Ogden. Other options include the Pool Bar & Grill and bars and lounges dubbed Empire Room, Lobby Bar and Center Scene, a bar located in the middle of the gaming area. Kauai Shave Ice & Daiquiri Bar will feature a street-side pick up area while Gelato will be part of the fast food options.
Opening: Fall 2013
· All Coverage of Downtown Grand [~ELV~]
[Rendering: Fifth Street Gaming] 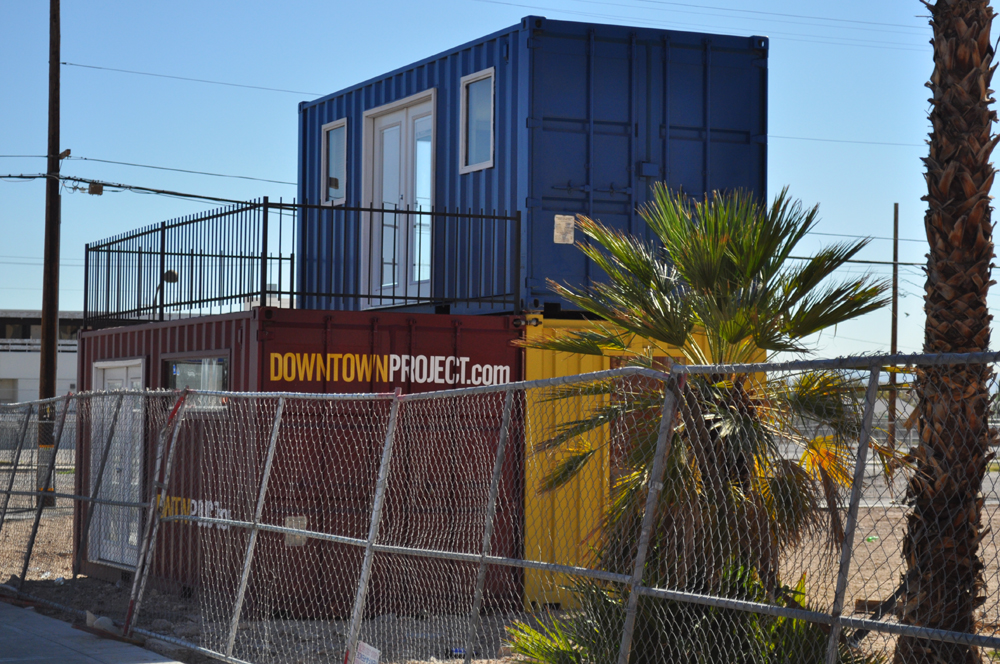 Container Park
Location: Fremont and Seventh
The land at Fremont and Seventh streets is tentatively planned to become a container park, an experimental development from Zappos honcho Tony Hsieh that houses businesses in shipping containers. Food concepts in the works in the shipping containers: barbecue, tacos and a wine bar and charcuterie spot.
Opening: Phase one opens in July
· All Coverage of Container Park [~ELV~]
[Photo: Bradley Martin] 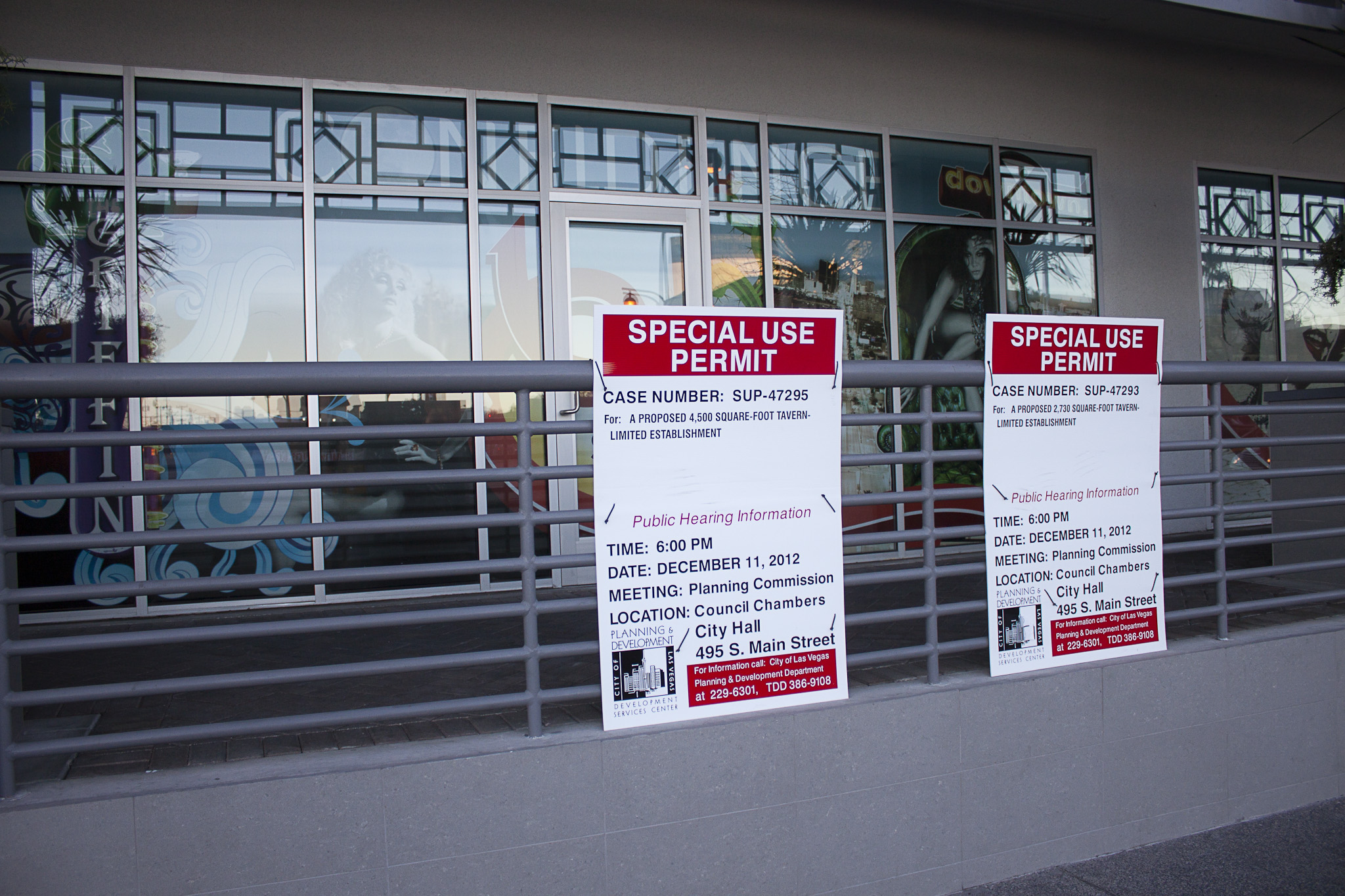 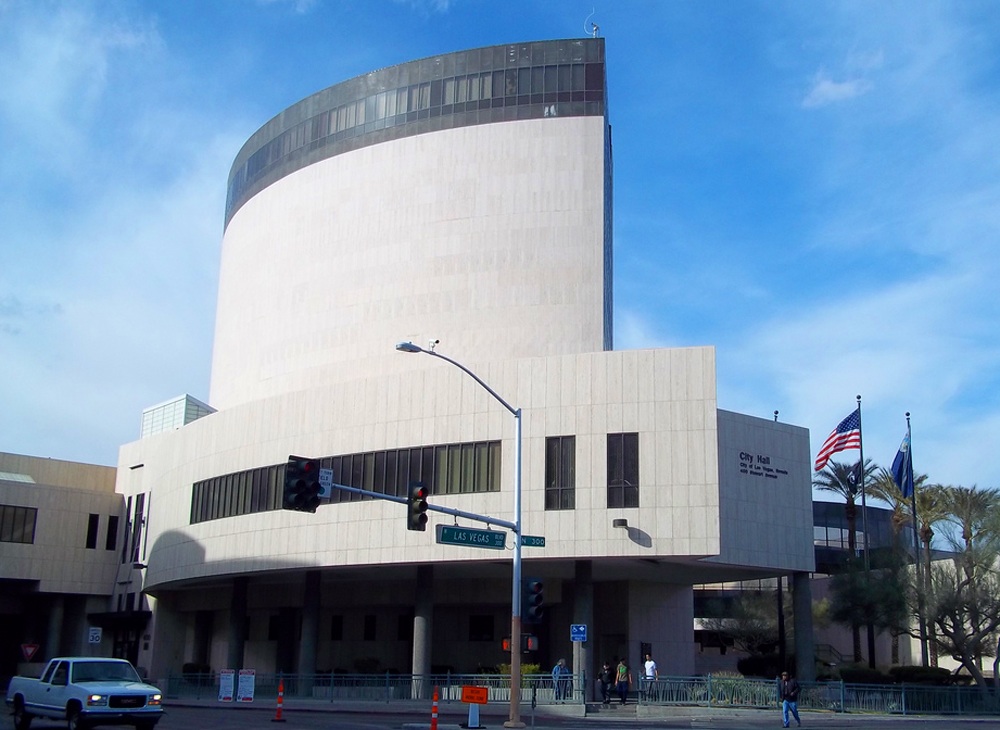 Zappos Bistro
Location: 400 Stewart Ave.
The most exclusive of Downtown restaurant projects will be created primarily for Zappos employees. A 13,509-square-foot sequel to their Henderson headquarter cafeteria, Zappos Bistro will be constructed inside the former Las Vegas City Hall library. The complex will be operational by October. Company honcho Tony Hsieh also plans to convert the old city jail into a bar.
Opening: October 2013
· All Coverage of Zappos [~ELV~]
[Photo: Downtown Project] 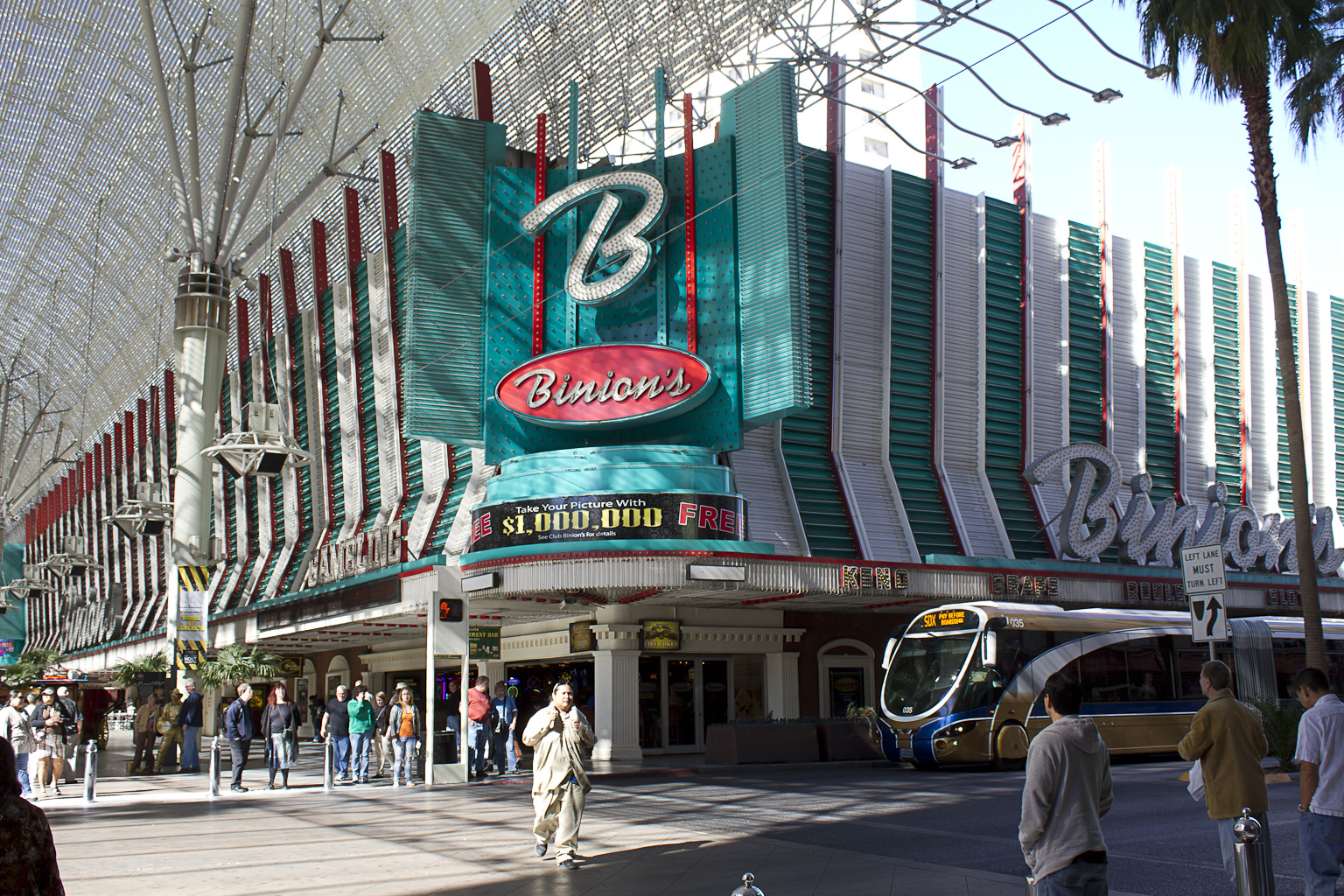 Binions
Location: 128 Fremont St.
La Velvet Margarita Cantina out of Hollywood is just one of the changes rumored to be going in Binions. The casino may shut down for an entire revamp as well.
Opening: Unknown
· All Coverage of Binions [~ELV~]
[Photo: Chelsea McManus]