Share All sharing options for: Kumi to Bring DJs, Sushi to Mandalay Bay Sans Akira Back 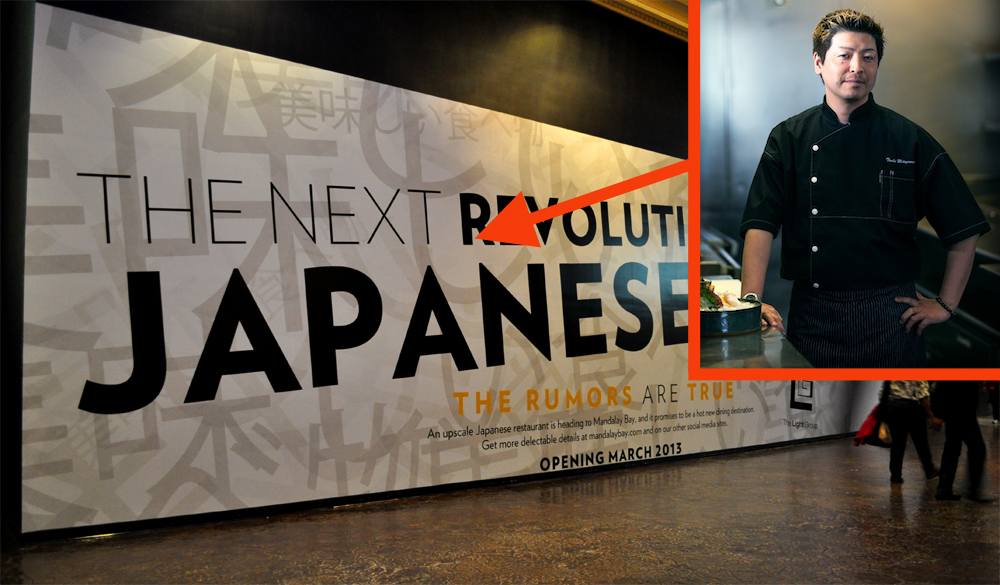 In a shock switcheroo, Akira Back will not be taking over the shuttered China Grill space at Mandalay Bay. Kumi Japanese Restaurant & Bar will fill that restaurant void, completing the trilogy of restaurants remodeled and revamped by The Light Group. Sushi chef Toshiyuki Motoyama will oversee the space, helming from an open, 87-square-foot sushi bar housed between two split dining rooms. Kumi had hoped to open in March, but a non-specified summer bow is now promised.

Plywood covering this space touts Kumi as "the next revolution in Japanese dining" that will be "upscale" and "promises to be a hot new dining destination." While official press releases announced Back would be the chef inside, the plywood outside never mentioned the Yellowtail mastermind by name. The Light Group took over the leases of China Grill, the adjoining Red, White and Blue, since remodeled as Citizens Kitchen & Bar and the newly refreshed Red Square, in late 2012.

Kumi will feature distinctive looks for each separate section of the venture. A bar will be the first visual draw with a 1,216-square-foot lounge, visually open to the resort's convention center promenade, beckoning with booths, chairs and room for 82. Decorated in Japanese symmetrical patterns with "shades of cobalt blue and white," this attention grabber will house beverages displayed "in traditional Japanese jewelry cases."

The central, circular 1,662-square-foot dining area has room for 111 including seven semi-circle booths. Behind, at the rear of Kumi, two long 18 seat tables are available for groups.

A second large dining room, closest to the pedestrian corridor, can accommodate 113 with a mixture of traditional tables and booths set against the entrance walls.

A deejay booth, operating an audio set-up created John Lyons Systems, will be located in this front dining room.

A private dining room, hidden behind the bar, features two long tables each with room for 14 guests. The Kumi menu intends to combine traditional presentations and flavors with Thai, Peruvian, Latin and other Asian influences.

Chef Motoyama's specialty is traditional edomae sushi technique. His previous work includes Stephen Starr's Makoto in Bal Harbour, Fla., and in 2012, he oversaw Umi Sushi & Sake Bar at the Delano South Beach. The Light Group's transformation of Mandalay Bay's THEhotel into The Delano is schedule to be finished in early 2014.