Share All sharing options for: SNHD Shuts Down Bar + Bistro with 47 Demerits, More

Bar + Bistro in the Arts Factory found itself back in the crosshairs of the Southern Nevada Health District. Inspectors shut down the restaurant on April 4 after a routine inspection discovered 47 demerits. 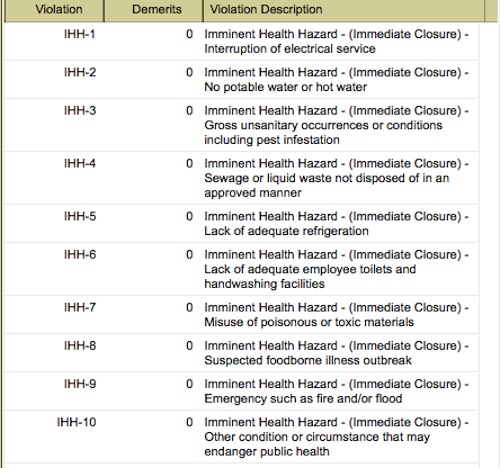 What's unclear is whether the restaurant really earned 10 citings for imminent health hazards covering everything from an interruption of electrical service, no potable water, gross unsanitary occurrences, lack of adequate refrigeration, a lack of employee toilets and hand washing facilities, a suspected food-borne illness outbreak, misuse of poisonous or toxic materials, an emergency such as a fire or flood and other conditions that could endanger public health.

What is clear is that inspectors found spoiled food, ineffective pest control measures, reused single use items and more among the demerits. Saturday on Facebook, Bar + Bistro wrote, "after a little plumbing issue yesterday that had us closed most of the day, we're glad to announce that food and drinks are again 'flowing freely' if you'll pardon the pun. join us won't you?"

This isn't the restaurant's first run-in with SNHD. The restaurant earned 40 demerits, one away from shutdown, during a routine inspection on Aug. 21. A re-inspection on Sept. 17 brought the place back up to an A with two demerits.

The Southern Nevada Health District routinely shuts down restaurants that receive more than 40 demerits. Restaurants have the option of requesting a re-inspection before the next scheduled inspection.