Megan Romano on the Future Plans for Chocolate & Spice

Share All sharing options for: Megan Romano on the Future Plans for Chocolate & Spice 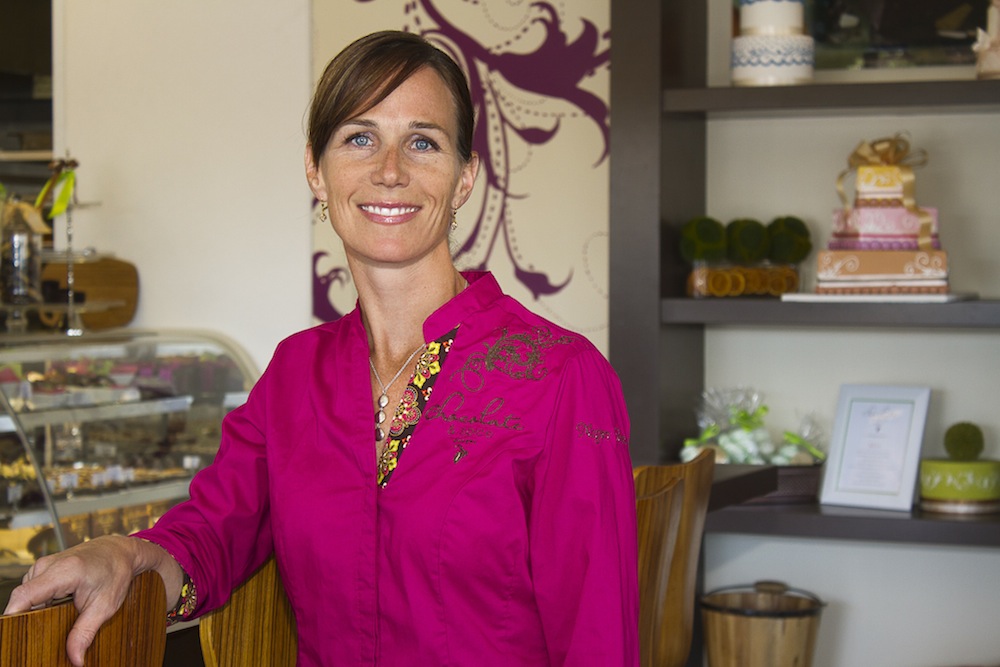 Celebrated pastry chef Megan Romano opened her Chocolate & Spice Bakery just a year ago to give the westside not only a taste of her artisan baked goods, bon bons, truffles dusted in cocoa powder, fruit sorbets and ice creams but to discover that she has a knack for the savory side of life as well. It would be a mistake to think of Chocolate & Spice as "just a bakery." Romano serves up breakfast items such as frittatas, golden raisin French toast and ham, cheese and egg croissants as well as soups, salads, sandwiches and pastas for lunch on an ever-changing menu board. Here, the alum of Charlie Palmer's Aureole at Mandalay Bay and in New York City as well as Charlie Trotter in Chicago talks about the first year of running her own bakery as well as expansion plans for the future.

How did Chocolate & Spice Bakery come together?
It's always been something my husband and I wanted to do. It's just a natural pull after training with someone else. We always worked with Charlie [Palmer] as an owner. One day we would move on and do something else. At Aureole, I was given a ton of freedom to create a brand, packaging, a line of chocolates. I would have everything lined up for when we made the move.

Oddly enough, in a crazy economy, it just felt right in a time when it could be questionable. It got off to a good start but we've been improvising along the way.

What changes did you have to make to the space?
It was deli. It had vanilla shelves and a corral system for people to wait in line. We had to pull that up. My husband is good about seeing a diamond in the rough. We moved a single wall for more dry storage. We started with the kitchen.

We added kiosks so we could expand. We did invest in a big revolving oven for $22,000, which was hard to sign off on. In Aureole New York, I was used to working in small spaces.

We kept the flooring. We had to piece it together in the front. We took out some of the paneling and used it in other areas of the space. One friend did all the painting for me. We had some creative input in the front just to pull it together.

I think a lot of the food photos just tying everything in. One of our first customers said she felt like she was in our home. The chairs are comfortable.

What did you learn in the past year?
I learned a lot of business. We learned that a business license has to be renewed twice a year. We were doing an event at the Martin and they needed a copy of our business license. The day before New Year's Eve I was in the city building downtown renewing my license.

I learned a lot of accounting. I have a bookkeeper and accountant, but I take on most of the day to day.

We listen to our customers and what they want. In this economy, we don't say no to a lot. We've got a pretty good wholesale going with some places in Tivoli Village and downtown, and we have a big account with a restaurant coming on the Strip. Daily deliveries going out the door. So I think a lot of it is being not so set in your vision that you can't not listen to what people are looking for.

A lot of bakeries do depend on wholesale just to stay in the black.
Just do the math — 500 croissants, 500 donuts. Not all of them do it. Successful ones do.

We've also been doing more beyond wholesale, acting as a consulting pastry chef in many ways. A lot of places don't have a dedicated pastry staff. They're welcoming ideas on how to streamline it, things that look good and make it easy on your staff. It's about being an asset to them helping them to get a pastry menu that tastes good and looks good.

How is running a restaurant off-Strip different than on the Strip?
It is. I learned a lot from the Strip. A lot of the decisions were made a lot more slowly. Do we want to close for Fourth of July? We just put a sign up and do it.

We can try things out here and suggest them to our wholesale accounts. We have a semi-open kitchen so we do get a lot of feedback from our customers. They're smelling things being cooked.

It's nice to see the results so quickly. We can create procedures between a few people, which is nice.

What was the menu testing process like?
The cookbook was a good way to compile a lot of my favorite things. It's not this intense process where we make changes. We just throw a menu up and we're more spontaneous changes.

A number of the people here have worked together for a while now. Every day is ongoing. It's of the moment. In the casinos, recipe packets had to be made and everyone had to be trained when we introduced a new item. Now you make what you like to eat.

I think people have been pleasantly surprised that we have lunch items and healthy items. I think they've been happy with good, clean flavors.

We're still learning from the Strip, too. Customer service is equally important to the food industry. We're super friendly and knowledgable with what we're offering.

Six months in, what changed?
I don't know about change. You get through that first year. Now we're in the beginning of the second year and we're ready with things like the holiday gift packages. It was hard to get everything lined up in advance. Some holidays I thought would be bigger than they were.

For example, we had an Italian Easter bread. A few of our customers remember that from their neighborhood.

I think we just got things more streamlined. The nice thing about the wholesale, people were just coming to us and we could put the accounts together.

That's where we are this summer, getting our gameplan together.

Does it seem like it's been a year?
Yes, it seems like it's been a year. I think we packed a lot in this year. It flew by. The spring tends to go quickly, then the school year is over. It went through in blocks of time. You picked your head up and the holidays were over, the charitable season was over.

What's the must-order dish of the moment?
We just put one some lemon-herb chicken skewers on the menu that are super summery. Keris [Kuwana] makes a really good shrimp fried rice. We did a chocolate chip cookie blondie with ganache that come together in one bar. We were playing around with a dessert for a restaurant. The grapefruit sorbet made with ruby red grapefruit is great. I love the white chocolate caramelized pecan cookies.

What's in store for the future?
We're working on our catering. It's a great alternative to the Strip dinner. We catered one party and one person referred the next party and it kept going from there. Those are just very nice and fun to do for us and a good value to the customer. It's easy for us to do better than the Strip on pricing.

We can cater just about anything. It could be a birthday party, bachelorette party, wedding brunch, Tasting menus so manageable for us.

We're working on the wedding market and occasion cakes. And we're doing a social dinner [last] night. A good friend in and said he could cook. He works for my husband over at the Rio. One day he said he could cook. We picked a date. It should be fun. Super casual. It's a bring your own beverage at a great price point, something that will attract different types of people.

Any plans for expansion?
Yes, that's always been the smart thing to do. It's a part of the actual design of this place so the first spot could supply the others. I think it's just a matter of a lot of things brought to our attention.

The Downtown Project interests me. We're heavily involved in Life Is Beautiful. Henderson, we might even cross over there.
· All Coverage of Chocolate & Spice Bakery [~ELV~]
· All Coverage of One Year In [~ELV~]