Devin Hashimoto on the First Year at Mizumi

Share All sharing options for: Devin Hashimoto on the First Year at Mizumi 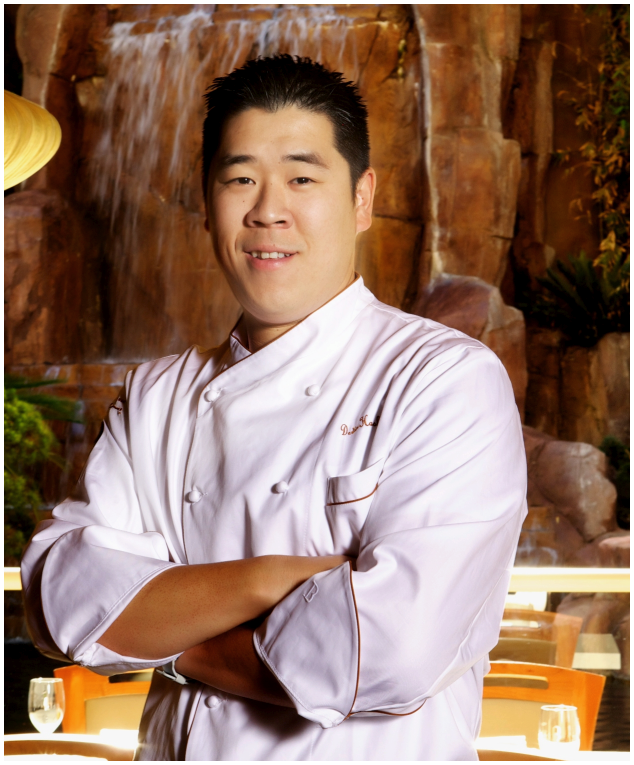 The sumptuous Mizumi with its view of the waterfall and koi pond at Wynn Las Vegas made its debut a year ago, bringing timeless Japanese design motifs and the complementing fare from Devin Hashimoto. Fans of kaiseki found an array of classic entrées, sushi and sashimi, robatayaki selections prepared over authentic Japanese charcoal grills and teppanyaki dishes. The space, the former home of Okada, underwent a quick design transformation that brought traditional Noh theater masks, embroidered obi sashes, hand-painted fans and other iconic Japanese design themes as decorating touches with a modern edge from Roger Thomas, executive vice president of Wynn Design and Development. Most dramatic, floor-to-ceiling windows in the main dining room opened up the view to the waterfalls and tranquil Japanese gardens. Here, Hashimoto talks about the first year of this high-end Japanese restaurant.

How did Mizumi come together?
I think concept stayed true to what it was in the past with more of a modern interpretation of modern Japanese cuisine. The patio seating is definitely something they rave about. We open the panels and you can see more of the waterfall.

We've had great press. The private dining room is still doing a really good job even though that was a concern that we wouldn't have the space we had in the past. On the pagoda, more guests an opportunity to dine there.

Were you given any direction in terms of the food?
I wasn't told to do anything in regards to the concept. I felt personally with the changes, especially for our repeat guests, I think it was put on myself that I had to deliver something wow, really good. We have traditional sushi, teppanyaki, robato and keeping with traditional dishes. The dobin soup is very traditional. We have classical dishes like black cod and more of the quintessential American-Japanese dishes to cater to the guests who just want the basics. The omakase is now listed on there so guest know they can have something a little more adventurous.

Nothing was said to me as far as this is where you go for concept and the cuisine. It was more of a "make it happen" directive.

What changes did you have to make to the space?
Everything. We got rid of all the banquettes. We did put in those four booths. We lost two of our private dining rooms to increase main dining room seating. By removing those black beams that looked like chopsticks, we opened up the dining room.

There used to be a little wall that curved in and a banquette there with only one gap here to get through.

What did you learn?
I think the biggest thing is definitely to deliver what is expected of you at this level. Knowing the fact that when we were opening, we picked out the menus, we picked out the china. I realized this is pretty huge to spend this kind of money on this. The pressure hit me all at once, this is big and it's in my hands to make it work. At the big party when everything was done and [my bosses] told me I did a great job, that's when I felt like the weight was lifted off.

The biggest challenge moving forward is to maintain the standards and the accolades we received.

This was a big learning experience. I never had a chance to pick out the china, having to deal with the staff and getting them to buy into this new change. We're trying to be the best Japanese restaurant on the Strip. We're a whole new restaurant. Okada is in the past. This is our era to start out fresh. For the most part, they did all buy into it.

What was the menu testing process like?
It wasn't as hard as I anticipated it to be. Conceptually, yes, the tasting with my bosses, no. The challenge was getting it on paper. I start with the seasoning for this, then the vegetables. The proteins, I know what I want to use. By the time it gets to my boss, it's good.

I just finished the summer menu. It's in the approval process now.

You have one of the few restaurants on the Strip that offers Korean influences on the menu. How has that gone over with guests?
I've gotten to know our Korean host really well. They like the kimchi, but it's not on the menu. I know the clientele is there. My wife is Korean. The flavors are very good.

This past weekend, the Korean host said all his clients ask for Soju on the menu. "They keep asking me and finally I wanted to tell you to consider putting on the wine list. My clients will order two or three bottles." It's something easy to put on the menu.

Korean food has a lot of small dishes all thrown at you on the table, and there's no way you can make it gourmet; it's family style. But there are so many components that you can add as garnishes and accents to a plate, like shiso seeds to soup for a floral flavor.

Six months in, what changed?
We were busy with convention season in September and October. November was a little slow. with Thanksgiving. Overall I think front and the back got a good grasp of the restaurant. The servers were accustomed with the menu.

When we opened Mizumi, I had two sushi bars with two ticketing systems. That was a big challenge with different printers coming from different bars. By six months in, we had a good flow and menu knowledge. A good 40 percent of the menu changed, but they had a lot of time to study. We were a well-oiled machine by that time.

Does it seem like it's been a year?
No, it went by super fast. It just seemed like son went to first grade. We took him to day one. Now he's going into second grade. Where did the year go? 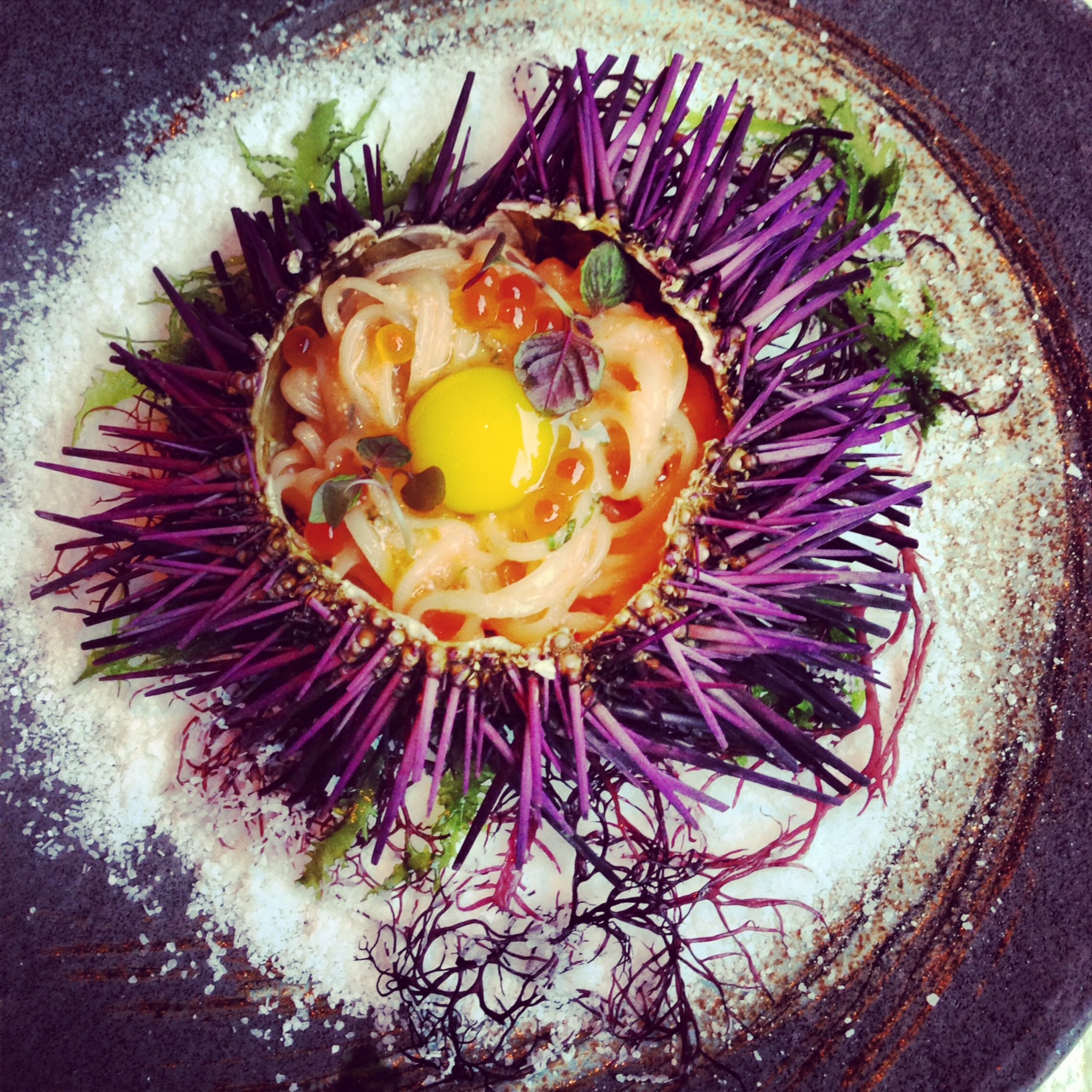 What's the must-order dish of the moment?
The mentaiko spaghetti is served in a sea urchin shell with a spicy pollack fish egg and pasta made with a special thin udon noodle.

The duck confit ishiyaki bibimbap is taking off. That dish is doing really well.

What's in store for the future?
The summer menu is coming out soon.

I have to be on my game and step up to the bar with SLS coming to town, Morimoto coming to the Mirage, Akira Back with Kumi at Mandalay Bay. Hakkasan opened up. For Asian restaurants, there's a lot of competition. What do we have that's special and unique? I don't want us to be that kind of restaurant. I want people to see the changes every season. This is true fine dining Japanese.
· All Coverage of Mizumi [~ELV~]
· All Coverage of One Year In [~ELV~]
Devin Hashimoto and the Mentaiko spaghetti [Photo: Wynn Las Vegas]