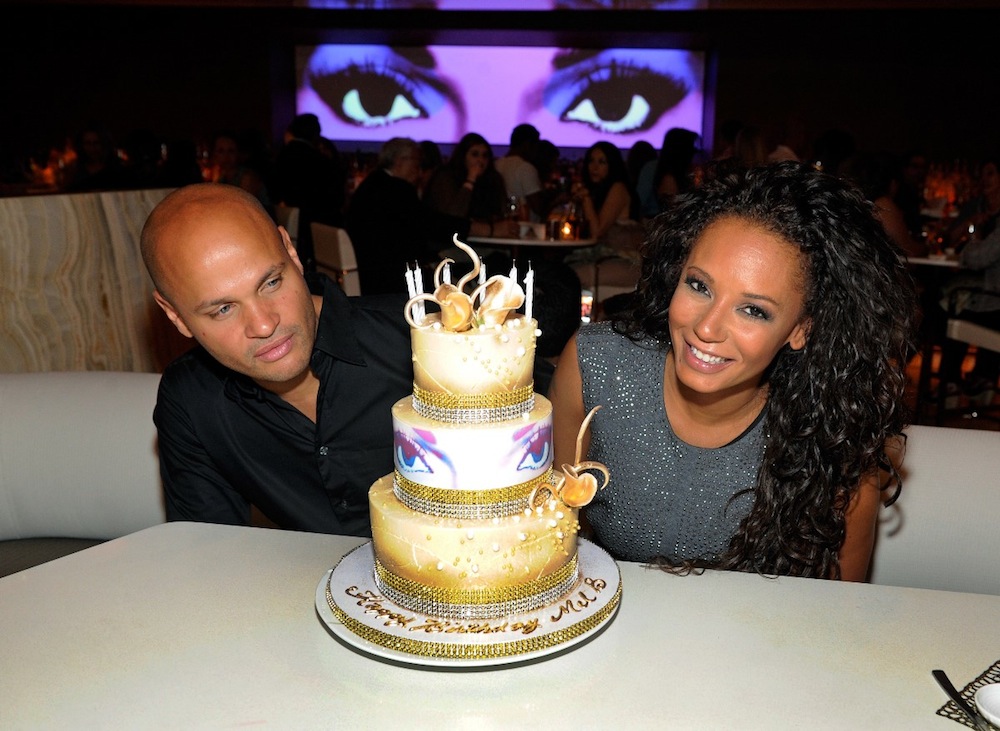 Stephen Belafonte and Mel B at Andrea's [Photo: David Becker/WireImage]

Actor Eric Roberts and his wife dined at Rao's at Caesars Palace for lunch on Sunday. They ordered a house salad, spaghetti marinara and chicken pesto pizza. [EaterWire]

Comedian Joan Rivers dined on the terrace at Lavo at the Palazzo on Saturday night after her show at the Venetian. Overlooking the Las Vegas Strip, the Fashion Police host was joined by friends and ordered crispy calamari, the Kobe meatball, spinach and artichoke pizza as well as dessert. [EaterWire]

Mario Lopez and his pregnant wife Courtney Mazza Lopez lunched with another couple on Saturday at Society Café in Encore Las Vegas. Lopez and the mama-to-be shared donut bites, chocolate cake and the ice cream sandwiches with the table for dessert. [EaterWire]

Actor Jason Statham ate lunch with a party of six at Wolfgang Puck Bar & Grill at the MGM Grand on Saturday. They had a couple of drinks and light lunch. Former American Idol judge Randy Jackson also was spotted with five people ordering appetizers and sandwiches. [EaterWire]

Comedian Wayne Brady dined at Stack at the Mirage before his show on Saturday night. [EaterWire]

Professional basketball player Metta World Peace, formerly known as Ron Artest, stopped in at Culinary Dropout at the Hard Rock Hotel for a round of Moscow Mules with friends on Saturday. [EaterWire]

Comedian Joan Rivers was spotted eating an early dinner on the patio of Postrio Bar & Grill by Wolfgang Puck at the Grand Canal Shoppes at the Venetian before her show on Friday night in the Sands Showroom. She dined on Hong Kong Style Scottish Salmon with a glass of Pinot Grigio. Also spotted at Postrio on Friday, comedian Jenny McCarthy having dinner with her son. She ordered a turkey sandwich with onion marmalade and shared some of her son's spaghetti and meatballs. [EaterWire]

Michael Phelps, again, was spotted having lunch at Heraea at the Palms with Golf Channel reporter Win McMurry on Saturday. NBA player Paul Pierce dined at Heraea on Friday. He ordered a Cobb salad for lunch. Deejay Afrojack was spotted at Heraea on Tuesday night for the restaurant's Industry Hangover Relief Party. [EaterWire]
· All Coverage of Star Watch [~ELV~]