Aria's Cocktails Are Getting a Craig Schoettler Makeover

Share All sharing options for: Aria's Cocktails Are Getting a Craig Schoettler Makeover 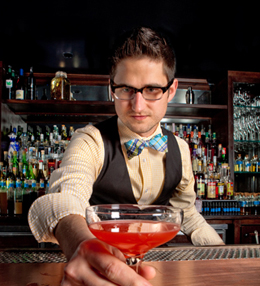 Memorize the name Craig Schoettler, people, because the 26-year-old former executive chef of Chicago's cocktail lab the Aviary from chef Grant Achatz and Nick Kokonas is headed to Vegas. The man with "an encyclopedic knowledge of classic cocktails and how to tweak them" is becoming the new property mixologist at Aria.

Schoettler left Aviary last June and later became the beverage director at Merin Hotels and specifically the rooftop Drumbar, where he brought over some of the nifty bartending tools he commanded — a liquid nitrogen tank, an immersion circulator and vac-pots. He developed an ice program. He redid the entire cocktail program with thoughtful drinks such as "grower Champagnes, cordials, rare bottlings from the members-only Scotch Malt Whisky Society international microbrews and esoteric wines." He even created a snack menu to go with the cocktail program.

And now he's headed to Vegas, perhaps to shake up the cocktail scene at Aria. Get to know him through this Q&A with Esquire that dropped yesterday. And stay tuned.
· All Coverage of Craig Schoettler [~ECHI~]
Craig Schoettler [Photo: Christian Seel]