Share All sharing options for: Elton John's Hubby Brings the Bubbly to Caesars

Looks like singer Elton John plans to keep his residency going longer at Caesars Palace. His partner David Furnish plans to open the bubblelicious Fizz Lounge inside the former Bernini clothing store on the casino floor. 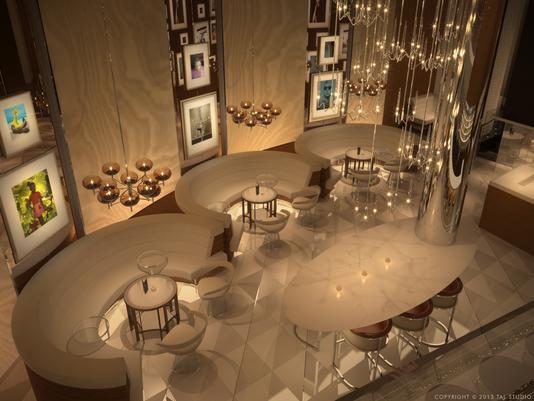 The 2,750-square-foot space has a declared construction budget of  $3.2 million with a potential occupancy of 190 champagne-sipping guests. It sits steps from the Colosseum Boutique, which hawks Elton John show souvenirs. Sir Elton is scheduled to resume his Vegas residency at the Colosseum on Sept. 18.

Steven Kennedy and Michael Greco, who handled projects at the Palms and Pure Management, are Furnish's partner on the project. "The space will open in the fall and will house pieces from Furnish and John's extensive private art collection," the New York Post reports.

The Bernini store was evicted from the premises earlier this year after not paying its $60,000 per month lease for more than 400 days.

Fizz Lounge isn't the only new bar going into Caesars Palace. Fountain Bar, in front of Rao's, Bacchanal Buffet and Payard, is already under construction and word has it that the 24-hour Galleria Bar will undergo a facelift and serve up a mixology program.
· Furnished with Bubbly [NYP]
· Peering at Caesars Palace Million Dollar Fountain Bar [~ELV~]