Share All sharing options for: UPDATED: Proof Positive Giada's Will Open in 2014

Whoever is running the Gansevoort Website is probably in a heap of trouble after this. Apparently the site inadvertently posted a page showing Giada De Laurentiis and touting the early 2014 opening of her first restaurant, Giada's.

Go ahead. Go to the Gansevoort page and click view source [Photo: Gansevoort]

Permanent Los Angeles resident James Charles Morogiello, aka Chuckmonster on the blog forum VegasTripping, again gets a tip from a reader, who sent along a screenshot of the page and the text.

De Laurentiis cultivated her staple Italian cuisine in the kitchen of her grandfather's restaurant and later commenced her culinary career at the prestigious Le Cordon Bleu in Paris. Since her debut in 2002, De Laurentiis has become one of the Food Network's most recognizable faces, starring in four primetime TV shows, "Everyday Italian," "Giada's Weekend Getaways," "Giada in Paradise: Capri, Santorini, Monaco and Thailand," and the highly popular series, "Food Network Star." She is also a correspondent on NBC's Today, where she highlights current trends in travel, cuisine and lifestyle. De Laurentiis is also the author of six cookbooks, five that have charted on the New York Times best-seller list. Her culinary empire continues to expand with the opening of her first restaurant at Gansevoort Las Vegas, slated to open in early 2014. 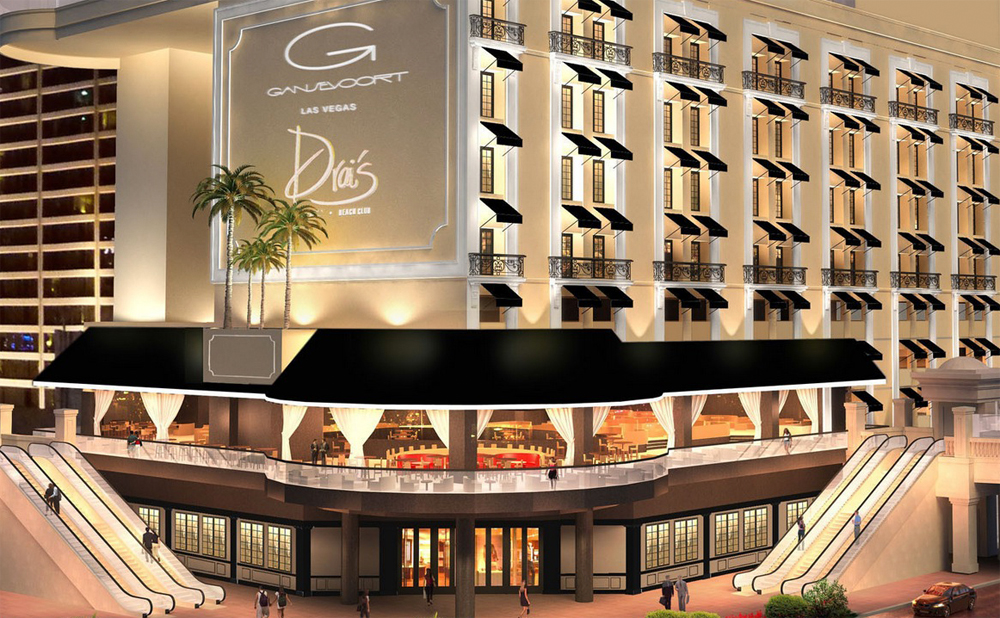 Here's what Eater Vegas knows about the space that may become Giada's. The 12,863-square-foot restaurant will be located on the second floor featuring Strip views. Originally, the restaurant was slated to take up 27,836 square feet. Current plans only call for one restaurant at the Gansevoort. Note, Nobu Restaurant & Lounge at Caesars Palace clocks in at 12,750 square feet.

An added attraction to the second floor, a balcony with a glass railing will cantilever over the Strip sidewalk.

The pool and nightclub from Victor Drai will occupy the 10th and 11th floors.

UPDATED: A tipster says Giada's will have 300 seats; 150 in the dining room, 100 in the bar and lounge area plus additional space at a chef's table and private dining room. Despite public records that show the restaurant at 12,863 square feet, our tipster says it will be 11,500 square feet when it's all said and done.
· Gansevoort Accidentally Announces Giada's Restaurant [VT]
· Could Giada De Laurentiis Open Her First Restaurant in Vegas? [~ELV~]
· All Gansevoort Coverage [~ELV~]

Everything You Need To Know About Giada