How Bacchanal Buffet Served Up 1 Million in Its First Year

Share All sharing options for: How Bacchanal Buffet Served Up 1 Million in Its First Year 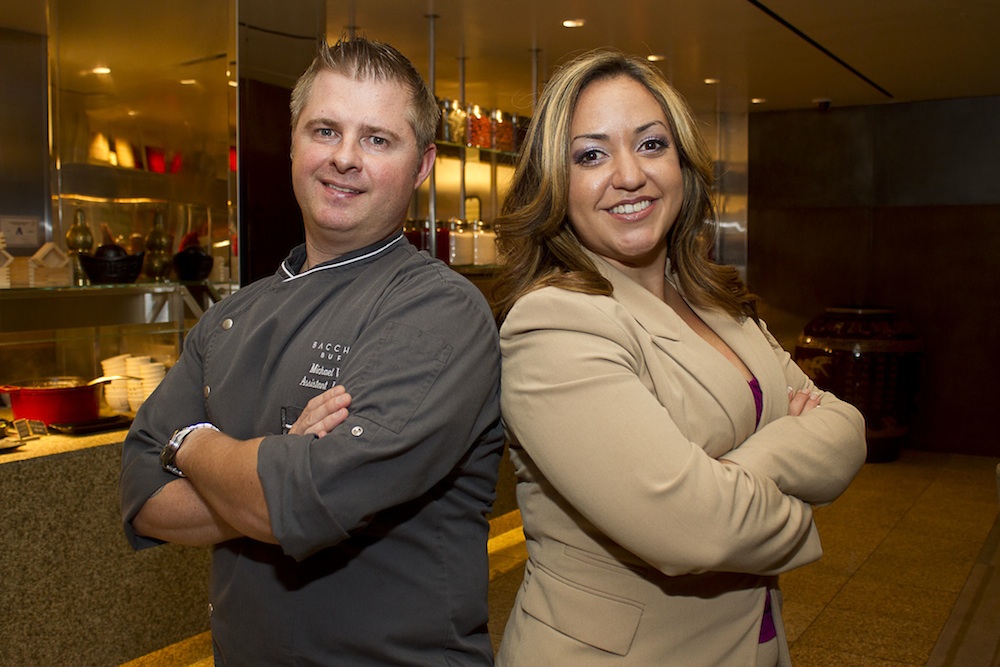 How many restaurants out there handle 3,000 to 3,500 covers on a daily basis? Well, Bacchanal Buffet at Caesars Palace for one. The $17 million buffet that opened last year celebrates its first birthday by serving its 1 millionth customer earlier this month. The nine restaurants under one roof also have been introducing five new items that will find a new permanent home on the menu every Monday. Look for lamb tagine with curry aioli and cous cous, green curry seabass, Provençale chicken with artichokes and wild rice, pork and chicken adobo and herb-crusted skirt steak now on the buffet. That's in addition to the 500 items already served up daily. Here now, general manager Gabrielle Perez and executive chef Michael van Staden talk about the first year of the buffet that changed the way people think about buffets.

How did Bacchanal Buffet come together?
Gabrielle Perez: From my perspective, it was the big bang. Slow, slow, slow and then bang, quickly at the last minute.

Michael van Staden: We wanted to open up a buffet that is not your average buffet but also for the foodie. A lot of people these days have their own blogs and are foodies for that matter.

GP: We really do try to think of it as nine restaurants under one roof.

Were you given any direction in terms of the food?
MVS: We started off with the food the people are familiar with and giving it a little twist and also working on new dishes, especially with our one-year anniversary. We've been hearing out the guests and what they wanted to have. They want more authentic dishes. Our biggest clientele is Asians from 18 to 36.

GP: Some of the stations were designed for the type of food we have there. The Italian station has pizza wood-fired grill. The American station is designed with that carving table with a steam table under to keep food moist. The smoker back there works 24 hours a day. We smoke overnight and bring it out the next day.

What changes did you have to make to the space?
GP: Well, it was a $17 million design.

MVS: The difference about this buffet over others is everything is happening in front of you. Here a lot of stuff gets finished off on the stations. We obviously do everything from scratch.

GP: Which I love.

What did you learn?
MVS: You always have trial and error with everything. What we've learned is that people are willing to try something new and it can go on the buffet. We all have a fine dining background. We push the envelope a little. I think people are becoming adventurous at the buffet. In the old days, you would always see the same stuff. We have braised chicken feet.

GP: The chicken feet are prime example of that

MVS: We had braised rabbit for Easter. We get the chance to put stuff on the menu that we like to eat as well.

GP: I think it challenged everyone's perception of a buffet. Of course, you can find prime rib and crab legs. But you can also find braised chicken feet and sushi rolls and lamb chops.

MVS: We also do artisanal sausage as well.

GP: For the charcuterie we buy them out. They have nothing left for me to buy.

MVS: I'm in contact with places like Mikuni Wild Harvest for artisanal food. We have wild boar salami. You'll see that in fine dining places like Michael Mina or Comme Ça. We do get a lot of local ingredients as well.

What was the menu testing process like?
GP: Thursdays at 2 p.m. we would taste food.

MVS: It was a very long process. Every time we did a tasting we did it station by station. You put stuff on the menu and rethink and go back and think, "We can make it like this, but let's give it our own twist." I think that's how the tasting went about. You put the classics on the menu but then revamp them. We're never done here. The good thing about a buffet is there are always specials. We might have miso-glazed scallops this week but lobster Benedicts next week.

MVS: I have a lot of chef friends in town. We had Guy Savoy eating breakfast in here for two weeks. We saw Michelin-starred chefs who don't normally come in to a buffet. I know these chefs personally, they wouldn't come to a buffet.

Six months in, what changed?
MVS: When you open up a buffet for the first time, you put your classics on there. We realized people are looking for something different. Now we have cinnamon bun waffles. We have Bacchronuts. Stuff like that. We put on an extra 29 or 30 items since opening. This is without the chef's specials we run. We have 15 daily specials from the seafood station to the Chinese station. It takes a lot of planning.

GP: We kind of have to let them go wild. To reign that talent in is like kicking a puppy. I think one of the big things that changed for us in six months was that our expectations changed internally. We thought it would slow down and it didn't. It did the opposite. We had Gordon Ramsay Pub open and thought that will help it slow down. We have Nobu for that matter. We just kept going strong. It still hasn't stopped.

Does it seem like it's been a year?
GP: Yes and no. It does feel like it's only been a year. We think of things in terms of seasons It feels like we've been through all of them 12 times.

What's the must-get dish of the moment?
MVS: At breakfast, there are a lot of things. Red velvet pancakes, Bacchronuts, Bacchanal Benedict, patatas con chorizo with a poached egg on top, granola-crusted French toast. As far as dinner time, the sweet potato tater tots. Definitely the lamb chops. People freak over those too. The blackened chicken soup on the Asian station. Fried chicken with sweet potato fries. The ramen Tonkotsu.

GP: We do it all fresh to order.

MVS: A lot of people like the fried broccoli casserole. For dessert the black sesame mochi.

GP: The mochi period is huge. The lava cake.

MVS: I like the different gelatos and ice creams we have.

MVS: That's the problem with a buffet.

GP: There's a million different things you want to eat every day.

What dishes do you regularly sell out of?
MVS: On weekends, definitely the osso bucco with polenta on top. That one we can't keep up with.

GP: The street tacos. There's a line for them.

If you could add another station, what would it be?
MVS: For me, it would be a Indian station.

MVS: An Indian and a French station, where you could do the French classic coq au vin, rustic French stuff. All of my chefs come from French restaurants. One is from L'Atelier, Morels, Alize.

GP: Maybe a rotating station. Make it Indian and then French.

What's in store for the future?
MVS: A lot.

MVS: The biggest thing right now is a revamp of breakfast. We're going to go through a 50 percent overhaul on every single station.

GP: Right now, we have a big focus is on dinner. We need to do more for breakfast and lunch. We'll have more Southeast Asian dishes. More curries on there, especially vegan curries. We really want to focus on our vegan and vegetarian dishes. Out biggest demographic is interested in that.