Barley's Brewmeister on His Favorite Places to Sip Suds

Share All sharing options for: Barley's Brewmeister on His Favorite Places to Sip Suds

Sin City is home to a lot of restaurants and bars, but there are tons of hidden gems that the majority of Las Vegans aren't unearthing. To help guide us to these potential discoveries, we've enlisted some of our city's beverage players to share their recommendations for a random feature dubbed Beer Confidential. Know a bartender who wants to share some top cocktail spots? The tipline is open. 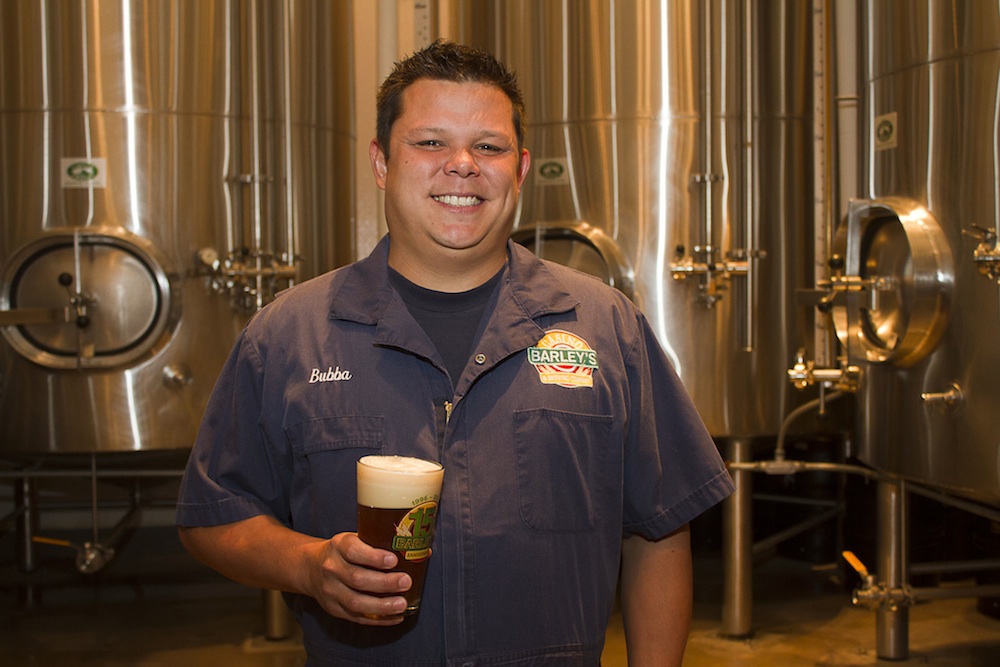 Friends call Jeffrey Amas "Bubba," and you should too. The brewmaster at Barley's Casino & Brewing Co. grew up in Honolulu and started working at Gordon Biersch Brewery & Restaurant as a bartender while he was going to school at UNLV. Like most 18 year olds fresh out of high school I had no idea what I wanted to do with my life, so by default I studied Business Management. Gordon Beirsch's head brewer Richard Lovelady gave him a chance to work for him, and a career was born. "To be completely honest, at that time I just wanted to become a brewer because I thought it would be fun to tell people that I made beer for a living," Bubba says. He landed an apprentice brewer position at Barley's Casino & Brewing Co. under brewmaster Jim Wilson for about a year until he was promoted to run brewery operations at Barley's.

"As a brewer I like that I get to be physically active and work with my hands, while still being able to show a creative side with recipe development," Bubba says. "Most of all what I like about brewing is getting to see people enjoy my craft. After all I brew for you, and nothing makes me happier than knowing that you have enjoyed one of my brews."

Here, Bubba talks about some of his favorite places to sup on beers when he's not brewing one for you.

When I am not working or drinking Barley's beers I tend to gravitate to other breweries or beer bars. Three of my favorites would be Chicago Brewing Co., Gordon Biersch, and Aces & Ales.

Chicago Brewing Co. is great because there is something for everyone. If you feel like relaxing you can head upstairs to their cigar bar to enjoy a cigar and sip on your favorite beer. Or if you are feeling a little more lively you can stay downstairs at their main bar where there is gaming and lots of fun people to meet. They have a friendly staff and it is always fun talking with head brewer David Pascual about his upcoming brews.

I have two favorite brews at Chicago Brewing Co. Their Wild West Tripel is their take on an Abbey styled Tripel. It is light straw in color and you will notice slight fruit and spice along with an assertive noble hop. Their Quad Damn is a Belgian styled Quadruple that is dark amber in color with a medium bodied mouth feel. In this beer you will notice plum, raisin, banana bread, and a spiced character. Both beers are high in alcohol yet easy drinking.

While at Gordon Biersch I enjoy drinking their seasonal brew, Festbier. Their Festbier is an unfiltered modern day Oktoberfest lager. It is bronze in color and has a dry malty finish. I enjoy Gordon Biersch for their good food and great beer, but most of all I go there to catch up with old friends. Gordon Biersch is where I started my brewing career and it is always nice to see the people that helped me along the way. Visit Gordon Biersch during their tapping parties to try their seasonal brew and strike up a conversation with head brewer Richard Lovelady.

Aces & Ales is a small beer bar that I enjoy going to when I need to relax and enjoy a good beer.  I like going to Aces & Ales after a long day at work because it has a pleasantly mellow atmosphere with a great beer selection. They rotate their draft beers frequently so there is always something new to try. Honestly, my favorite drink at Aces & Ales is whatever is on tap that I haven't had yet.