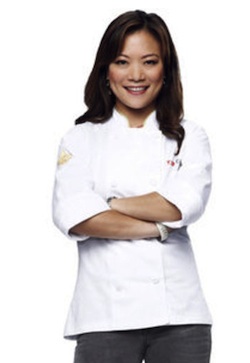 Top Chef New Orleans kicks off Oct. 2, and now Las Vegas Weekly talks to Vegas cheftestapant Shirley Chung about what she plans to do now that she's no longer working at China Poblano at the Cosmopolitan. Here she gives a murkily mysterious answer:

"I've worked for so many great chefs throughout my career and opened almost all of the Las Vegas restaurants where I've worked. I've learned a lot, and I'm ready to strike out on my own. There are so many chefs who come to Las Vegas but don't necessarily call it home, and I hope that will change, that we'll have some more homemade famous chefs."

So from that, it sounds like she plans to open her own restaurant here in Vegas. She certainly has the chops and perhaps the outcome of Top Chef could propel a restaurant of her own. Chung staged at The French Laundry, then worked at Bouchon, even opening Thomas Keller's restaurant at the Venetian. She worked with Guy Savoy and Mario Batali at B&B Ristorante at the Venetian before opening José Andrés' China Poblano.

Back in June, Emeril Lagasse, who returns to Top Chef as a judge, confided that a female chef from Vegas was on the show and "she does really well."
· Chatting with Las Vegas Top Chef Contestant Shirley Chung [LVW]
· China Poblano's Shirley Chung Makes Top Chef [~ELV~]
Shirley Chung [Photo: Bravo]