Share All sharing options for: The Latest Word on Downtown's Container Park

It is now less than a month from the presumptive unveiling of Downtown's multipurpose Container Park to feature, food, beverage, retail, live entertainment and a llama. The close-mouthed Downtown Project, over-minded by Zappos CEO Tony Hsieh, has not set an "official" opening date, but local rumor trusted it would be open in time for the two-day Life is Beautiful festival starting Oct. 26. Eater Vegas has the latest details on the project that could finally open a full year after receiving planning permission to commence building.

With a month to go, the Fremont East attraction has chosen to promote the progress with a series of upgraded renderings rather than photographs. They show the true extent of the children's' play area, the performing stage and signs that seem to confirm another local rumor, that one of Tony Hseih's favorite animals, the llama, would be living on site. The fire-breathing praying mantis sculpture has been operational for months. 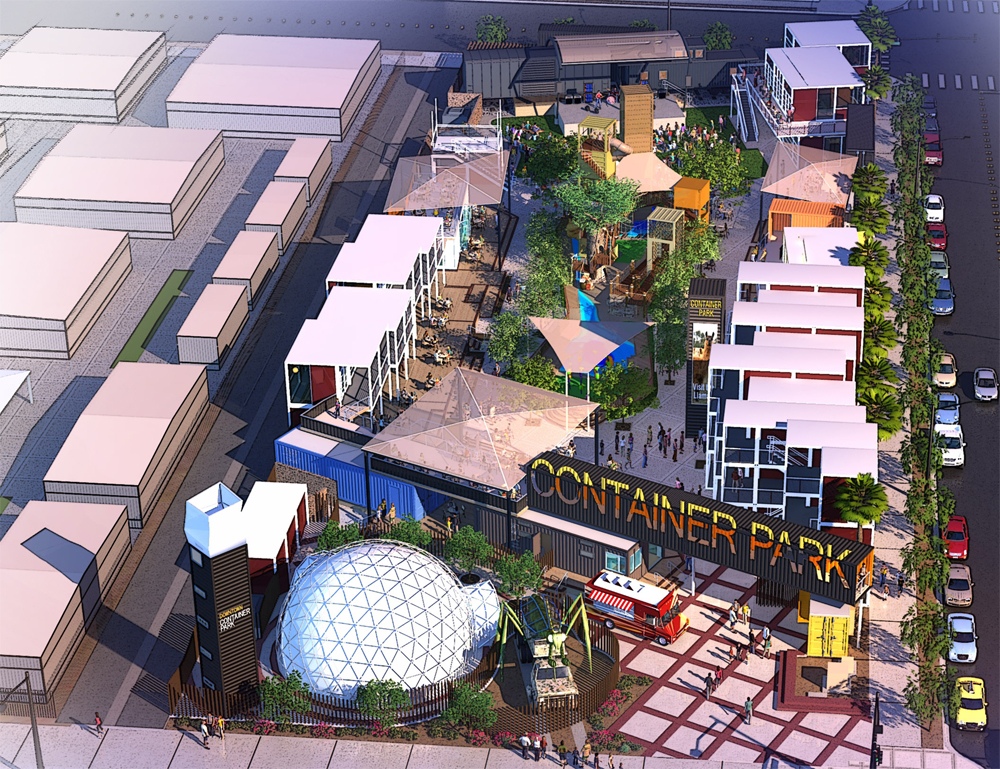 Despite the heavy emphasis on children and families, the park will feature The Boozery bar, wine bar Bin 702 and an e-cigarettes retail store. Food options include a Vegas expansion for L.A. based Pinches Tacos, a mini version of the neighboring Beat Coffeehouse called The Beatnik, the self explanatory Pork 'n Beans featuring input from chef Kerry Simon and a sequel to Cupkates from Tivoli Village.

One curiosity inserted into all the latest renderings is the prominent addition of a food truck placed at the front entrance. The truck's painted design "rays" are eerily reminiscent of local food truck legend Fukuburger, while the name written on the side of the truck, "Eat," echoes chef Natalie Young's restaurant across the street on Carson. Eat received initial financial assistance from the Downtown Project before opening.

Despite the proximity, visitors to Eat will not be able to see much happening inside the park. A stark concrete wall has been erected blocking that view. It will be decorated with a mural at a later date. The top of a train caboose re-purposed by L.A. based Bolt Barbers is all that is visible from the restaurant.

While a live event stage is being constructed in front of the train caboose, the park is currently not part of the Life Is Beautiful live music scheduling. Recent plans for the events cross out the Container Park on maps, with the designation "Off Limits." Instead, across Seventh Street, the empty lot next to the former Mamita's restaurant will house the Heineken Stage. And across Fremont Street, the festival will host the Homegrown and Heartland stages. It has not been announced if the park will be closed while an estimated 25,000 to 30,000 people per day walk past the brand new facility.

The renderings suggest plenty of seating next to Big Erns BBQ which has already begun finishing work on their brightly colored containers.

New word arrives that Stacey Dougan, a former specialty vegan chef at Wynn Las Vegas, will also be creating a "grab and go spot," tentatively named Pure. An un-announced second floor spot, The Charcuterie has continued to be included in recent permit applications.

Retail includes a jerky store, an art gallery and Art Box, which creates jewelry and home designs out of fused glass. They are expecting to open on Oct. 25. American Vagabond, a women's clothing and accessories store also believe they will be opening by the end of October.

SasaSweets, creators of local frozen favorites, SasaPops, list the opening hours of their future container to be 10 a.m. to 10 pm. and until midnight on Friday and Saturday. The park was once hinted to be a 24-hour operation.
· All Coverage of the Container Park [~ELV~]