The Gallery Nightclub Shutdown Is Getting Messy

Share All sharing options for: The Gallery Nightclub Shutdown Is Getting Messy

Things are getting messy with the abrupt shutdown on Gallery Nightclub at Planet Hollywood Resort after what turned out to be Saturday night's final hurrah. Robin Leach tweets that now employees and vendors are having a tough time getting their last paychecks and final payments. 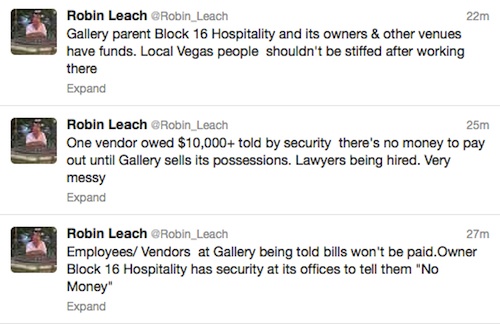 Employees/ Vendors at Gallery being told bills won't be paid.Owner Block 16 Hospitality has security at its offices to tell them "No Money"

One vendor owed $10,000+ told by security there's no money to pay out until Gallery sells its possessions. Lawyers being hired. Very messy

Gallery parent Block 16 Hospitality and its owners & other venues have funds. Local Vegas people shouldn't be stiffed after working there


So far rumors about the reason Gallery closed point to what Leach calls "major disagreements between the hotel and the club over its hard-core hip-hop entertainment attractions and patrons who lined up in the casino. 'They wanted a more diverse demographic that was more in keeping with the hotel guests rather than in conflict with them.'"

In addition, he reports that the Gaming Control Board visited the nightclub five times before it closed.

Joe Vargas of KingofNightclubs.com tells Leach, "Some employees showed up to work to find out the club was closed with no warning. Systems and alcohol were pulled out from the club after Saturday's final night, and everything was gone by Monday morning. Employees were shocked it was so sudden. They had no idea it was closing."

Update at 5:01 p.m. PDT: A publicist for Block 16 Hospitality and Gallery Nightclub writes: "Block16 Hospitality's first priority is compensating its employees of Gallery nightclub today, and all their vendors will be assessed immediately following the employee compensations. Block16 sincerely appreciates all the people who worked at and visited Gallery nightclub over its time in Planet Hollywood."
· Gallery Nightclub Shuts Down at Planet Hollywood Resort [LVS]
· Robin Leach [Twitter]
· All Coverage of Gallery Nightclub [~ELV~]