Your First 2014 Update on MGM's Park, Arena and Big Additions

Share All sharing options for: Your First 2014 Update on MGM's Park, Arena and Big Additions

While considerable construction at the front of the Monte Carlo and New York-New York resorts continues, the big MGM Resorts story of 2014 will be created behind these new environments, leading to a proposed mammoth arena and now, first word of a 80,000-square-foot shopping center complete with restaurants.

When finished, the two hotel-casinos will sit astride a park leading back to the 146-foot-tall, privately funded arena. Three new water features will be added and eight, 9-foot tall, 8 feet by 4 feet retail sales booths will scatter the park. Rue De Monte Carlo, the street owned by MGM that sits between the two sites, will be "realigned," probably matching early project renderings that completely eliminated its access to and from the Strip.

To entice people to wander back to the arena when it is not hosting sports events and concerts, a 40-foot-tall, two-story shopping center will be built and include new restaurants. The 80,000-square-foot space is comparable in size to MGM Grand's Hakkasan nightclub. 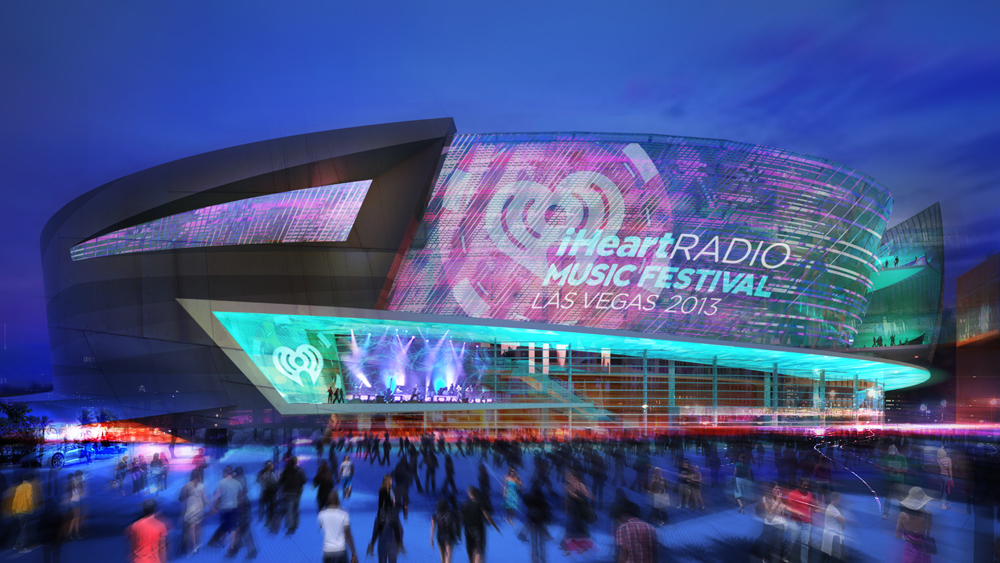 This development was initially known as The Park, but MGM Resorts have appeared reluctant to commit to that name. However, the company created for this undertaking is called Park District Holdings LLC, borrowing the "District" from MGM Grand's own restaurant and shopping row located across the Strip. The $350 million arena will feature 19,500 seats and is a joint production between MGM Resorts International and AEG Live. 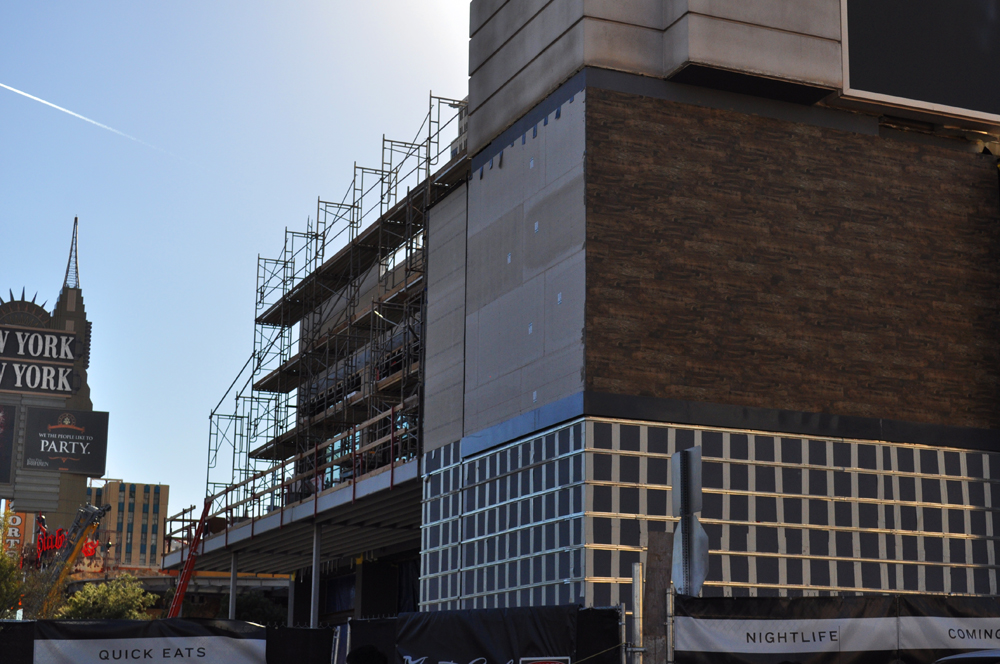 At the front of the Monte Carlo, work continues on the new dining additions of 800 Degrees Neapolitan Pizzeria, Sambalatte Torrefazione coffee shop, the Double Barrel Roadhouse and as first reported by Eater Vegas, Yusho from Chicago chef Matthias Merges. 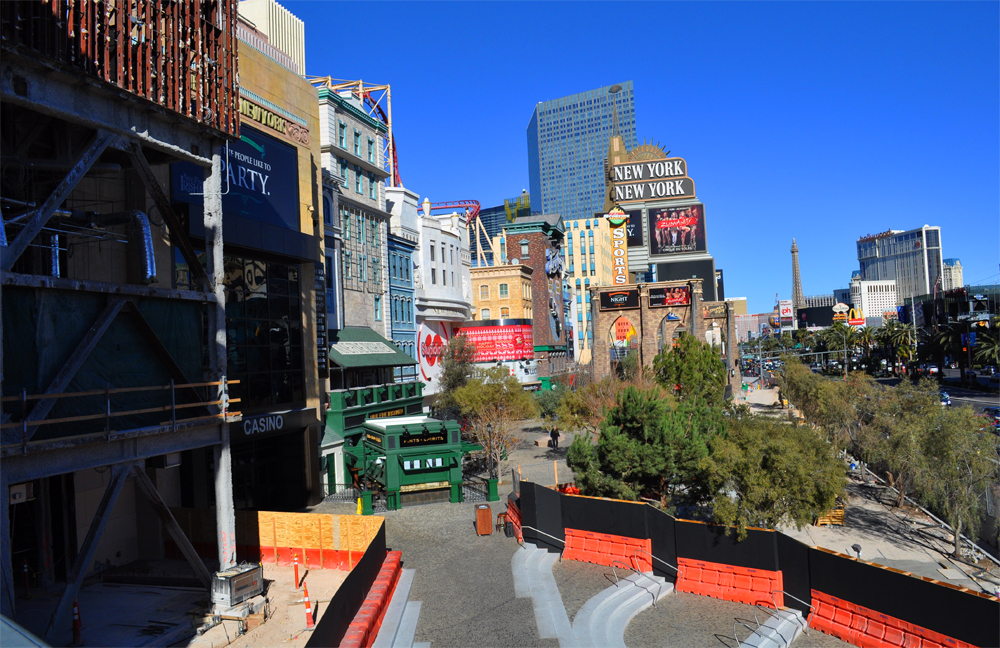 Over at New York-New York the multimillion dollar remodeled frontage includes newly opened Starbucks, I Heart NYNY souvenir store, a Swatch boutique and a Stupidiotic novelty gift store. Work has begun on creating a two-story Hershey's Chocolate World and possibly the long-rumored shuttering and transformation of the Sporting House Bar & Grill into a brewpub concept. 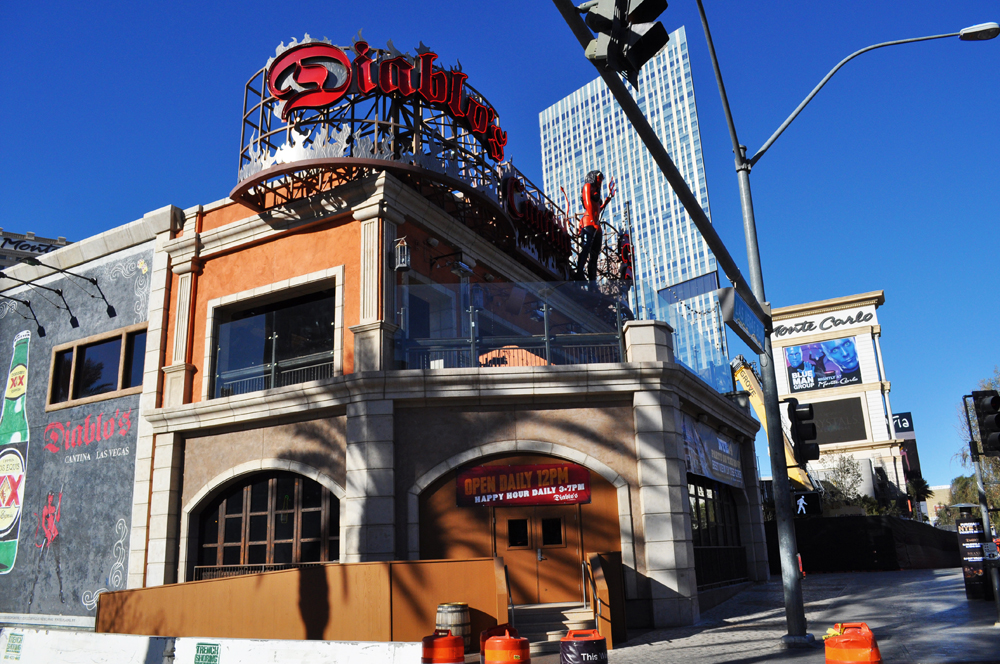 After the patios, walkways and assorted changes at the Monte Carlo and New York-New York are finished, they will stay as-is. The final, minor change will be the creation of a new outdoor patio on the south of Diablo's Cantina facing the new park. 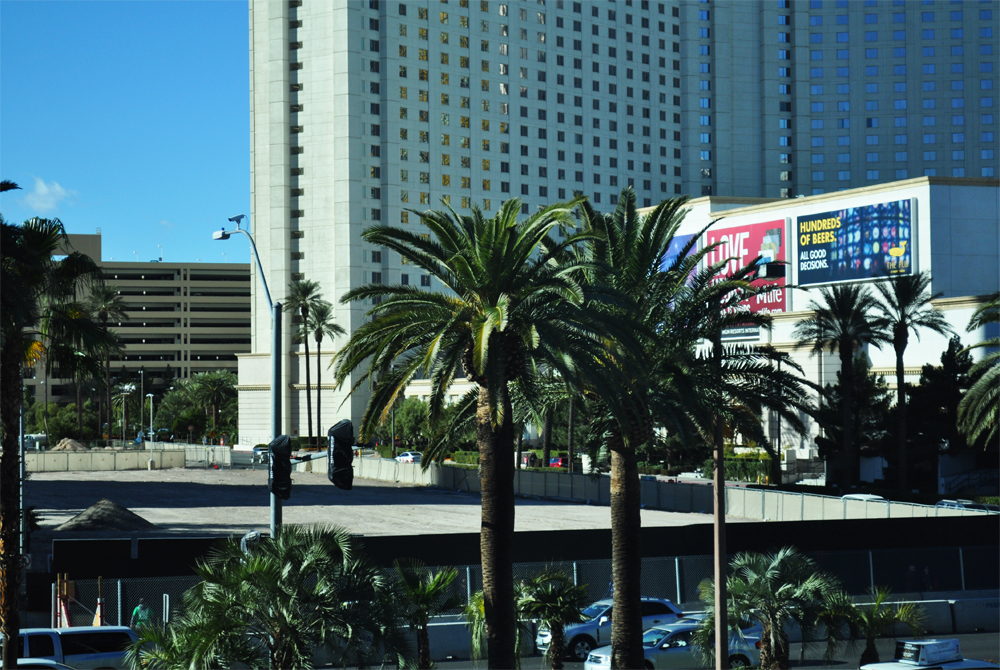 From the Strip, visitors will traverse the two acres to the arena behind the forthcoming Shake Shack. The cult-ish, but rapidly expanding East Coast-based burger joint is not planning on debuting until late 2014. Cultivating this park area goes some way to explaining the long timeline for the build-out. 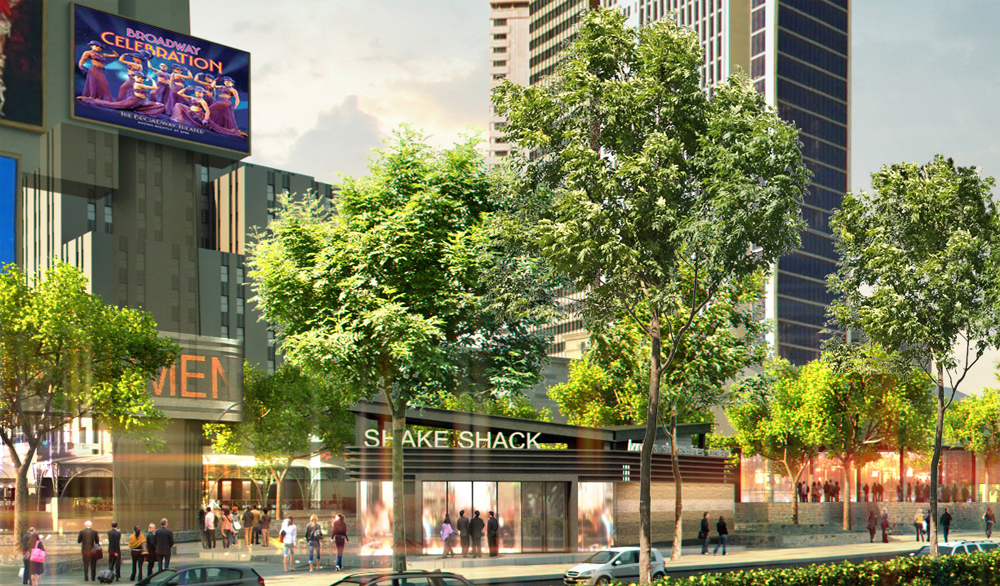 The arena is scheduled to open in the spring of 2016 and is expected to break ground within the next three months. No early world has been given on the timetable for the shopping center. Since, the arena will only host around 100 events a year, it will require some effort and star power to lead tourists that far off-Strip to a non-gaming attraction.

While too early to announce the dining tenants, it is worth noting celebrity chefs have taken steps into the fast casual, sports arena dining marketplace. Michael Mina is currently making a major commitment at the forthcoming San Francisco 49ers' Levi's Stadium, anchoring the facility with his Bourbon Steak & Pub steakhouse brand, featuring fine dining and a casual burger focused pub.
· All Coverage of MGM Resorts [~ELV~]

By Bradley Martin and Susan Stapleton