This week, the cheftestapants competed in a two part Quickfire Challenge that first had them making one perfect bite for Gail Simmons and then a vegetable dish for Tom Colicchio, with the winner taking home a Toyota Camry. Then Emeril Lagasse announced that the cheftestapants would make a dish that left their mark on New Orleans, and the winner's dish would be featured in his New Orleans restaurants. Here, Chung talks about what happened in the this episode of Top Chef, Moon Pies, mocking the judges and whether she made it to the final three in Maui.

Was it strange not to be doing the second Quickfire Challenge?
It's funny. Knowing that this was the last Quickfire Challenge, I made it more complicated than it should have been. It was a single bite on a fork. I can't put sauce on it. I think the flavor profile made sense. I was playing Jenga the whole time. I didn't care if I won. I really wanted to go into the finals. And I already won a car that I gave to my mother.

That's my thought process. Somehow I didn't want to win too much. My thinking translated into my food. I was heavy handed the soy sauce like Tom [Colicchio] said. When I tasted it at the last minute, it was a little on the salty side.

Sitting on the sidelines watching them cook was interesting. I never had a chance to do that in a Quickfire. We admire Nick. He's so organized and technical. He works very clean, although he overcomplicated it again.

After the Quickfire Challenge, when they were announcing the Elimination Challenge, is that when you found out you were going to Maui for the finals?
Yeah, that was really the time we found out. It was quite interesting that they released it early on the show, wow. We didn't know until then. Everybody's mouth was super sealed. We thought we were staying in New Orleans. It was quite a surprise that we were going to Maui. Pleasantly.

You found your culinary voice in New Orleans, so when Emeril Lagasse announced that you had to make a dish that would leave your mark on the city, that must have seemed like the perfect Elimination Challenge for you.
Yes, when he announced the challenge, I have to say I was really excited. I fell in love with the city and the food there. We get to meet the people and love the bold flavors of Creole flavors. I think it's the perfect food, representative of American cuisines. A melting pot.

I feel my culinary voice is a melting pot too. It's local-ingredient driven with the seasoning of Asian cuisines.

I feel like my culinary style is the new American style of cooking. I could showcase what I learned through this journey and cooking my own cuisine too.

You've worked with so many renowned chefs — Thomas Keller, Mario Batali, Jose Andres. What made it click between you and Emeril. He seems like your ultimate mentor. Emeril was the one who helped you find your culinary voice.
You know, when you're working for all these amazing chefs, you learn a lot from them. But they were also my boss. I will forever be their pupil because working for them you're not introducing your vision. When it comes to Uncle Emeril all he's trying to do cultivate my own cuisine instead of following his own vision. He helped me organize my mind and all my technical skills learned from those chefs and streamlined to my own cuisine. He helped me find my culinary voice.

Do you feel like you've been the most adaptable contestant? It seems like you're willing to adapt to the challenges.
I think this is not reflected on the show. This is me as a person. This is the way I am.

I moved around a lot growing up. I was stable in Beijing. We moved to America at 17. I had to adapt to that. I really fell in love with what America was creating.

At first, I was mad at parents but I think coming to America, I grew as a person and then after college I went to culinary school. After living in California for 10 years, I moved to Las Vegas to open Thomas Keller's restaurant. I had to adapt to a new culture and area and people. That really helped me.

I really adapted to the local culture. I really fell in love with the New Orleans food and people. Everything I tasted I tried to take apart and recreate.

I'm thankful to my parents that they moved me across the globe. It really helped me learn as a person.

I can't imagine if I was still in China. I was quite spoiled growing up. I was bitchy. Moving to America was definitely a humbling experience. I had my struggles but realized what's out there.

How tough was it to come up with a dish that represents New Orleans?
So we had this amazing dinner in Emeril's restaurant. He made this meunière butter sauce that is only in New Orleans. A Worcestershire beurre blanc. My head clicked that this was the sauce I wanted to do. It has Worcestershire with an earthy flavor. I immediately made the connection.

The Holy Trinity (onions, bell peppers and celery), those were the ingredients I wanted to use when I cooked.

At home Nina mentioned loved the barbecue shrimp dish. Knowing that's the route she was going to go, I thought I would use black vinegar in my sauce. I was happy she had the same thought I did. We're like sisters. 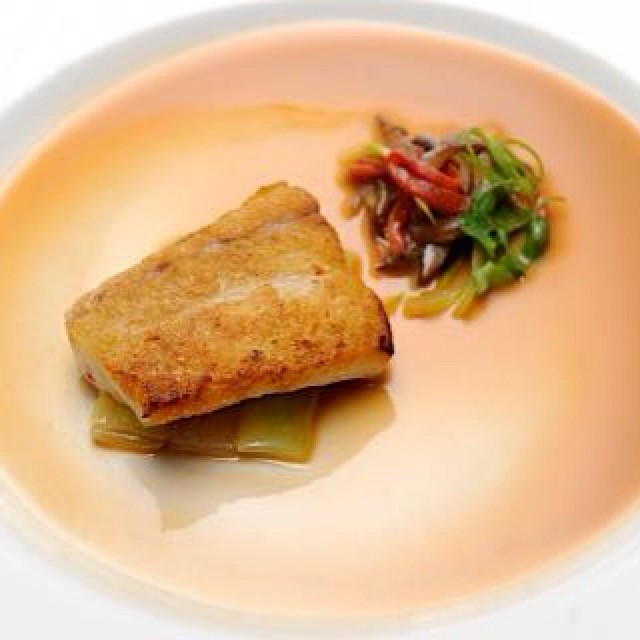 In the challenge, you said you were creating a dish that gave you the feeling that you're floating on the bayou. You told a story with your dish, one of the things you thought great chefs did with their dishes.
So this dish is also inspired by the Holy Trinity. It represents my journey to New Orleans.

West Lake fish is one of my mom's favorites. Throughout all trips we took, we saw a lot of bayou West Lake is one of the bigger lakes in China and the fish represented the feeling I have for the two locations. It really makes sense. I wanted to create my plating really calm with all the butter sauce as the lake. It was a little dark in color like the bayou and West Lake is calm on the surface. I made a raft of daikon and braised celery. Shiitake mushrooms were the Asian ingredient to add.

Although when I told Tom what I was doing during the walkthrough, he thought I was out of my mind. Later he said, "I thought you went crazy but you presented the dish visually. I get what you're trying to say."

I'm glad I didn't go crazy. You can taste every single flavor. It's simple but complex in flavor.

There was a little interlude between commercials where you talked about how difficult it is to talk about your dishes to the judges. Can you talk about that a little bit?
I have a chef crush on Grant Achatz. I've been listening to his stories throughout his career. I met him at a mentor's wedding. Normally I talk a lot, but I was stuttering when I saw him. I wanted to ask him to dance. I couldn't ask him. I was stalking him in the hors d'oeuvres line.

A lot of chefs are awkward. That was the only time I talked to him. When I saw him again, I literally lost the ability of speech.

Douglas Keane, he is well known in the Bay Area. All these chefs very familiar to me since I worked with chef Thomas Keller and Mario Batali. They're the slightly younger generation of chefs.

I lost the ability to talk. My mind was blank. My hand was shaking. When I came back in the kitchen, everyone asked, "What happened?" I'm not sure what happened. Normally I always have a lot to describe. I don't even know what happened. I was such a dork.

Your dish is going to be on Emeril's menu. How does that feel? And how about teaching Emeril how to make it?
Amazing. I couldn't believe especially with how I feel about Uncle Emeril. He helped me find my own voice. To feature my dish in his restaurants is so amazing. It's such an honor. Now all these people are going to taste my dish. They're going to taste how I represent New Orleans.

Now you're off to Maui. Anything you want to add?
Everybody thinks we're hating on Carlos. I made a comment that Carlos was only cooking Mexican. I thought we were leaving our mark on New Orleans, what it represents to you and then create a dish based on what you learned. He was going to do a dish he normally does in Chicago.

Nick was creating this dish based on New Orleans culture. Nina created a brand new dish. When it comes to Carlos, his dish didn't really fit the challenge, which is leave your mark.

I love Carlos. His food is really good — Mexican with some French technique in there. His dishes always taste good. I think a lot of people don't know I cooked Mexican too [at China Poblano].

Oh, Nina and I call Nick Moon Pie. He's dark on the outside and super fluffy on the inside. That reflects his personality as well.

You called him an asshole too.
I called him an asshole in the heat of the moment. He was being kind of aggressive. Once we're outside the kitchen, we're all really good friends. It was a misunderstanding about the temperature of the oil. He flipped out. I made him realize open your eyes because you're flustered.

Also one more thing. Bravo just put up these video clips where we're mocking the judges. Nick was Tom Colicchio, Nina was Padma Lakshmi and Carlos is John Besh. Then I play myself. I'm presenting them with chocolate chip cookies and they ripped them apart. Nick has a plastic bag over hair pretending his bald.
· All Coverage of Shirley Chung [~ELV~]
· All Coverage of Top Chef [~ELV~]