This week was the cheftestapants get a lesson in étouffée from John Besh, and then head to the Lousiana Seafood Festival, where they have to use two types of local fish and seafood in one dish. All sandwiched a trip to Besh's bayou home. Here, Chung talks about her biggest critic, her favorite thing in Besh's house and all the knife stabbing on the show. 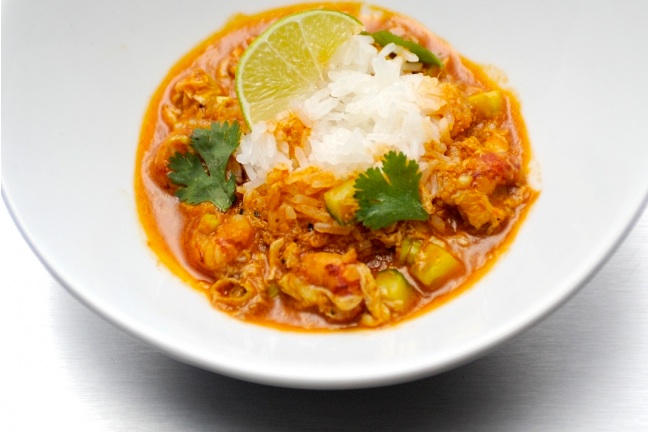 You were the only chef to use rice in your Quickfire Challenge to make étouffée. Were you nervous about that?
Well, actually I didn't think about it. I started cooking and I realized when I was almost done that I was the only one using rice. I found it surprising. Every time I had étouffée it was always over rice. I took the challenge rather literally.

Your decision earned you immunity this week. Congrats!
It was really great. That flavor is something I do at home all the time. Singapore chili crab étouffée with crawfish stock, cucumber and egg. I make that dish for my husband all the time. My husband is always my toughest critic. Whenever I open a new restaurant, he will give me a whole list of things he notices. And especially when it comes to Asian food. I never trained to cook Asian food.

His whole family loves to cook. I try to follow his mother around to steal her recipes. She doesn't share.

He's the reason I changed careers and went into cooking. We would bond over dinner and food and then we started to date.

How was it to eat at John Besh's house?
Oh my God, it was amazing. We knew it was going to be a beautiful home but we got there and it was gorgeous, sitting on the bayou. The outdoors and the pool and the food he made for us.

It's something we never dreamed of. We're at chef John's house!

You criticized his food for not having enough salt.
Once I said it, I was embarrassed. I always say how I feel. After I said it, everyone looked at me and was like, "Really, Shirley, you said that?" It tasted really good.

By this point in the competition, you've spent a lot of time in New Orleans. Do you have a new appreciation for the cuisine there?
Oh, I love New Orleans cuisine. I love the people there. They're all foodies there. In a sense, I felt like I had an advantage because I love flavor.

The people there are so genuine. I'm a food nerd and I have a great time talking to other people about food. I was having a really great time.

I'm definitely feeling more and more confidence. I'm finding my voice. At this stage, I know exactly what I want to do and the direction of my culinary vision. I'm getting used to the competition and the stress. I'm really genuinely enjoying it.

The judges mention that some of you played it safe with the ceviche card, but you seemed like you were taking a risk by doing your first cold dish. Did you feel like you were playing it safe?
That's 100 percent accurate. We're all going into the competition with multiple plans. So we get there and see what's the best seafood.

Originally I was going to make a hot dish, but seeing the location and the way the stations were set up, I changed my plan. There was not a proper cook top to sear fish. With amberjack and tuna, it was better to do ceviche. Normally I always do a hot dish. Everybody loved it. It was a challenge to keep everything cold. We were cooking outside and it was really hot. I think a lot of us thought eating outsdoors, it would be nice to have a cool dish.

Did you know about the tension between Carlos and Nick while you were cooking?
I think I'm the only person who didn't know. With ceviche, you have to make sure the knife cuts are perfect. I had seven ingredients including pickled chiles, and I wanted to cut everything perfectly. I didn't notice at all. I was in my little bubble the entire time.

I figured you were the only one not called in to talk to the judges because you had immunity. It seemed like they really liked your dish.
The people in the top really deserved it. I was cooking next to Bryan and tasting his dish throughout. I really do think Bryan, Stephanie and Nina cooked the best dishes. They all were well executed.

Were you surprised that Carrie was sent home?
Yeah, I was really surprised. We all thought it was Carlos for sure.

I was in my little bubble, so I only tasted components of Nick's dish and not the whole dish.

Nina was sweet and brought over one of her dishes.

I was busy all the way through. I think I was the last one serving. I didn't get to taste Carrie, Carlos or Stephanie's dish. I think Carrie just over thought it.

Anything else you want to mention?
It was a really great overall episode, eating at John Besh's house and everyone at the event.

I can't get over them [John Besh and his wife Jenifer] knowing each other since kindergarten. He's just full of love. We wanted to stay. Nina says she wants to move in.

I know this is off topic, but he had the most amazing bathroom ever. It was lined with all the menus of al his favorite restaurants like Commander's Palace. We all had to take turns going to the bathroom. His kitchen was a chef's heaven for sure.
· All Coverage of Shirley Chung [~ELV~]
· All Coverage of Top Chef [~ELV~]