It's Official: The Former Bill's Gamblin' Hall Will Be The Cromwell, Opening This Spring

Share All sharing options for: It's Official: The Former Bill's Gamblin' Hall Will Be The Cromwell, Opening This Spring

Yes, the rumors are true. The hotel being built on the corner of Las Vegas Boulevard and Flamingo Road is officially called The Cromwell.

Back in October, Caesars Entertainment ended its relationship with the Gansevoort after Massachusetts gaming officials questioned alleged mobster ties with one of the Gansevoort investors.

Along with the name change to the former Bill's Gamblin' Hall, the other major change is a vague "spring" opening and news that rooms will go on sale starting Feb. 21.

The resort plans to tour a 40,000-square-foot casino, a hotel lobby bar, a lounge, a restaurant by the Food Network's Giada De Laurentiis and a dayclub, nightclub and after-hours venue from Victor Drai. The $185 million renovation of Bill's Gamblin' Hall started last February when the resort closed.

Inside, parent company Caesars Entertainment is now saying the inspiration is the Costes Hotel in Paris, so expect to find black Parisian-style awnings and gold fixtures on the windows. The Las Vegas Sun reports that the hotel lobby is reminiscent of a parlor with accessories and bookshelves with leather-bound books. Upstairs, find 169 regular rooms built out like "Parisian loft-style apartments with distressed hardwood flooring and vintage luggage motif furnishings. The lighting will recall French provincial styling. Black-and-white mosaic-tiled shower walls act as the canvas for captivating English-French phrases." 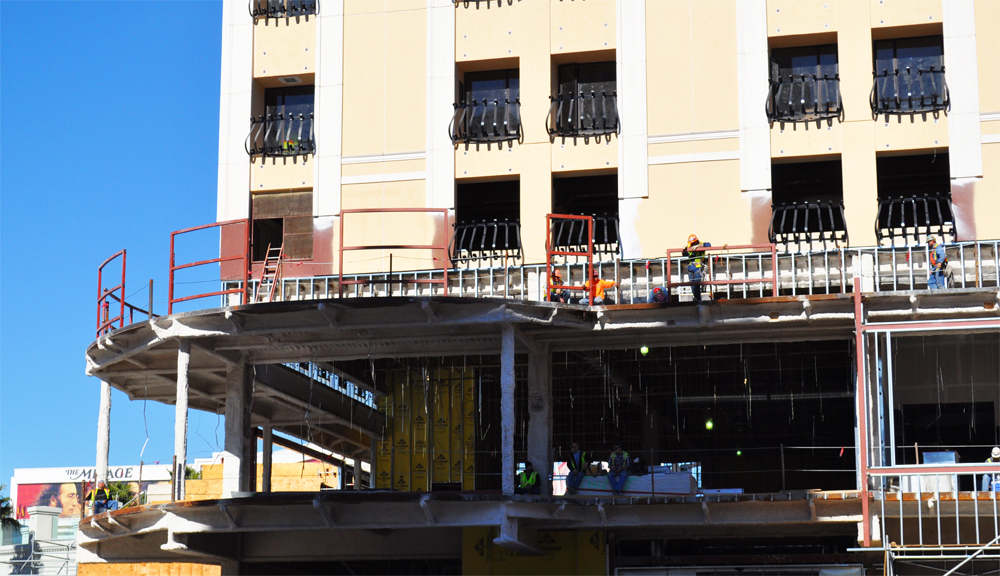 One other change comes to Giada De Laurentiis' two-story restaurant restaurant. Instead of a balcony at the front, there will be automatic retractable windows that look out on the Bellagio fountains. Giada's will feature an antipasto bar and warm colors and natural lighting. Earlier this month, De Laurentiis previewed dishes at a $5,000 a plate dinner at the Sundance Film Festival. She plans to serve breakfast, lunch and dinner as well as handle all in-room dining.

Victor Drai returns with his Drai's After Hours in the basement along with a new rooftop nightclub and dayclub. The two pools on the 10th floor in the shape of bow ties will be nine feet deep, while upstairs, a three-foot spa pool with an infinity edge and Strip views will be three feet deep.

Estimates last February pinned the renovation at 15 months, so May could be a doable deadline.

In the meantime, here's a video with a preview of what the hotel will be like when complete.