Share All sharing options for: First Look: Take an Inside Tour of Daniel Boulud's DB Brasserie

The renderings are so vivid you could easily mistake them for photographs, but here are the designer's conceptions for chef Daniel Boulud's long-awaited return to Vegas at the Venetian. The remarkable, lifelike images hosted by architectural and design firm Jeffrey Beers International confirm details revealed to Eater Vegas of Boulud's DB Brasserie, projected to open this spring in the former Valentino space.

With an estimated per-construction valuation of $3,500,000, their ambitious competition timetable tags an opening day close to the end of March. If that early schedule keeps its pace, work should be well under way on the huge central skylight described by the design team as "reminiscent of those in classic Beaux-Arts train stations." 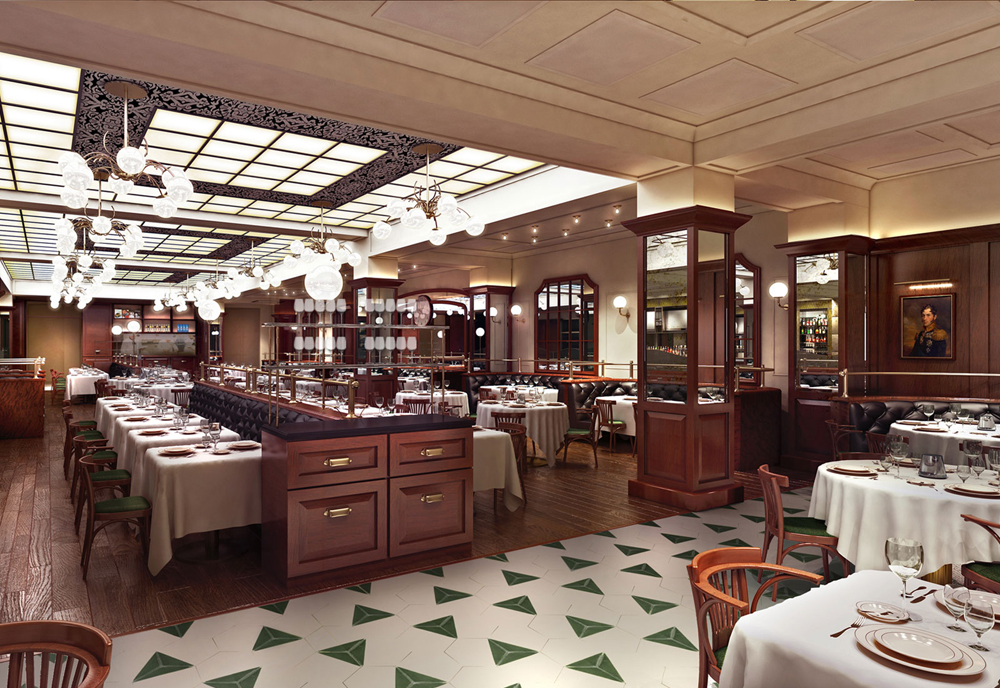 The inspiration of historic Art Nouveau brasseries is combined with modern and occasionally playful touches. The chaise lounge shaped footprint has the advantage of inheriting the working kitchen from Valentino, so the majority of the work has been focused on the visible space.

The restaurant faces the casino floor and the promenade leading to the resort's Grand Canal Shoppes and restaurant row. Behind the tall windows, pedestrians will spy a lounge area with sofas, chair and cocktail tables and a bar with 11 stools backing onto the main dining room. A tile and glass walk-in wine room is next to the bar, constructed with horizontally stacked bottles, 20 bottles high and lit for effect.

Two video screens mounted behind the bar are destined to run French films. The renderings include frame grabs from the 2011 Academy Award winner, The Artist. Other conceptual artwork includes photographs in the style of Brassaï, a mounted train station clock and a military officer portrait reminiscent of a member of the House of Bonaparte. 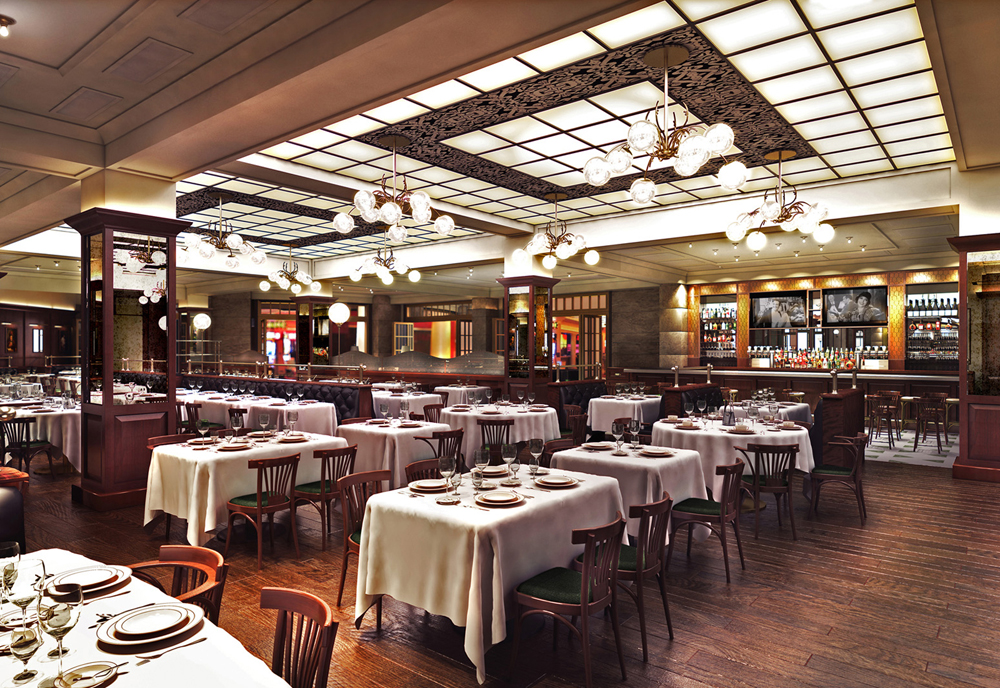 The accents include antique mirrored and etched glass, brass railings and pulls and a walnut wood and tile floor. In the lounge, ornate carpeting rests under deep, C-shaped curved chairs and sofas. The semi-circular shape also translates to the main dining room banquettes.

The white dining table tops feature custom graphics with green vinyl upholstery chairs or black tufted booths. A private dining is hidden away at the rear of the main room, parallel to the kitchen. In addition to the faux skylight, Art Deco lighting and sconces glow from filament light bulbs.

With Boulud's return to Las Vegas, one éléphant in the room remains just around the corner. DB Brasserie is adjacent to the still in business Pinot Brasserie. Early templates for DB included exterior signage promoting their "choucroute," and "plat du jour" menu, matching the exact same texts on the signs outside of the current Pinot restaurant. While dueling brasseries could become this year's version of Las Vegas' pizza and burger obsession, the future of Pinot Brasserie in its current form seems in doubt.

Boulud ran DB Brasserie at Wynn Las Vegas from 2005 to 2010. The new menu's focus will be an "updated version of Daniel's original Vegas outpost, bringing seasonal French cuisine and signature brasserie dishes with a modern twist," Eater Vegas was informed in December.
· All Coverage of DB Brasserie [~ELV~]