John Arena and Sam Facchini on 34 Years of Metro Pizza

Share All sharing options for: John Arena and Sam Facchini on 34 Years of Metro Pizza

Welcome to a special Pizza Week edition of Lifers, a feature in which Eater Vegas interviews the men and women who have worked in the restaurant and bar industry for the better part of their lives, sharing their stories and more. 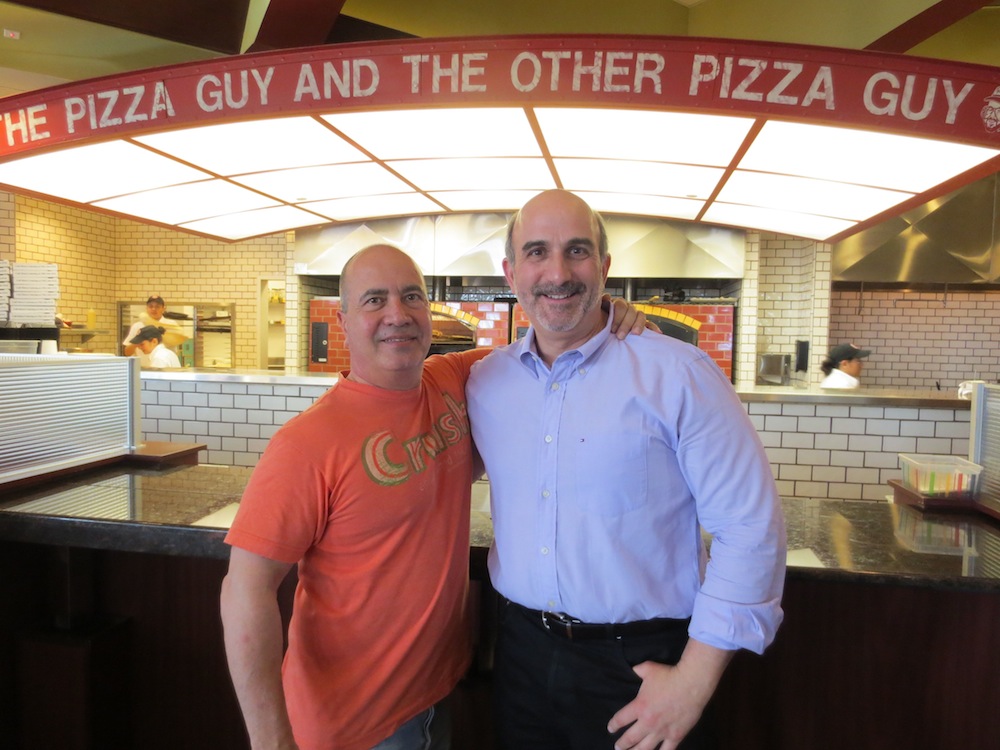 John Arena and Sam Facchini had four things in common when they first opened Metro Pizza — they were cousins, they grew up in their family's pizza business, they both fell in love with Las Vegas and they knew that community was an important part of any pizza joint. Thirty-four years later, the duo still run the six Metro Pizza locations all across Las Vegas that have become a favorite of families and friends alike.

Here, the two look back on how they started in the pizza business selling all of their belongings to move to Vegas, those first days when even as practically kids themselves they would do just about anything for their customers and even their Pizza Olympics. Grab a slice and read on.

Can you tell me how Metro Pizza got started?
SF: How John and I got started is a great anecdote. We are third generation pizza makers. Our grandfather got started back in 1928 selling slices on the streets of New York City. In 1967, I was 11 years old and our family had Centurion on Long Island owned by our uncles. John was in eighth grade and I was in seventh grade. It was the place in town to go.

One day, John asked me if I would like to work there. I loved the idea. We went to the Centurion. Uncle Rocky looks at me. Who's this? This is Sammy, your nephew. He's come to work with me.

John to his credit split his 50 cents an hour and we have been equal partners ever since.

JA: The punch line is I split the pay but made him do all the work.

SF: 13 years later we moved to Las Vegas and started a business. We were in our early 20s and it as a small pizzeria. Less than a year later and the sales of that location sextupled and we were doing $15,000 a week business.

JA: At a time when pizza cost $5. We were at Flamingo and Sandhill and kids rode horses up to our store.

SF: We were five miles off the Strip. It really was at the time the best residential comm in Vegas.

SF: Someone was watching over us at the right time and we were the right people. We have retained many of those same customers.

JA: We remember every customer from that day. We've had that kind of longevity. We would basically do anything for our customers. They would call to order groceries and we would go to Smiths to pick them. We did anything our customers asked.

SF: People would call us and say, "I'm going out. Could our kids stop by?" and we were like kids ourselves.

But what made you come to Las Vegas?
SF: John and I had been out to Vegas the summer before for a single guys' vacation We travelled to the coast. We started and ended a very long vacation here in 1979.

We went back and all we talked about was Vegas. During that period of time, John and his dad wanted to buy a pizza business outside of New York. In 1980 New York was hurting. We wanted to go anywhere but there.

We just started looking around the country. Because we had loved Vegas so much, our relatives remembered that.

My father was an immigrant from Italy. One day, my father who spoke with an Italian accent, gives me this fortune cookie-sized piece of paper. He says, "Here is a pizzeria for sale if you dial that number."

I put it on my dresser and left it there for four months. When I found it again, I thought, I never dialed this number. Should I call?

That was in April 1980 and within five days, we flew out. We looked at the books and checked everything out.

John didn't even make the trip. He was willing to change the course of his life based on my weekend. That was Easter weekend in 1980 and by the middle of May we had our bags packed.

JA: We sold everything we owned for a down payment, which meant we had no way to get out here. We found a service to drive a car to LA. We loaded it up. By the weekend, we had an apartment across from the Hacienda. It was us and about 300 hookers. We had no furniture and slept on the floor.

We opened that store. We bought all our supplies COD. We had $30 left after started.

SF: We were invincible. We never assessed the risk. The community we landed in embraced us. They totally embraced us. The existing business had only been there for a year. What we didn't change was the product. We knew this business. We knew what it was like to be a community business.

Within weeks we had forgotten we were from New York, not because it was a bad place, but we had found home.

We're close to people we met in that first week.

JA: Along that journey there as that traditional New York pizzeria and that mindset and embracing that diverse world of pizza. We came back and kept incorporating those ideas. You could come in from anywhere and it reminds me of my hometown place.

JA: It was called The Original New York Pizza. I remember the first customer who came in. Steve Morris came in that first day. He was from Detroit. "But I like the pizza in Detroit." When you live in New York, you think the sun rises and sets on New York. All of our customers had their own unique touchstone pizzas. We were adaptable.

We've changed tremendously in the past 35 years.

We wanted to provide a welcoming place. We invested in travel and connected to pizza. We try to do what we can to promote education about our industry. Not only do we sell pizza but elevate pizza awareness.

That was how Sam and I developed the program at UNLV. This is a $50 billion a year industry.

SF: We love to have fun. We have over time perfected or striven to perfect the pizza dining experience. People have to leave having a great time. This place feels like my place. That's what eating pizza's all about. It's a shared experience with community and nostalgia and negotiating what you want to eat.

JA: It's a very collaborative food.

SF: We came here with the love of pizza and the service of pizza. It's been in our blood since 1928. Rather than stay put, we're always in motion.

SF: It was modeled after the Olympics. In 1980, the Olympics were held in Los Angeles, so we had an Olympic-like event that summer at our own stores competing. They had their own national anthems, their own medals. We had 10 events over 10 weekends over the summer — pizza making, clean up, answering the phone, delivery. We did it for six straight years when it became too complicated. It was a great way for our employees to work in a different location and take on the challenges of different jobs.

JA: The overall points winner won a trip to work in a pizzeria in Ireland. It became a very competitive event for our employees.

We were heavily involved in the Pizza Expo. They jumped on it and blew it up into this international competition.

We would initiate the games at Flamingo and Sandhill and run with a pizza paddle and hand it off. The person who ran last won the last year's competition and he would run in and light the ovens.

SF: It was very intense.

JA: We always got a lot of local TV coverage. We just had our own creativity and a telephone.

SF: We would have our own Olympic trials in the stores. There were two finalists in each event. For the clean up event, we would destroy our restaurant the night before. They were given an hour to clean it. I never saw anyone work as hard.

It was really challenging. The customers we would send in had scripted questions to get the reaction. Whatever it was to get that aspect of the job was addressed.

Pizza box making was the opening event as a tribute to our first jobs. It really taught us that there was no limit to what we could do creatively.

Do you have a favorite pizza you like to make, something you always enjoy people ordering?
SF: My favorite that I like to eat is the one in front of me at the moment. I haven't made many over the past few years.

JA: I haven't made many in the pizzas in the past hour

How do you keep up your enthusiasm for the pizza business?
SF: We're coming on 34 years in this town. It's all been a journey. The journey is far from over. How do we make it better?

JA: First day we unlocked those doors, the anticipation. We're like that every day. We're every bit as excited about our future as we were on day one.

When I was in Mississippi, we found this hidden gem in this little town. We're still excited about that and learning about what we're doing.

People ask you to make pizzas from their hometowns. How do you do that?
JA: Pizza, it's whatever you grew up with. Everyone is convinced that what they grew up on is the best in the world.

Mayor Oscar Goodman had this pizzeria he went to with his wife on their first date, Marrone's. It has this pungent cheese on it. I couldn't figure it out. I asked him, "Can you go to this place and send me one?" I figured it out. That's his touchstone pizza. It's the pizza that moves him. He he remembers that first date with his wife.

SF: That's something we learned early on moving here, after we spent just a little time here. There are other ideas out there. And if someone wants to buy their nostalgic pizza, why not? It's a taste of home even down to the name. Anywhere you go there's a metro something. We strive to try to recreate some sense of home.

JA: After being called Metro Pizza for 30 years we would never think of changing that.

SF: When we travel, we always introduce ourselves to get a chance to make pizza with these people from Alaska to Rome. We want to share in the pizza.
· All Coverage of Metro Pizza [~ELV~]
· All Coverage of Pizza Week 2014 [~ELV~]