Share All sharing options for: Charlie Palmer Talks About 15 Years of Aureole

Fifteen years ago, Las Vegas unveiled its newest resort, Mandalay Bay, taking cues from the Bellagio, which opened a mere four months before, bringing in celebrity chefs including Charlie Palmer. At the time, Palmer's Aureole in New York City was one of the biggest restaurants on the scene, and his version in Vegas brought with it a four-story wine tower, a pond in the back with swans and Palmer's New American cuisines and a massive collection of wines. Here, Palmer talks about why change is always necessary for a restaurant's success, how dishes change over the year and just how Mandalay Bay convinced him to open a second location in Las Vegas. 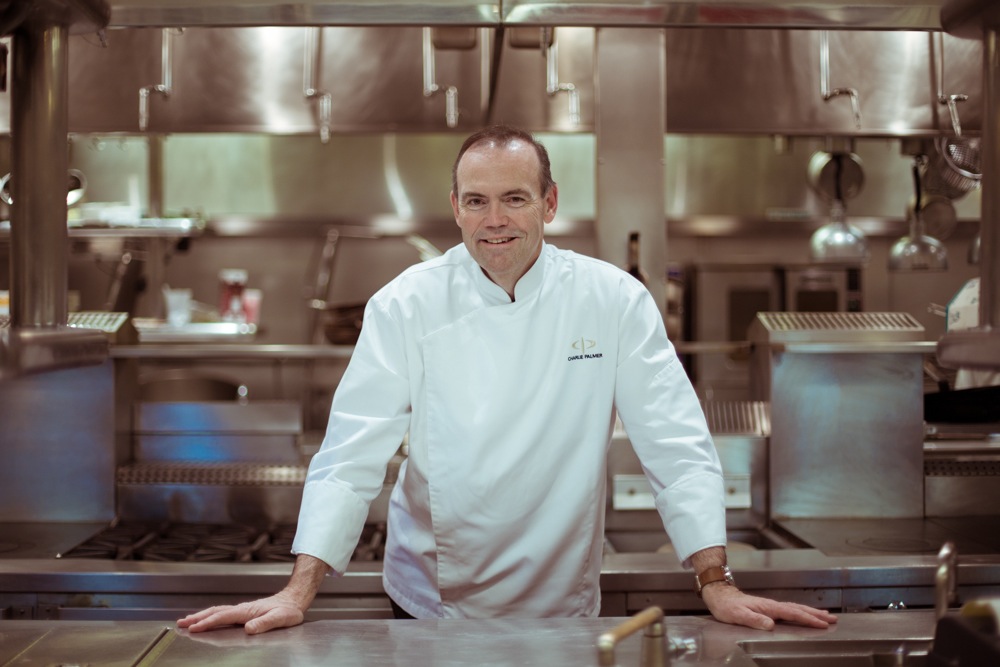 How did Aureole come together?
Bill Richardson was the originally the COO of Circus Circus and that became Mandalay Gaming. He came to New York and asked if I would like to do Aureole in his new hotel. He's the most non-Vegas Vegas guy I ever met. He sent a plane out to show me the project. "If you don't like it, you can fly home."

We did this on a handshake. I liked the idea. I loved the possibility. I asked if I could work with Adam Tihany on design. He said, "If he's the guy you want to work with."

I just felt comfortable with the guy.

I went to Spago and then to Emeril's place in the MGM Grand. Andre's was downtown. We did a restaurant tour. Back then, they would show me the buffet. I said, "That's not what we're talking about."

Then of course everybody in New York told me you're crazy. I said, "You're crazy if you're not looking in Vegas. You're living in a vacuum."

People ask me how Vegas stacks up with food. It's the No. 3 or No. 4 food city in the country after New York and San Francisco. It's creative and interesting, global and ethnic on different levels. Vegas is right there. There's not another place you can go to see the depth of different offerings.

What are some of your favorite restaurants in Las Vegas?
I try new stuff when I get time. I go out different places. I've been to Lotus of Siam and been to Raku and I've eaten very bad Chinese food late, late at night. I don't know it's not good until the next day. I've tried to taper that anyway. I still don't think there's a late-night city like New York.

What's changed here over the years that kept you current?
What I preach to all our team members, we have to constantly ask ourselves get better at what we do. We can't look at ourselves at the peak and we can't say we're OK.

You recently moved Aureole in New York to a new location after 20 years. Can you talk about that?
Aureole New York was still very successful. People would ask, "Why would you move? You owned the building." It's in a different location and neighborhood. You could have stayed in this townhouse for another 20 years. But it was a box. It was never going to change. At one time, I had the crazy idea to add a floor.

I knew we had to do something drastic and move it to a new location. To me how exciting was that to put ourselves in a position to learn? Now we're in the Theater District in Times Square. We have the tourists, the theater-goers and Bank of America above us. We had to rethink everything we did. Now I have a restaurant that's multidimensional. We have a great catering space that only gets filled through the excitement of the restaurant itself.

New York is a good example. People really thought we were crazy. They said, "You've gone off the deep end." I said, "This is the right thing to do."

That restaurant is incredibly exciting and cutting edge and all the things I thought I could want. The dining room, everything is better.

We weren't afraid of losing clientele. A lot of them are old and dying and if they love me, they'll come.

Everybody when they came out here from New York, they thought the kitchen was glamorous. The sheer size of the space is amazing. It's still a big kitchen for the square footage of the restaurant.

Have any of your dishes survived for 15 years on the menu?
I don't think there's dish that survives everything. There are dishes that become classic but again I think of that the same way I think of everything in the restaurant if you do it too long.

Like the scallop sandwich. We stopped doing it. It was no longer cooking; it's mechanical. In our trade and business, repetition is the only way you get better at something but there's also the danger that you're not inspiring, you're not introducing new things and it becomes mechanical.

We have to transfer this passion and this culture to a group of people. That always involves new and interesting things, not for the sake of changing but for the sake of being better. I always challenge our chefs to do something new.

My belief is our guest is going to find another favorite thing on the menu. They get in a rut.

The real feather in our cap is when someone eats a dish in our restaurant and can't wait to come back. That's a limited life. It's not going to be the same love the sixth time. That's not a proven science, just a philosophy. We have to be evolving. That's the right term. It makes me think about what we do every day.

What's in store for the future?
Chuck Bowling is a great guy. He gets food and beverage. They're strategic with what they're doing. They're looking at each thing individually.

One thing I learned when I first came here and I didn't know about gaming was that if we drew clientele from the Bellagio, 51 percent end up gaming at this property. At that time the Bellagio was not owned by the same company.
· All Coverage of Charlie Palmer [~ELV~]
· All Coverage of Aureole [~ELV~]