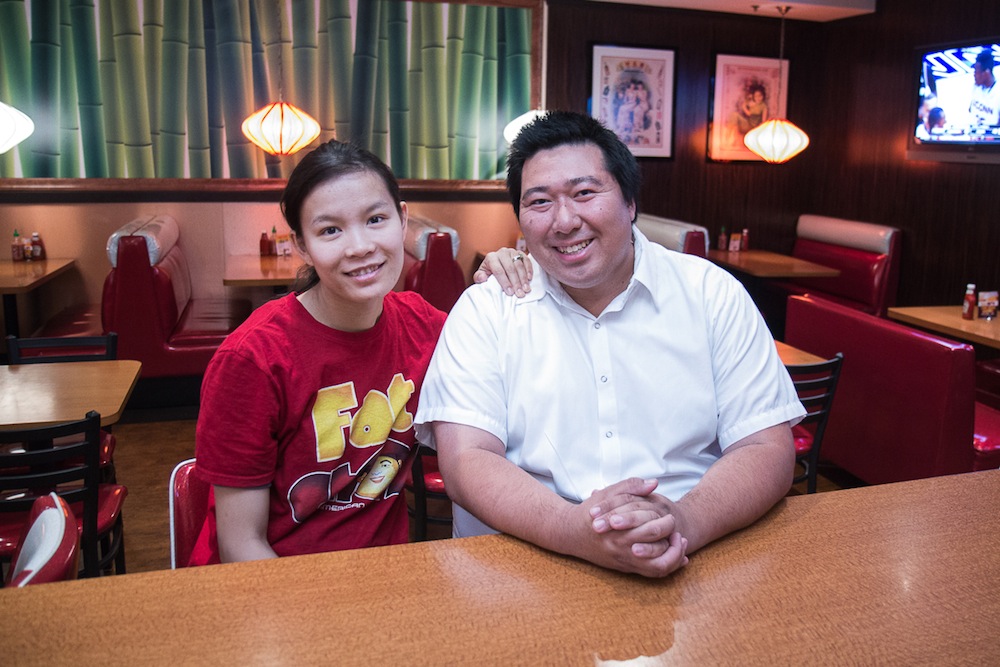 Sheridan Su and Jenny Wong have a hit on their hands with Fat Choy, the three-meal restaurant with an Asian-American twist inside the Eureka Casino. Su banked on his tasty bao sandwiches that he made on a food truck and then inside a beauty salon to draw in fans to the tiny casino. Now they clamor for the short rib rice, bone marrow and the infamous Fat Choy burger. In fact, on one Saturday night this past year, three food writers were spotted in three different booths at the restaurant. Yes, it's become a must-visit. Here, Su and Wong talk about how the restaurant came together, how diners react to favorites being removed from the menu and what's next for this beloved joint. 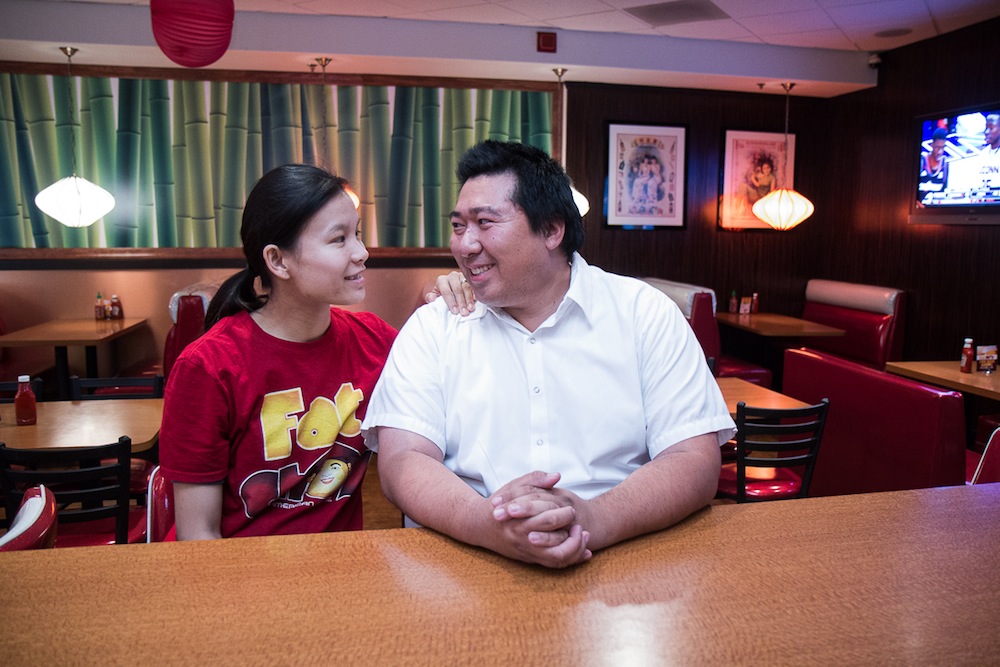 How did Fat Choy initially come together?
Sheridan Su: I've been in Las Vegas for nine years and most of that was spent cooking on the Strip. When Jenny and I started on this journey, we've always wanted to create something locally. While we put bids on a few spaces, none of them seemed the right fit for us. While working on the Great Bao food truck one day, the owners of Komex called and said we should take a look at the cafe inside Eureka Casino. Things progressed very quickly. The first day we met with the owner of Eureka Casino, we ended up shaking hands. The next day, we sat down with the president, the director and general manager of Eureka and began planning the restaurant right away.

A couple weeks prior to that first meeting, we got a house just a couple blocks away from the casino, in the Beverly Green. So this was opening a restaurant literally in our own neighborhood. It's also the first Asian-American owned casino in Nevada, which is fitting for our Asian American diner. My son was just born. I had great support all around and it just seemed like this was meant to be.

Were you given any direction from the Eureka in terms of the food?
SS: When we took over the operations of the restaurant, they said they wanted to keep a couple staple dishes from the previous menu that the casino players really enjoyed. The classic cheeseburger, cheese steak sandwich and Buffalo wings made it onto the Fat Choy menu. After that, they said to cook what I was passionate about.

What changes did you have to make to the space in order for Fat Choy to open at the Eureka?
Jenny Wong: Being located in a historic mid-century neighborhood, we wanted to keep the retro feel in the dining room. We took the colors that we used for Great Bao (red and white) and reupholstered the '50s style booths and bar stools by the counter. We added a chalkboard wall, announcing the day's specials, along with our own posters. We included a large bamboo background framed by wood to give a more natural feel to the room. We added red and white lanterns to brighten up the room. We asked Eureka Casino's graphic designer to help us create a story wall, inspired by OogOog video, that told a story of our journey. Also, we were very fortunate to be able to collaborate with the casino to be the first independent restaurant in Las Vegas to have a Coca-Cola freestyle machine.

What have you learned over the past year?
JW: We have learned that successful restaurants do more than just great food and service. It's making a connection with our guests. It's about creating a feeling. We have learned to follow Danny Meyer's golden rule of 80/20. Truly, there are no guarantees in life. As such, there is no guarantee that every single guest will love our food or service, no matter how great some may think Fat Choy is.

We have adopted David Overton's philosophy that word of mouth is the best kind of advertisement. We have learned that every person that works at Fat Choy is a very important piece of our puzzle. We had our share of staff turnovers before finding the pieces of the puzzle that we have now. An establishment truly runs off of great employees, so great employees need to be treated with care.

What was the initial menu testing process like?
SS: The idea was to create a diner with Asian comfort foods. The current menu is a reflection of how I, along with many Asian-Americans, grew up eating in this country. For school lunch, we might have a grilled cheese sandwich. For dinner, it could be steamed bao or wonton soup or a rice bowl with the family. It's a melting pot of food memories.

Literally the team took a week to do everything. Teddy's, the previous restaurant, closed Jan. 1, 2013. Our staff came on Jan. 2 and we opened the restaurant for a soft opening for employees and their families on Jan. 7-8 with a grand opening on Jan. 9. We just cooked nonstop from morning until night until we got the dishes down.

What dishes are most popular here?
SS: As mentioned earlier, the Fat Choy Burger is a huge hit with people. The short rib grilled cheese has its own bandwagon. The bao and sesame noodles are also really popular, because people love to get the dishes that started our story.

How are dishes such as the bao, bone marrow and Fat Choy burger going over?
SS: Those dishes have almost become iconic at our restaurant. If we try to take any of those off the menu, that causes an uproar.

I started making bao back in 2006 when I was cooking at Social House. I've had guests come in who've eaten my bao there and gone to eat at the bao truck, then the hair salon, then one of the pop ups we've done, and now here at Fat Choy. It's a pretty awesome feeling to be able to share these with everyone.

Have the guests at the Eureka embraced the restaurant?
JW: Yes, they certainly have come a long way from hoping we close to getting wings and dipping their toes into Asian territory and ordering potstickers, wonton soup, or even venturing into the unknown and getting sesame noodles.

Six months in, what changed?
JW: Less smoke, more customers, Yelp ratings improved, and our team changed a little. The word is continually getting out to more locals and we're seeing a lot more taxis pulling up to the Eureka dropping off tourists.

We have started to find our identity. When we first opened, some of our guests would say our menu was not authentic. It's not traditional, but it's cooked and served with a lot of heart and soul. I just wanted to focus on delivering a great experience. To me, that is authentic.

Does it seem like it's been a year?
JW: Can't believe it's been a year. Seems like just yesterday that we started on the truck. However, in some ways, time does help change things and people have certainly changed their perception about us, about Eureka Casino, and this neighborhood continues to get better.

What's the must-order dish of the moment?
JW: Any time there's a special, go for the special. Otherwise, order wonton soup and add noodles to make it a meal.

SS: The pork belly bao and Peking duck bao continue take up space on every single table. Also, it's not widely known outside of the Eureka, but we serve awesome Buffalo wings.

What's in store for the future?
JW: We hope a second store's in store, as all businesses want to grow. We hope to continue events that help spread and promote cultural awareness, like a class on tea ceremonies. Things as simple as Taiwan being different from Thailand are some times an eye-opener for some of our guests. We hope bao becomes like the gyro. At one point, people probably didn't know what a gyro was. It is now very widely known.

SS: We are hoping to continue growing ourselves and our team. The menu will continue to evolve. A Fat Choy pop up series in Santa Monica at a nice cafe on Wilshire and Sixth Street is currently in the works for the springtime. If the right space opens up to us, I'd love to open a second Fat Choy...or a classic Taiwanese Beef Noodle Soup joint. That's my ultimate comfort food.
· All Coverage of Fat Choy [~ELV~]
· All One Year Ins [~ELV~]