Looking for "donkey sauce?" Head right this way. Filled with exclamation points, a pathological aversion to capitalized letters and an equally rebellious rejection of conventional grammar, the menu for Guy Fieri's Vegas Kitchen & Bar is now rockin' the Strip.

The pages are stuffed with "awesome," "punch" and little nuggets of the thought process that Fieri and his "krew" used to create the dishes. And true to his word, these dishes don't replicate his other restaurant menus. This can truly claim to be an only in Las Vegas experience. 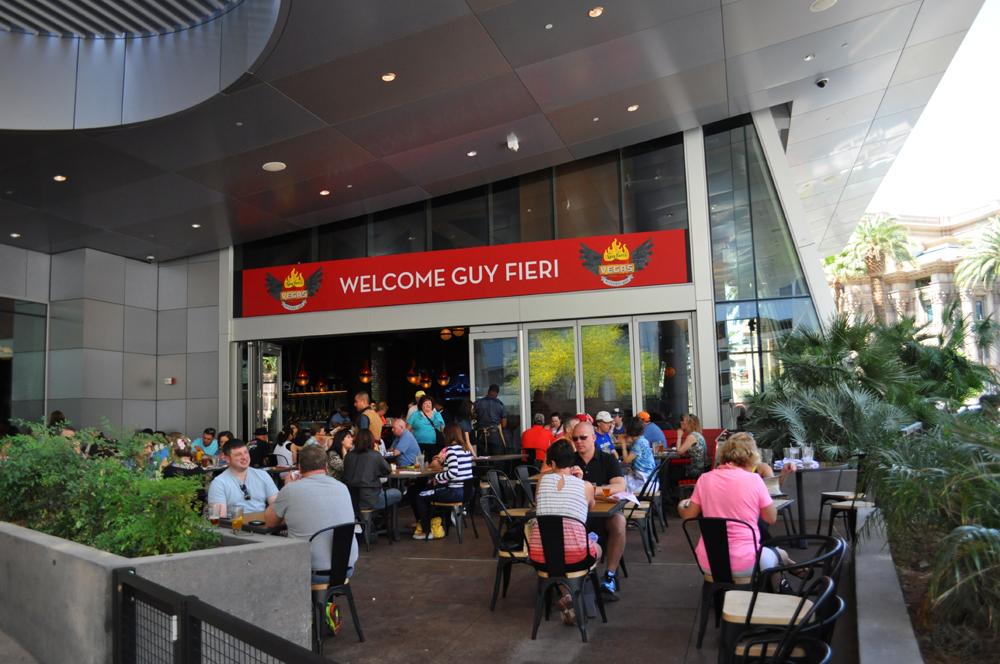 Guests seated in the patio area are already braving the music bleeding over from the Carnaval Court bar located just across the plaza and puzzling why the largest restaurant sign on the property names the joint "Welcome Guy Fieri."

Since the menu descriptions are only written in lower case, "ltop" proved a puzzler, until is was made clear LTOP is a Guy-ism for lettuce, tomato, onion and pickle. SMC, filling in for "super-melty-cheese" has thankfully been dropped from the current final menu text. But for those looking for "awesome," here is a menu unafraid to make that claim and make it often.

Big Bite Burgers
Welcome to burger nirvana. All of our richly marbled 100% USDA choice ground beef is smash-grilled! Your taste buds will thank you.

All our wings are trimmed into "lollipops" so they're super easy to eat, then we brine & roast each one before frying & tossing in one of our off-da-hook wing sauces.

Fireball Whiskey Wings $14
These wings are certainly not for the faint of heart & should probably be illegal. Classic buffalo sauce + fireball whiskey meet to ignite a flavor explosion of epic proportions. Try Guy's blue-sabi sauce to put out the fire!
Double Barrel BBQ Wings $14
Guy's signature bourbon brown sugar BBQ is bold & flavorful + we drench these wings in it!
The General's Wings $15
General Tso's done Guy style, so forget the chopsticks. We make these wings a flavorful phenomenon with a sweet + spicy sauce that will make your head spin!
Parmageddon Wings $13
Our breaded chicken parmesan wings + apocalyptic marinara. They might not end the world, but they'll end your hunger!