Three Restaurants Shut Down by the SNHD

Share All sharing options for: Three Restaurants Shut Down by the SNHD

Sam Woo BBQ at 4215 Spring Mountain Road was shut down by the Southern Nevada Health District after a routine inspection revealed 51 demerits on April 22.

SNHD inspectors found the food wasn't cooled properly or held at the proper temperature, food was unprotected from potential contamination, ineffective pest control measures and more among the violations.

All other inspections dating back to 2011 resulted in an A grade. 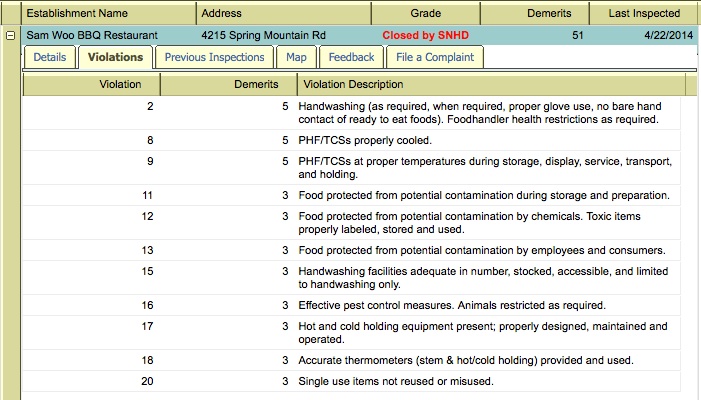 Food truck Coast 2 Coast was shut down by SNHD after a routine inspection on April 22 found an imminent health hazard. A lack of adequate refrigeration caused the shutdown.

Florida Cafe, the Cuban restaurant at 1401 Las Vegas Blvd. S., was shut down by SNHD inspectors after a re-inspection on April 21. The 30-demerit inspection found spoiled food, staff not properly washing their hands and more. The restaurant earned the same number of demerits at its first inspection April 7.