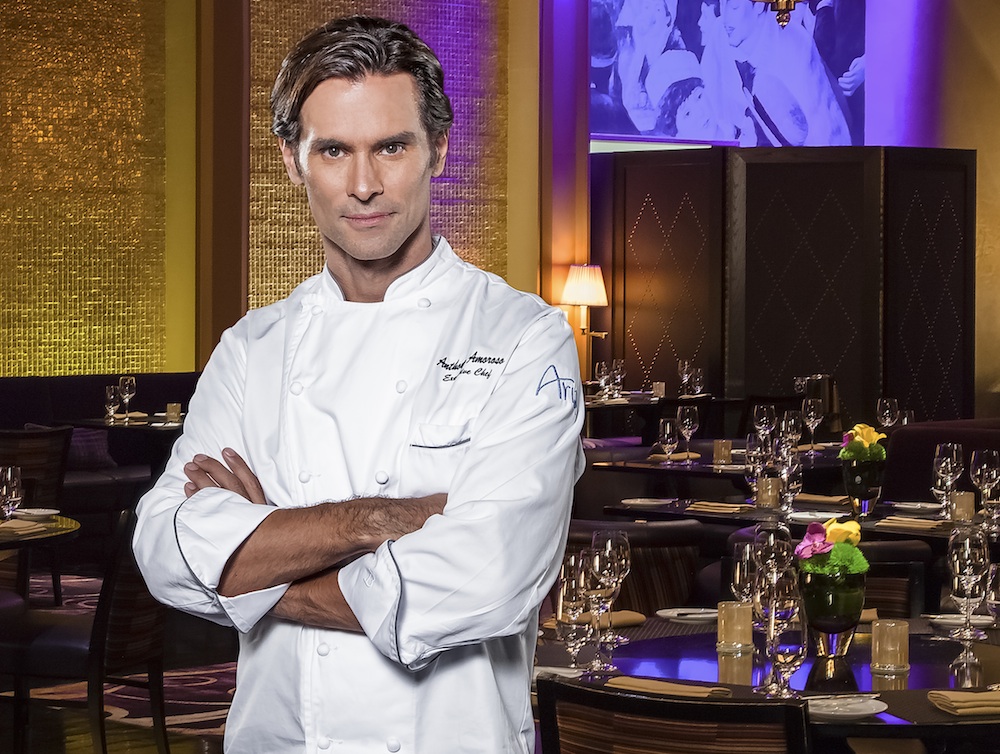 New Jersey native Anthony Amoroso Jr. dove into his culinary education in Jersey City earning a degree in culinary arts studies from Hudson County Community College. Amoroso's first position as sous chef was at the Hilton Short Hills in New Jersey in 1999. A year later, Amoroso set off for New York City to work his way up from sous chef to chef de cuisine of Rick Moonen's Oceana Restaurant. He even collaborated with Moonen on opening Branzini Restaurant in 2002 and RM in 2003. Amoroso then moved to Vegas as the executive chef at Fiamma Trattoria & Bar at the MGM Grand and later became the executive chef at Michael Mina at the Bellagio. Mina asked Amoroso to return to New Jersey in 2009 to become executive chef at his Seablue restaurant at the Borgata. In 2010, Amoroso defeated Iron Chef winner Masaharu Morimoto on Iron Chef America. Amoroso joined BR Guest Hospitality to be the corporate executive chef and helped open Sammy D's at Harrah's Atlantic City and Atlantic Grill Steak & Seafood at Caesars Atlantic City. Now he's the executive chef of Aria.

Here, Amoroso shares some of his favorite places to dine in Las Vegas. "Places I love are affordable, casual, come as you are spots with great food and a great atmosphere," he says. "The type of food I like to eat when I'm not working are things I don't eat all the time but I crave like everyone else. I'm lucky that I can find what I crave in Las Vegas and I can find the very best of it."

Which restaurants do you turn to when you're not working?
Lemongrass, Due Forni and Monta Ramen.

What dishes are most memorable?
At Lemongrass, the Thai beef salad with grilled ribeye, lemongrass, kefir lime, fish sauce, chilies. The chef adds fresh mint and red grapes at the last second and pays great attention to detail. My biggest advice is to not let an approachable restaurant such as Lemongrass fool you into thinking it is anything less than spectacular.

I order any of the pizzas at Due Forni because it's all about the dough. They use two different kinds of dough and two different ovens. One is cooked to a thin and crispy texture and the other is a more traditional, Neapolitan style, a little thicker with just the right amount of chew. Both kinds of dough are delicious and they have two separate ovens to do it in.

At Monta Ramen, I order tonkotsu ramen with miso and add Omsen tomago. They create a very rich pork broth and the addition of miso gives it just the right amount of saltiness as the pork itself is sweet. Omsen tomago is the soft-boiled egg with a loose yolk and a distinct richness to it. Monta Ramen is in the truest sense a traditional ramen shop.

Why do you enjoy going there?
Lemongrass for the light, fresh Thai flavors. Due Forni when I'm in the mood for pizza. Monta Ramen, obviously, for the ramen.. the traditional, very well made ramen.
· All Coverage of Aria [~ELV~]
· All Dining Confidentials [~ELV~]