Share All sharing options for: Guy Fieri Announces an Opening Date for His Vegas Invasion of Flavortown

Guy Fieri rolled into The Quad today in a red Camaro with the UNLV marching band and cheerleaders on hand to announce an opening date for his Guy Fieri's Vegas Kitchen & Bar at the front of the resort. Mark your calendar for April 17, when Flavortown takes over the Strip. 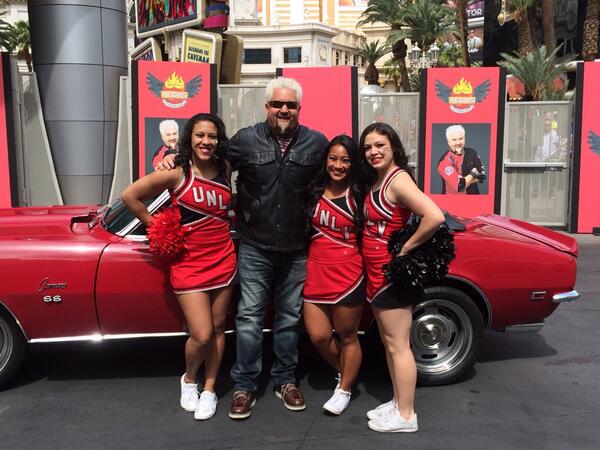 He served his "award winning" bacon mac n cheese burgers and "Guy-talian Fondue Dippers" with breadsticks are wrapped in pepperoni and then baked to the crowd. Fieri plans to serve a 100 percent revamped menu covering dishes from Asia, Mexico, Italy and the United States, including his Vegas fries.

"Even the things that have been old school staples in my repertoire have gotten another spin. It's that old saying, "You play better on a better team.'" 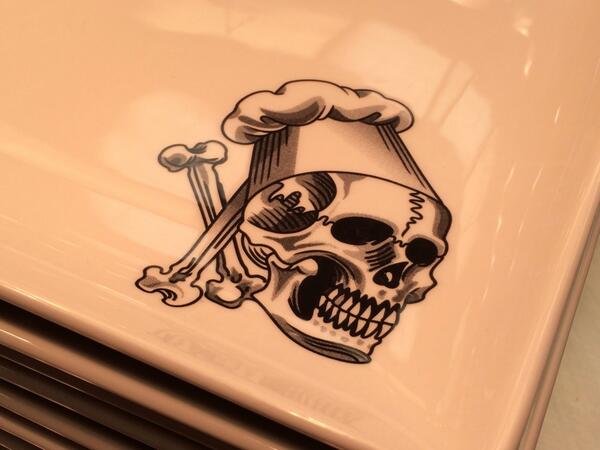 Each one of the plates at features this "Kulinary Gangsta" logo, inspired by one of Fieri's tattoos.

The two-level, 10,000-square-foot restaurant plans to serve breakfast, lunch and dinner as well as a late-night dining menu and brunch. The restaurant features outdoor dining accompanied by the nearly nonstop live music at Harrah's Carnaval Court at the valet porte cochere at The Quad's main entrance.
· All Coverage of Guy Fieri [~ELV~]