The Southern Nevada Health District shut down two restaurants — one with two imminent health hazards and another repeat offender that failed a re-inspection.

New Jumbo Buffet at 1617 S. Decatur Blvd. was shut down by the SNHD after a re-inspection on April 2. Ineffective pest control measures, food not cooled properly and more were among the violations.

The restaurant has been shut down twice by SNHD since 2008, and generally it appears as if initial inspections resulted in C grades, close to shutdown, followed by A grades after re-inspections. 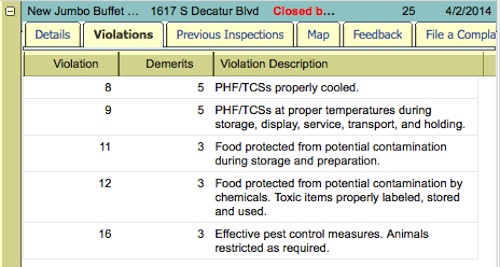 Tacos La Carretta at 4181 W. Pioneer Ave. was shut down by SNHD after inspectors discovered two imminent health hazards during a routine inspection on April 3. The restaurant had no electricity and no potable or hot water.

One other inspection of the place in 2012 resulted in an A grade.