UPDATED: Wieners Circle Is Bringing the Sass to Vegas

Share All sharing options for: UPDATED: Wieners Circle Is Bringing the Sass to Vegas

Infamous Chicago hot dog stand The Wieners Circle is infamous for two things: their "Char Dogs" and the after-hours, mind-bending, verbal abuse screamed at each other by staff and the true instigators, the scores of customers who intentionally flock to the Lincoln Park location to be called every imaginable name under the sun.

The hours of N.S.F.W. video clips on YouTube will soon have a second and third source of new material now that The Wiener's Circle is coming to the Red Rock Resort and the Santa Fe Station. And the co-owner confirms he was approached to teach the Las Vegas staff how to serve up some hardcore sass.

The story first revealed and confirmed by Eater Vegas in March was completely ignored by local media, but nationwide and naturally in Chicago, the incongruity of a restaurant dropping multiple four-, six- and 12-letter word tirades into a potentially family friendly environment was quickly recognized.

Reporter Mike Thomas of the Chicago Sun-Times tracked down Weiners Circle co-owner Barry Nemerow, who explained he was even sending his legendary manager Poochie Jackson to Las Vegas to help "train employees in customer disservice," something that has excited his other team members.

"They all heard about it and they all want to go," he says. "I told them maybe they can make guest appearances here and there, but nothing permanent."

"They thought we had a unique thing, the way we handled the customers, with the screaming and yelling," Nemerow says of the Vegas operators. "And they wanted to kind of duplicate that. A little bit less than we do. The hotel won't let them go too crazy."

As at his Chicago stand, Nemerow says, verbal abuse will accompany each order — possibly courtesy of "theatrical people who aren't working. Wannabe actor types." But he has nothing to do with the hiring.

According to Nemerow, Las Vegas investors first approached him in the summer of 2012 after seeing a sketch on Conan O'Brien's TBS Conan talk-show .

At Red Rock, The Weiner's Circle will take over the shuttered Los Angeles-based hot dog joint Pink's, located in-between the resort's Sports and Race Book and dedicated poker room. A location not extremely welcoming for family groups or youngsters.

However, over at Santa Fe Station, The Weiner's Circle will replace the recently shuttered Johnny Rockets burger joint located inside the resort's bowling alley and close to the kid friendly video arcade.

A business license has also been created for an additional Wiener's Circle setup at Santa Fe's Race & Sports book. Eater Vegas was asked not to reveal the precise location back in March because Johnny Rockets personnel had not been informed of the imminent closure.

An opening timetable is yet to be revealed, but the Red Rock branch is hiring staff this week. The job proposal makes no mention of the Chicago location.

The newly revealed logo for these ventures does clarify one issue, by spelling their name as "The Weiner's Circle." While the Chicago original has been willing to drop or add an apostrophe to their own name at will, most of their prominent Lincoln Park signage does without. 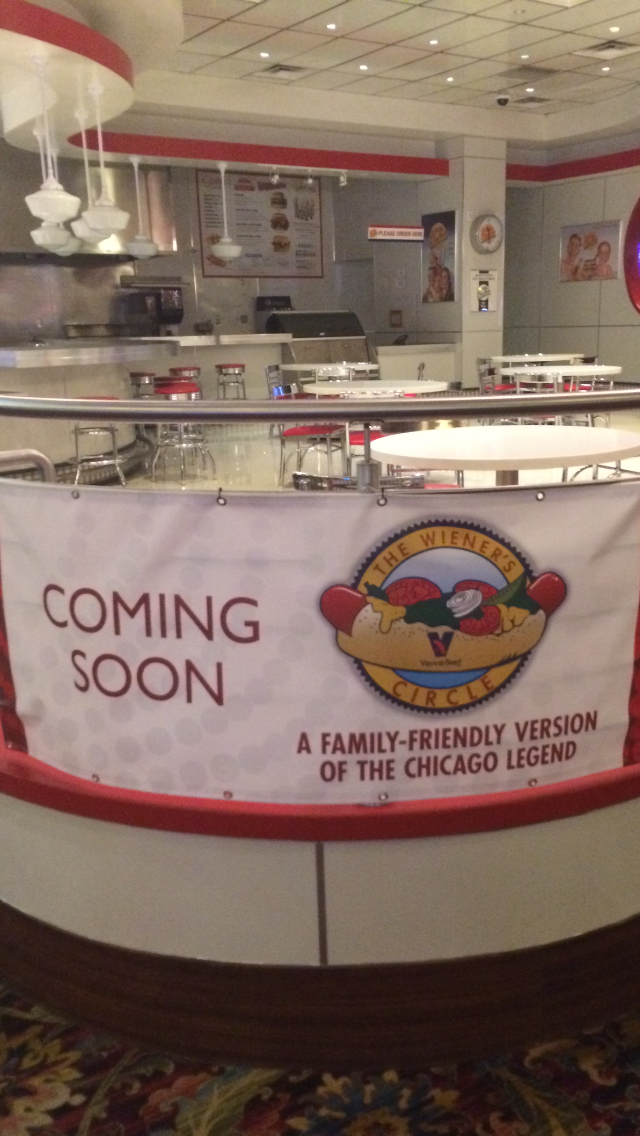 UPDATED: A rep with Weiner's Circle says that all three locations will be family friendly and included the above photo from one of the two coming locations at Santa Fe Station as further evidence that the staff will not berate guests. She also noted that the three Vegas restaurants are part of a licensing agreement.
· All Coverage of The Weiners Circle [~ELV~]
· All Coverage of Station Casinos [~ELV~]