Share All sharing options for: Bob Saget on Dining Out with Jeff Garlin and Partying with John Stamos in Vegas 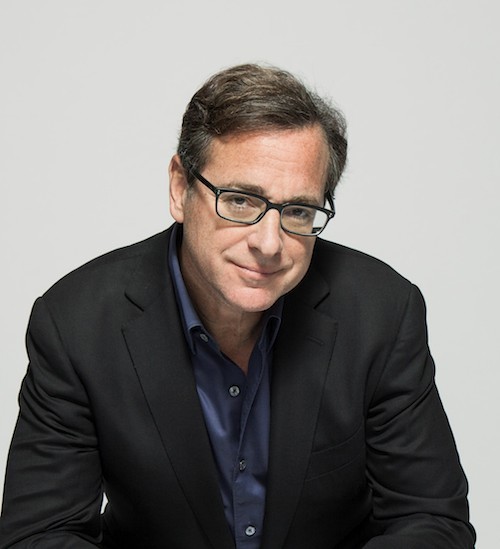 Comedian Bob Saget hosts Cool Comedy — Hot Cuisine, the event benefiting the Scleroderma Research Foundation at the House of Blues at Mandalay Bay on Thursday, June 5. Saget says he's not going to be dirty, but he "may drop a couple of F bombs." He might do some comedy on stage with Ben Folds, the special guest for the night. The Dick Bright Orchestra puts on the music. And a special guest comedian will be on hand. "The comedian must remain anonymous. I can't say anything. I don't do anything that upsets anyone," Saget says.

Susan Feniger and Mary Sue Milliken of Border Grill and Rick Moonen of RM Seafood and Rx Boiler Room bring the food. And for those who can afford it, tickets start at $150 for balcony seats where passed appetizers will roam. "I might do a reach around with people," he says. Everyone leaves with an autographed copy of his book Dirty Daddy.

Here, Saget talks about his memories of Vegas, his favorite restaurants, dining with comedians Jeff Garlin and Jeff Ross and he even throws in some John Stamos stories for good measure.

Do you remember your first trip to Vegas?
I do. I was, oh my God, I was 21. I went across the country Sam Domsky, who's now a dentist. He was my comedy partner. We went from Philadelphia to Los Angeles. It's not like we met Bugsy Siegel. We went to the Tropicana and the Riviera. I don't know why I think I saw Buddy Hackett. We stayed in the cheapest package we could find. It was the low rent trip.

I used to do the Dunes Comedy Store. They knocked it down not just because of the show I did. I hosted some of the the closing acts with Sam Kinison and Roseanne. We had some fun experiences with the late-night buffets.

Do you have any favorite restaurants you like to visit here?
You go there to have the meal you would have in New York. And I do. There's a couple places I like. Joe's Stone Crab — that's become more of my place. Il Mulino and Rao's. Put the cheese and salami in front of me and I just keep eating. Just give me giant shrimp and a big piece of meat.

Joe's was with Jeff Garlin. Jeff Ross and I came out there for his 50th birthday. It was his dream to go to Vegas with me and Jeff Ross, see Don Rickles and eat at Joe's Stone Crab. And it was pretty wonderful.

Last time I was there with a buddy. We hung out at the Love show. I wasn't holding my buddy's hand. I ate somewhere like Kumi, a fusion place. It was inside outside. It was like eating in the Pirates of Caribbean. There's nothing I like more than eating in a rainforest.

Border Grill just foodies the hell out of me. I don't know why I didn't mention that sooner.

Do people approach you while you're dining out?
Sometimes and the only problem is my mouth moves without control when I eat. It looks like I'm some creature. I'm an unattractive eater.

I rarely say anything mean to anyone, but you don't want to fist bump if eating you're with your hands.

I also have a thing. When I eat something really good, it looks like I have a sad face. I'm concentrating on the food, and that tells the rest of my face to stop. I shut down and my face goes south. Literally, it's like I'm eating food blindfolded and trying to figure out what I'm eating.

What about nightlife? Do you ever go out after a show to unwind?
One of my friends owns 1OAK, so I'll go there. I don't club it as much as I used to.

I have a John Stamos story for you. It was my birthday. We've done Vegas a few times. He had to feed me one night. We went to an Elvis impersonator show. I couldn't function. I was so drunk. He cut up my meat at the Hilton and sent it to me. He took my shoes off. That was one experience.

Another time, I was with Stamos for his birthday and we stayed in the bowling suite at the Palms hotel. I remember bowling in a robe and a cigar. I looked like I was on Entourage. A friend bowled and the ball return stuck. I reached down and dropped my cigar into the back. Dumb friend, he bowled. It was too late. I got my hand caught on the ball return and now I have a scar on my hand. That night we went to Tao. The was five to seven years ago.

I enjoy it sometimes. I'll go there and come back.

Garlin and Ross, they just go to bed early.

What was the first thing that shocked you in Las Vegas?
That's a good question. I guess the fact I found it most interesting the people I hang with. Having been a comedian for 37 years, I always end up talking to the people who work in the establishment. I'm always surprised that everyone gets off work and goes to the club after or to a restaurant after working. You go to work at 5 p.m. or 8 p.m., work all night, done at 4 a.m. then go out and sleep at 8. It's the party business.