Share All sharing options for: Ronnie Rainwater Talks About 15 Years of Delmonico 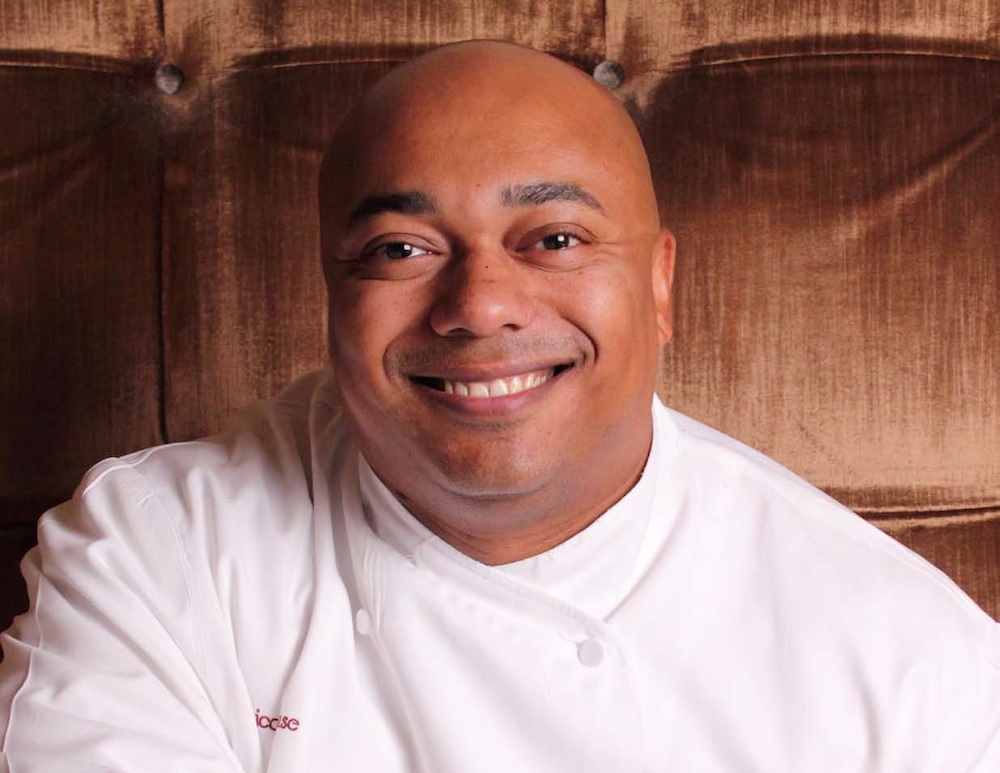 Can you believe it's been 15 years since Emeril Lagasse's Delmonico Steakhouse opened at the Venetian? The steakhouse with a Creole flavor opened May 3, 1999, and all this week showcases some of the most popular dishes over the past 15 years. Chef de cuisine Ronnie Rainwater, who started at Delmonico as a line cook about a month after the opening and worked his way up, put together the menu while beverage manager Max Solano created a $115 NOLA Presidential cocktail with Pappy van Winkle 15-year and a 24-karat edible gold leaf. Here, Rainwater talks about how the restaurant changed over the years, what it's like when Emeril is in the house and perhaps something you never knew about Delmonico.

You've been at Delmonico almost from the start, right?
I started as a line cook in June 1999. I was on vacation in Vegas but working at the Playboy Mansion in Beverly Hills with my then girlfriend, now wife and friends. She urged me to fill out an application, which was kind of funny because she never wanted to live there. The chef at the time came out and talked to me. Two weeks later I was living in Vegas.

The restaurant opened on May 3, and I started about a month in. It was very, very new. I was just out of culinary school and worked at the Playboy Mansion for about eight months.

Why did Emeril decide to open a second location in Las Vegas?
Well, the Fish House had been open at the MGM Grand for a while. I think it was just a happening thing at the time and a great location and facility.

What have you learned in the first 15 years?
I started off as a line cook and really just learned about how chef Emeril feels about ingredients, great meals, service and product such as wine lists and aged beef.

I got a chance to see the whole restaurant world evolve. The celebrity chef steakhouse was not as big as it is today. I've seen the city evolve and tap into local farmers' markets and ingredients. That wasn't as abundant then as it is now.

What's the difference between Emeril's Delmonico in New Orleans and here at the Venetian?
New Orleans came first. That's where the name comes from. It sits on a streetcar line on St. Charles there. It was renovated and reopened in 1998. It's the classic New Orleans dining experience.

That was a commitment since day one. We started with one room for aging beef and as we built a great reputation, we expanded to two aging rooms. They're not just for show; they're working aging rooms. We do our aging and cutting in the restaurants.

What were you thinking about in terms of design of the restaurant?
Simple. A lot of the thought was this Italian wine cave with large barrel ceilings but fairly simple. Were were trying to keep it simple, focusing more on the food and the product. We have that cobblestone room with those large stones.

What's changed over the course of the years?
Like I mentioned before, we're really focused on the seasons. A lot of those things have come a lot closer to us like tomatoes and apples.

The city itself has changed. When we opened at the Venetian, we were the just the last stop at the wall. Now there are multiple steakhouses in the hotel. There are more restaurants to choose from.

One thing that hasn't changed is our commitment to great products and staying fresh. The food here is reliable regardless whether you were here 10 years ago or last week.

We also have a commitment to our wine and whiskey programs, with one of the larger selections on the West Coast.

What are some of your favorite memories over the years?
You know, when Table 10 opened, spending time with Emeril in the building. We've been able to have great wine dinners and Wine Spectator events.

What's the must-order dish of the moment?
Just this past week we added a bacon appetizer that's kind of a big thing. It's is kind of a big thing. It's karbuta bone-in pork belly cured with honey and apples and smoked with applewood for five hours. It comes with pickled watermelon rind and Abita Root Beer. It's really a fun dish. I don't think anyone else is doing a bone-in bacon.

How about for steaks?
Our house aged, bone-in rib eye, that's our steak. It's hand cut. We call it the Cowboy and it is our most popular.

Tell me about the special menu this week with favorites from over the years.
It's a throwback to some of those original dishes, the dishes I had to make on the line when I first started. We had three from salads, appetizers, entrees and desserts. I had to go into the archives to remember some of the dishes.

What's on tap for the future?
You know, I think some of what we've been doing. Staying committed to the aging program and continuing to look at our wine programs and spirits program. Staying consistent. Really just being reliable for a great experience and striving to be the best in the city. We want to continue to remain strong. I think that's a tough thing to do in a city that changes so much.

Tell me something I don't know about Delmonico.
We've been open for lunch for 15 years. Our lunch menu is completely different than our dinner menu. It's lighter than big steaks.

I still hear to this day that people don't know that we serve lunch.

We've kind of changed our thought process on that. We have big juicy hamburgers, lobster sliders, chicken. That's kind of the hidden part of Delmonico.
· All Coverage of Delmonico Steakhouse [~ELV~]
· All One Year Ins [~ELV~]