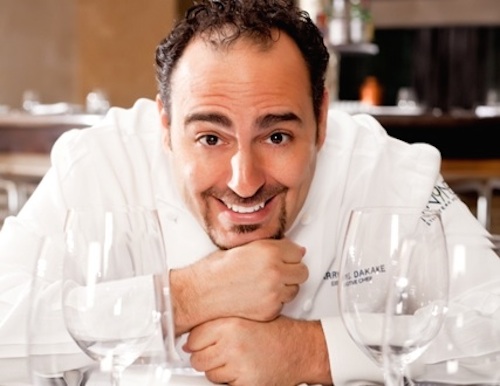 A native of Providence, R.I., Barry S. Dakake grew up in a family where cooking was a tradition. He went to the market twice a week to pick out fresh vegetables and meat for the family's weekly meals. Dakake earned his associates degree in culinary arts from Rhode Island School of Design in 1990. He went on to work with chef Charlie Palmer at Aureole in New York. He helped Palmer open Aureole at Mandalay Bay and then Charlie Palmer Steak at the Four Seasons. He then opened N9NE Steakhouse at the Palms 2001. Here, the favorite chef among the foodie crowd share some of his favorite restaurants in Las Vegas, including a custard spot, a great place for a slice of pizza, a spot for a power lunch and a great romantic dinner. Read on.

Which restaurants do you turn to when you're not working?
Lotus of Siam, Musashi Japanese Steakhouse and the Italian American Social Club.

What dishes are most memorable?
Lotus of Siam: Lobster in garlic pepper sauce, deep fried lobster sautéed in garlic sauce with roasted Thai chilis. It's a Maine lobster, which is my favorite lobster, and you get a taste of New England, Thai style, created by James Beard award winning chef Saipin.

Musashi Japanese Steakhouse: Beef Negimaki made with green onions wrapped in beef with teriyaki sauce. The green onions and the beef really complement each other. The special marinades that chef Tiger uses are simply delicious. I also really enjoy eating the steak lovers special tepanyaki, which consists of Kobe beef, New York sirloin and filet mignon. The dish also includes bean sprouts and fried rice made right in front of your eyes.

Why do you enjoy going there?
Lotus: I go there because of the exceptional Riesling wine list and the food is second to none plus chef Saipin is a personal friend of mine.

Musashi: At the end of the night and the smoke is cleared after doing 500 covers at N9NE, Musashi is a late-night retreat where you can sit back drink some sake and have a bite to eat while chef Tiger puts on a show. You have to ask for him to cook for you at the tepanyaki grill. Reservations are required for him to cook for you.

Italian American: This is the only restaurant in Las Vegas that reminds me of the Italian restaurants back home in Providence on Federal Hill. Their style of food and flavors come from the heart.

Anything else you want to add?
For custard, I am a big fan of Luv-It Frozen Custard on Oakey. They only spin five flavors a day so you may want to call before you go. I like black raspberry but I'm still waiting on them to make it for me again so I usually grab the chocolate or lemon. It's cash only, what a shake down. I love it.

I also like to grab a nice, thick slice of Sicilian pizza and Italian wedding soup at New York Pizza and Pasta on Jones and Sahara.

For a great power lunch, I enjoy eating at Eat downtown.

For a romantic dinner, I like to go to Charlie Palmer's Swan Court at Aureole in Mandalay Bay.

I believe Las Vegas is the chef capital of the world and any culinary student that graduates should take a gamble in this city with their career. To be big, you have to dream BIG.
· All Coverage of N9NE Steakhouse [~ELV~]
· All Dining Confidentials [~ELV~]