First Peek at Mercadito and Double A at Green Valley

Share All sharing options for: First Peek at Mercadito and Double A at Green Valley

While Chicago import Mercadito is busy causing a stir with their new arrival at Red Rock Resort, over at Green Valley Ranch, an even bigger takeover is starting to take shape. As Eater Vegas first revealed, projects from parent company Mercadito Hospitality will be replacing the shuttered Terra Verde with an expanded Mercadito concept, plus they'll be adding a new Tippling Hall cocktail and dining room. But there's much more.

It can now be confirmed a cocktail lounge modeled after their Double A lounge concept will be located inside the Mercadito restaurant. And the eatery will be adding Mercadito Counter, a "Mexican Deli" facing the casino floor. 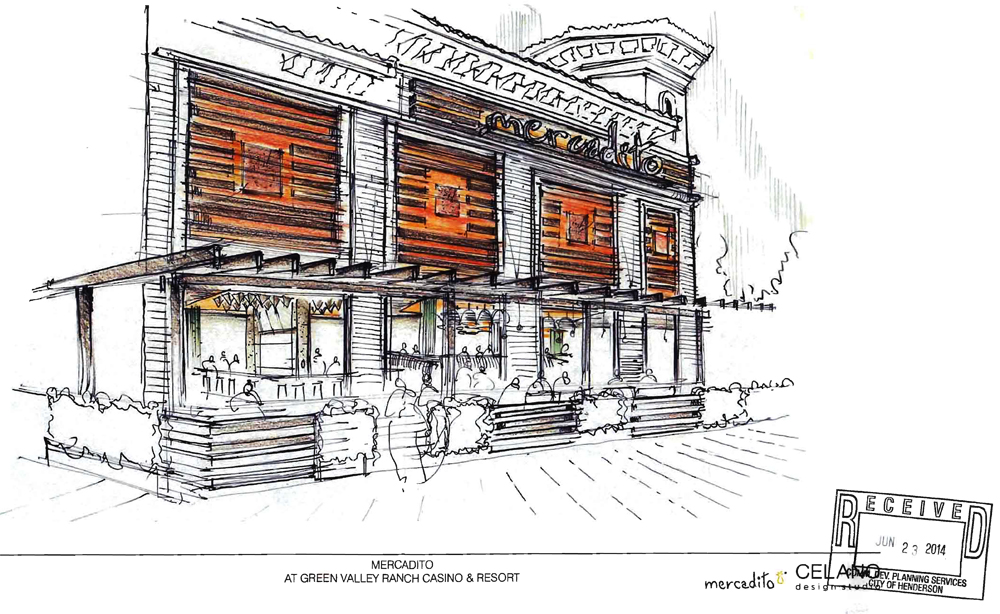 Mercadito will take the shuttered Terra Verde Italian restaurant space and make ample use of the patio with room for 88 guests. "Wood accents" will be added to exterior and expand on the trellis and greenery design. Diners can enter directly from the patio or through the casino floor. There are two lounges, one on the patio or an area filled with 18 close to the long bar that can host another 16. The main dining room can welcome 113 diners and features a mixture of regular tables and booth seating.

By the front entrance is Mercadito Counter, a new fast concept to be launched first in Chicago soon and made the Eater Chicago "Most Anticipated Openings" list earlier this year. Tacos, tortas, "Baja hot dogs" and "gordita sliders" have been hinted for the menu. There are 10 seats at the counter, but food can be ordered to take away.

And inside Mercadito itself, within its own room, will be Double A. It's designated exterior entrance will lead you through the patio, or you can walk through the main dining room to find it. In Chicago, this is pitched as a speakeasy-style cocktail lounge, creating a "bar theater" where guests sit at a "mixologist's table," similar to a chef's table, to monitor the cocktail making process close up. At Green Valley, eight seats have been created around the bar, while 10 tables hug the walls of the closed in room. But it is easier to discover than the purposely cryptic Chicago version, housed underground, below their Mercadito restaurant.

Right next door to Mercadito, in the former Quinn's Irish Pub will be Tippling Hall, from Mercadito partners Tad Carducci and Paul Tanguay, the "Tippling Brothers," highlighting a food and cocktail menu described as "globally inspired " with a comfort food bias from chef and partner Guillermo Tellez. The un-stuffy atmosphere will include "drinking rituals" and perhaps the communal tables planned for the Chicago location.