The 24-hour Caesars Place lobby bar has re-opened after a $1,300,000 construction investment and expanded into a 3,673-square-foot sized footprint. The comically clueless Caesars Palace publicity department never updated the bar's Web page to show it shuttered, but the bar has been closed for six months, with posters on the plywood promising "every great hotel deserves an exceptional lobby bar."

Similar in style to many to Las Vegas bars, the upgrade has nevertheless added more plush seating, the design accent of back lit images of Roman statues and the new spot is easier for visitors to notice. This gold lounge offers a more welcoming and brighter appeal than the former, gloomy incarnation of the Galleria Bar. Less inviting are the price of the two new cocktails from mixologist Tony Abou-Ganim. The pair of concoctions will set you back $50 each. 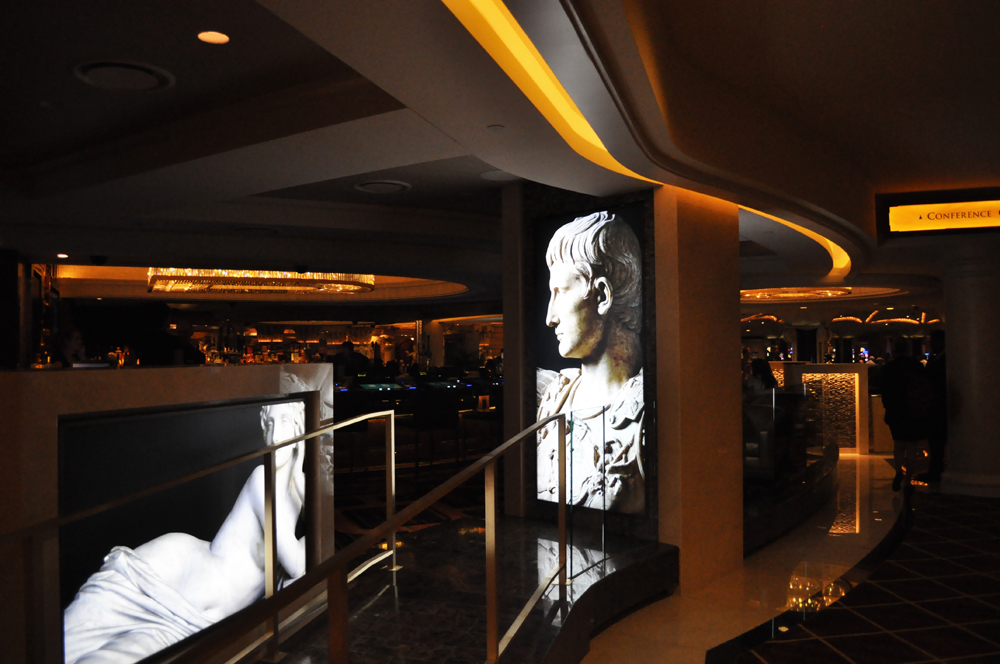 The "Specialties of the House," also priced at $15, feature the Flame Of Love cocktail, built with "Absolut Ekyx vodka, sherry, flamed orange oils." The menu explains this drink was created by Pepe Ruiz, bartender at Chasen's in Beverly Hills specially for Dean Martin.

The two $50 selections form Tony Abou-Ganim are the Tennessee Highball #2 made with Jack Daniel's Sinatra Select Tennessee whiskey and The Chairman's Manhattan also created with the pricey whiskey.
· All Coverage of Galleria Bar [~ELV~]
· All Coverage of Caesars Palace [~ELV~]