Kathy Griffin Knows How to Eat Vegas Like a Native 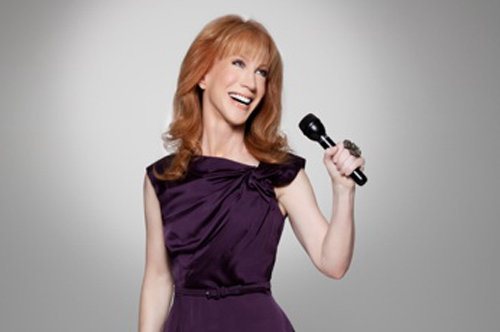 Gasp loud enough during Kathy Griffin's performance at the Mirage this Saturday and you'll probably hear yourself on a Grammy winning comedy CD. Her legendary barbed tongue has already won the big G for her "Calm Down Gurrl" album and this Vegas concert will be taped for her next release, recorded in a city she knows well.

Actress, comedian, writer and controversial foil to CNN's Anderson Cooper, Griffin joins the Aces of Comedy lineup with new material and inspiration from more than a handful of comedic targets working just down the Boulevard.

No stranger to the city, Kathy likes to dine out and shares some favorite spots after working a gig on the Strip.

How often do you get to Las Vegas?
Oh God, any excuse! Since this is Eater Vegas, I can be honest — the food and the comedy. I, of course, will provide the live comedy shows, but let's face it, in the touring industry it's all about the food. What do I eat before the show? Something light and healthy. What do I eat after the show? Often something cheesy, meaty, melty, and decadent…just like Vegas.

Do you remember your first trip to Vegas?
Like it was yesterday! Except it wasn't yesterday, it was several years ago. I did a commercial campaign for Kenwood Stereos. That's right, you're talking to the former Kenwood Girl! They had a corporate show they were putting on at Bally's and the acts were: Kathy Griffin — Kenwood Girl (for ten minutes), race car driver, Davy Jones, and the band, 38 Special. If that isn't enough to blow your mind, let me remind you in those days Vegas didn't exactly have the lineup of awesome restaurants we enjoy today. It was pretty much all buffets and then some buffets.

Do you have any favorite restaurants you like to visit here?
So many! My favorite sandwich in the world is at Capriotti's on Sahara. It's Thanksgiving on a Bun. Real pulled turkey, homemade stuffing, cranberry sauce, and mayo on a delicious roll. I love the "adult" bacon-cheese tater tots at Stack in The Mirage. The deep-fried Oreos at BLT Burger also at The Mirage. The key piece of information here is that you can get them as late as 3 or 4 a.m. I also love the terrace at Mon Ami Gabi at Paris. Delicious skinny crispy fries and also an incredible spot for people-watching on the Strip.

Do people approach you while you're dining out?
Yes, but luckily for both of us, they are often so blacked out or how shall I say, tipsy, that they probably don't remember the next day. The best part is, I have never had a drink in my life, so I get to be that sober person who remembers everything you did while you were being all drunk and acting a fool. Trust me, I will try to tell a couple of these stories in my act. The audience tends to get a little nervous during that section of my show.

What about nightlife? Do you ever go out after a show to unwind?
I go out after every show. My favorite thing to do is take a long leisurely walk up and down The Strip. It is the best free entertainment in Vegas. I would argue Vegas offers the best late night people watching in the world. Of course, one works up an appetite during such an auspicious activity. I may have to stop by the neon lit In-N-Out Burger, hopefully avoid a fist fight with any of the Mayweathers, or maybe stop by the secret pizza place at the Cosmopolitan in a wig and sunglasses. It's important that I am in disguise due to my global fame. I hope you understand.

What was the first thing that shocked you in Las Vegas?
The kids? Who the hell is brining their children in droves to Vegas and why are they all walking around the casinos and up and down The Strip at 2 a.m.? Now I am not offering my services as a nanny or an au pair, but put these kids to bed for goddsake!

What can we expect at your show?
You can expect the recording of this show to win a Grammy! Well, I hope it's nominated for a Grammy. I am the current Grammy holder for "Best Comedy Album." I'll be honest, on Saturday, August 9th, I'll be recording the show to try and get my 7th consecutive nomination. As for the material itself, I wish I could tell you what to expect. The most important thing you should know is that I don't exactly know what I'm going to say until about 2 minutes to showtime. I've gotta keep it loose and highly improvisational. Luckily the nature of my material is very conversational and ever-changing. My act is very story-oriented, not so much just a bunch of one-liners. I suggest you enter the Terry Fator Theatre with an open mind, as anything may fly out of my mouth. I am inappropriate, fearless and will stop at nothing to get your laughter.
· All Coverage of Comedian Confidential [~ELV~]